Kananaskis Country is located south of Canmore, Alberta just inside the western edge of the Canadian Rockies. Within this area are several provincial parks including the Peter Lougheed Provincial Park 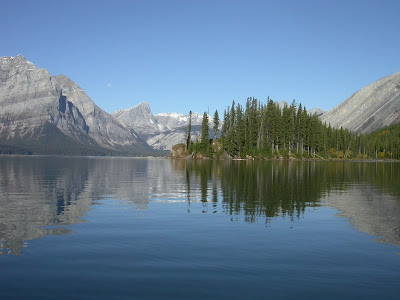 The Upper Kananaskis Lake [photo 1] is primarily a Rainbow Trout fishery, which can be fished from shore either at the boat launch bay, or at the Inter-Lakes outflow end where a float tube, Pontoon Boat or other watercraft is recommended. Watercraft is available for rental at several locations in the area. 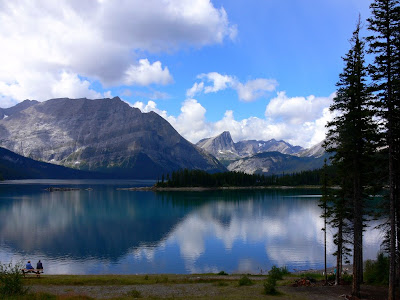 The Lower Kananaskis Lake [above] is predominantly a Bull Trout fishery with spring time offering excellent opportunities too.

The Bull Trout will rise to flies such as large skating Caddis, particularly at Sundown, however the majority of the sipping fish encountered on this lake will be Rainbows and Cutthroat Trout. 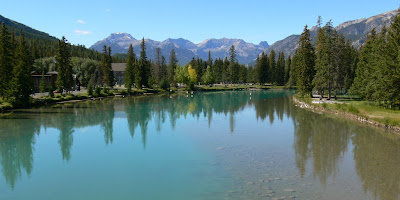 There is world class trout fishing in the Bow River, mostly Bull Trout which are strictly catch and release. Some professional guides use flat bottom boats like the one in the photo.

That is gorgeous. I love to fish but Mr. doesn't because he has no patience for fishing. Me? I don't care. I love the solitude and queite.

I was just telling Lana last night how much I'd like to do some fishing. Man that would be nice.

Breathtaking! Are the Bull Trout numbers in short supply, Barbara?

Pretzel, then you will just have to go on your own.

Charles, I think its these fishing posts luring you...come, come the fish are waiting.

Bernard, the Bull Trout is a threatened species in Alberta where there is a catch and release regulation. Years ago, other types of trout were introduced into the mountains, lakes and streams in the Province while the Bull Trout was allowed to be overfished in order to cull it. It is only recently the conservationists realized the danger the Bull Trout is in. They don’t spawn until in their fifth or sixth year, living to twenty years.

Beautiful pictures. It makes me long for a vacation that not's coming any time soon.

David, welcome. Yearning for a vacation away applies to me most days. Posting photos of tranquil or distant places eases some of the wunderlust for me and the stress of living in a crowded city. I guess I'm really a country girl at heart.