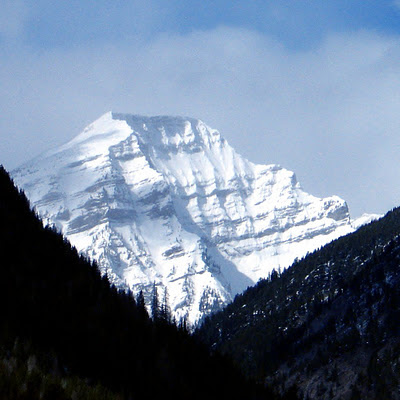 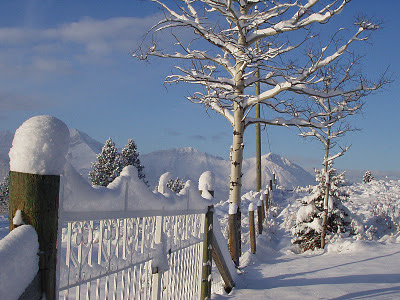 The winter weather has so far astounded me, at least as far as Toronto is concerned. I'm quite familiar with snow, frigid temperatures combined with blustery winds during the northern hemisphere's winters. This year has been a huge exception: almost balmy some days with rain followed by an odd day of colder temperatures with little snow only to change in an day or so to above freezing temperatures combined with rain showers. I wonder how the trees and bushes cope with such modified weather. Even the squirrels are out foraging.

The Mallards that inhabit the nearby creek don't seem to mind as long as they can paddle happily in free moving water. Though they do quite well with walking on ice. It's quite the sight to see them bobbing their heads in the water to cleanse themselves. A little too frigid for me.

For history buffs courtesy of Peakfinder.com: "The Flathead Range was named in 1924 after a tribe of Indians that lived in northwestern Montana. Some members of the tribe wrapped the soft-boned heads of their infants against a board so as to shape their skulls in a preferred manner." 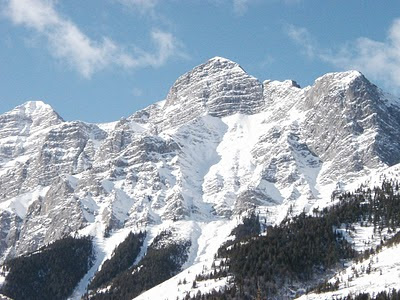 This photo is taken in Kananaskis Provincial Park, Alberta.


With the New Year of 2012 upon us, I wish everyone a blessed and glorious time. Personally, I'm looking forward to the change of ages from Pisces to Aquarius in December: a new age which is said to bring peace, harmony and joyous love between people in a new "Golden Age". We will be leaving the Age of Pisces where people were forced to be under the control of others. Now is the time for every person to take control of their lives and see what measures they can assist in implementing to help others less fortunate or to see that proper safety measures are taken in environmental issues.

There are always a variety of avenues to be considered: safe health products, better standards for drinking water...i.e. is chlorine really safe to use? Chlorine is used in a variety of ways: to safeguard tap water, in disposable diapers, in bleach, in swimming pools, etc. The dangers of chlorine and its by-products is that it is linked to various forms of cancer. Are the chemicals used in household products, medical prescriptions, personal care items such as deodorant, soap, perfume, cosmetics, safe? Most are not. It's time for people to take an interest in what products they use and how they affect their lives and the lives of their families. Corporate companies are interested in the financial bottom line, not consumers' safety.

On a less serious note, winter did not really arrive in Toronto. It came for a couple of days after Christmas with a scattering of snow followed by mild temperatures and today it's raining with a temperature of 4C. The weather folks say it'll be a mild winter. Global change or is the planet wobbling lower these days? Ever noticed how the sun is located in a different position than when you were younger. Pay attention to where it sits above the horizon and where it sets. In 2010 in April a friend and I noticed that the sun was at an odd height at 4pm: quite high in the western sky when it should have been lower. Who out there has noticed the ground tremble just a little in the late afternoon or evening? A tremble almost imperceptible, but there. Any tremble more than this and my birds act up. Do you pay attention to what is going on around you, or are you more concerned about what's for dinner, or what movie you're going to, or how many emails you have to slog through at work? Take a few minutes and take a good look around you, feel the quiet in the park or is there something else there you didn't quite see before.

Some food for thought for the coming year. Be alert to new things and just maybe you'll experience something profound and new.