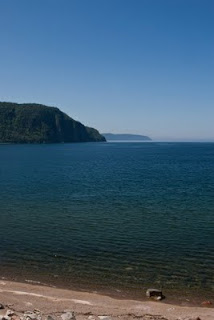 
In Lake Superior and in coastal streams and rivers, there are good populations of lake and rainbow trout, whitefish and three species of salmon. Inland waters offer good opportunities for catching lake and brook trout. To prevent the introduction on non-native species, live-bait fish is banned on interior park lakes.

There are canoe routes that range from easy to challenging, often involving stretches of white water. It is recommended to those wanting to canoe or kayak on the open waters of Lake Superior, that they be experienced enough to recognize and handle rapidly changing conditions. 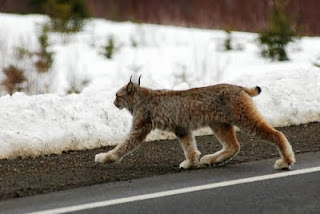 [2-Lynx - click to enlarge]
This is a lynx in the wild (all the other photos I looked at were taken in zoos).

Wildlife often seen in the park are moose, limited numbers of white-tailed deer due to deep snow and severe winters, and sometimes bear. Other animals in the park are red squirrels, martens, red foxes, Canada lynx [photo] and timber wolves.

More than 250 bird species have been identified within the park: great blue heron, gulls, loons and several varieties of warblers. 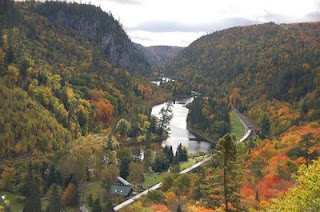 While Ontario Parks recommends the pictographs a warning sign awaits the visitor yearning to see these ancient drawings on the rocks, at the beginning of the trail: 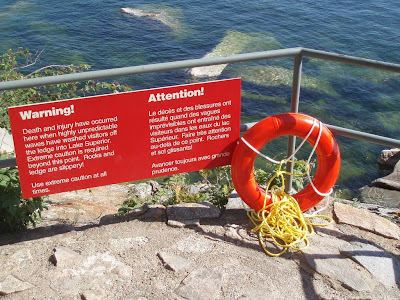 “WARNING: Death and injury have occurred here when highly unpredictable waves have washed visitors off the ledge into Lake Superior. Extreme caution is required beyond this point. Rocks and ledges are slippery!
Use extreme caution at all times.” 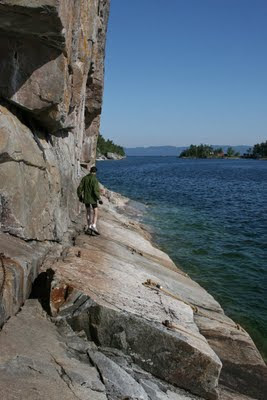 The photographer went despite the warning to the ledge where in this photo you can see ropes ringed into the rock ledges, just in case a wave comes along.


This is one of many pictographs in this location: 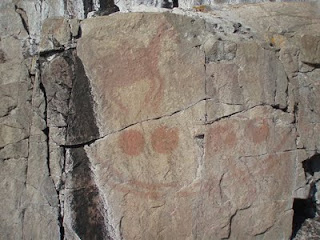 
To help you locate the above-mentioned areas, a map:

Wow, I love these pictures. Especially that Lynx. I would love to camp out at some of these sites, too. Gorgeous.

What a gorgeous, gorgeous place!!
I love that area - with lakes, forest and mountains.
Lukily there wieren't any big waves the day the photos were taken of the stone ledge. And the pictographs are fascinating.

Charles, photos often describe a place more clearly than words ever could.

Sam, the pictographs were painted by the Ojibway 200 to 500 years ago. Lake Superior is very deep, often storm conditions appear that are quite similar to those on the ocean. It seems pictographs are found in remote locations which I attribute to earth changes over the years.

my fave area of canada, other than the coasts....

I love these posts. One of my coolest hunting experiences was seeing a lynx while Elk hunting in Colorado. It walked about twenty five yards in front of me and never knew I was there. I'm not sure all of the differences between it and the Canadian Lyn x but the one I saw looked much smaller, more bobcat size but it had the distinct tuffs of hair on it's ears and was a slightly different color.

Travis, you may have seen a bobcat which is smaller, and their range is from southern Canada through the US to Mexico. The main difference is lynx have longer legs, can weigh up to 40 pounds and can hunt in deep snow whereas bobcat are unable to. A good place to read about wild cats is at the site of International Society for Endangered Cats: http://www.wildcatconservation.org/Canadian_Lynx_(Lynx_canadensis).html
This site provides an in-depth description of the animals, their habitat and what measures are being taken to protect them.

Hi Barbara! Sorry it took me so long to figure out who you were! Thanks for stopping over at Willow Manor and signing my guest book. I am also very flattered to see my place on your sidebar. Lovely blog! I'll be back for a visit soon.

What a beautiful place !!

Willow, welcome and come back any time to browse. The photos of gardens in your blog are lovely.

Debbielou, when you visit Canada the train trip from Sault Ste. Marie allows for easy access to Lake Superior Park.

What a special treat a visit to your blog is. I learn so much,see beautiful scenery and animals I have never seen (the lynx today and the black squirrel featured a while back). You inspire me to visit this part of the world one day. So much history.Very enjoyable.

Hi Barbara. I loved these photos, especially the one of the pictograph.Very cool.

Pam, it's certainly a pleasure to post brief articles on nature and the environment.

Sarah, sometimes the research into the specific parks turns up interesting bits of information, such as Agawa Canyon and the pictographs.

My brother in law attempted to film a documentary about the pictographs, but his canoe got swamped in one of those mysterious storms.

He later wrote about the experience in Chicken Soup for the Canadian Soul. He's convinced the Spirits prevented him from filming the rock paintings.

Beautiful photos, it makes me want to embark on a weekend road trip!

Sandra, welcome. When the unexpected storms pop up on Lake Superior you'd almost think it was another Bermuda Triangle.

The country of northern Ontario is very beautiful and calls to my inner soul too.

Thank you for stopping by Brain Freeze. Come back any time.
You have some gorgeous photos here, and the lynx is just terrific.

What a beautiful place and your pictures are gorgeous! Thanks for visiting my blog and linking me. I've been sick, so it took me some time to stop by. I'm going to try and slowly catch up over the next week.

Driller, in future posts I will be writing about other animals, birds and fish found in Canada.

Lin, welcome. Your own photos are an inspiration for any creative person.

OMG, that lynx isn't full grown? A beautiful animal but I'm not sure I'd want one of them wandering into camp.
Great photos.

Linda, the lynx may not get any larger but they do stay away from people generally. Toronto has it's share of racoons that co-exist with us. Sometimes they're a nuisance, but if you leave them to their business everything is fine. If they are a nusiance, they're trapped and let loose outside the Greater Toronto Area into a natural habitat where they can thrive. In my neighbourhood the racoons like to raid the garbage dumpsters, but a wise person stays away from them.

Wild animals only come around people when they're used to getting handouts or have access to garbage. If they're just scouting around and find nothing, they leave.

Linda, you probably have critters where you live in California and may not have noticed them there. Some animals are able to adapt better around humans than others. You won't find lynx where you live as the boundaries for lynx only overlap a little into the northern states along the 49th parallel.