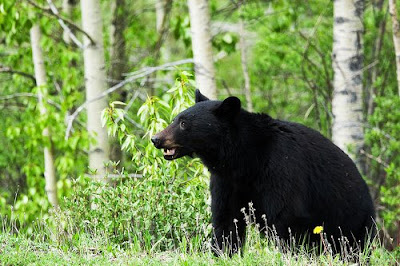 Where there are cubs mother is certainly nearby... 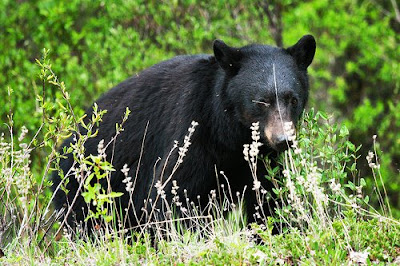 Although there have been issues with black bears, they are not on the endangered list.

The following apt description of black bears is from Wikipedia:

"The American Black Bear usually ranges in length from 150 to 180 cm (60 to 72 inches) and typically stands about 80 to 95 cm (34 to 48 inches) at the shoulder. Standing up on its hind feet, a black bear can be up to 7 feet tall. Males are 33% larger than females. Females weigh between 40 and 180 kg (90 and 400 pounds); males weigh between 115 and 275 kg (250 and 600 pounds). Adult black bears seldom exceed 300 kg (660 pounds) but exceptionally large males have been recorded from the wild at up to 240 cm (95 inches) long and at least 365 kg (800 pounds). The biggest American black bear ever recorded was a male from North Carolina that weighed 880 lbs (400 kilograms). Cubs usually weigh 200 to 450 g (between 7 ounces and 1 pound) at birth. The adult has small eyes, rounded ears, a long snout, a large body, and a short tail. It has an excellent sense of smell. Though they generally have shaggy black hair, the coat can vary in color from white through chocolate-brown, cinnamon-brown and blonde (found mostly west of the Mississippi River), to black in the east (the same is generally true in Canada, the border being between Manitoba and Ontario). They occasionally have a slight V-shaped white chest blaze. The tail is 4.8 inches long.

Although black bears can stand and walk on their hind legs it is more normal for them to walk on all fours. When they do stand, it is usually to get a better scent or to look at something. Their characteristic shuffling gait results from their plantigrade (flat-footed) walk, with the hind legs slightly longer than the forelegs. Another reason for the apparent shuffle is that they commonly walk with a pacing gait. Unlike many quadrupeds, the legs on one side move together instead of alternating, much like a Standardbred pacing horse. Each paw has five long, strong claws used for tearing, digging, and climbing. When necessary, they can run at speeds up to 30 miles per hour (48 kph) and are able swimmers.

Black bears are found in a wide variety of habitats across their range. They prefer forested and shrubby areas but they are also known to live on ridgetops, in tidelands, burned areas, riparian areas, agricultural fields and, sometimes, avalanche chutes. Black bears can be found from hardwood and conifer swamps to the rather dry sage and pinyon-juniper habitats in the western states. Black bears typically "hibernate" during winter in hollowed-out dens in tree cavities, under logs or rocks, in banks, caves, or culverts, and in shallow depressions. Dens are normally not reused from one year to the next. While they do not eat, drink, defecate, or urinate during hibernation, it is not the true hibernation of smaller mammals since their body temperature does not drop significantly and they remain somewhat alert and active. Females give birth and nurse their young while hibernating.

After emerging from their winter dens in spring, they seek carrion from winter-killed animals and new shoots of many plant species, especially wetland plants. In mountainous areas, they seek southerly slopes at lower elevations for forage and move to northerly and easterly slopes at higher elevations as summer progresses. Black bears use dense cover for hiding and thermal protection, as well as for bedding. They climb trees to escape danger and use forested areas and rivers as travel corridors."

These photos were taken beside the Icefields Parkway between Banff and Jasper in Alberta.

What great photo's! I hope you were using a zoom lens! Mama Black Bear's tend to get a little testy with the babies! That was awesome!

When I live in Steamboat Springs. CO I had a "love affair" with a Mama Black Bear (from behind closed doors!) that turned out to be a pretty funny story, maybe I'll post it one day...too long to leave in a comment!

Your posts are informative, amusing, and visually amazing...maybe when I become more computer literate...well, let's not hold our breath!

Not sure my comment posted. I know there are black bears in Arkansas and Louisiana but I've never seen one in the wild. Very cute cubs

They are adorable Barbara. I loved the shots. :D

Robin, the photographer (mot me) was getting out of his vehicle when his wife pointed out the mother bear who had approached the car (60 feet away), so he stayed in his car and took the photos.

Many years ago while visiting friends at a motel located near the Athabasca Falls I took a walk on a trail out back, only to discover a cute cub. At which point I made an immediate retreat not wanting to see mother bear.

And when I was very young, during our annual trips to the Rockies, most visitors "fed" bears from their vehicles. Usually cinnamon buns, which the bears really liked. One man had the windshield of his car knocked out by an irate bear who did not understand why the sweet buns had run out.

My parents always declined feeding bears, thank goodness. My father had hunted bears in the Peace River area of northern Alberta and knew their strength and agility.

Beautiful shots of the bears. I hope the photographer had a really powerful telephoto lens. :) It reminded me of a Gary Larsen 'Farside' cartoon, where two boys in one frame are poking at a bear cub with its Mother looking on. The next frame of the cartoon shows just the boys' clothes. :)

One of my favorite odd bear-facts: brown (grizzly) bears menace humans for territorial dominance, while black bears only bother people when they're hungry or threatened.

If attacked, one should play dead for a brown bear but fight hard against a black bear.

The catch? Both bears can be anything from honey-blonde to near-black. The only way to know what to do to save your life is to look for the brown bear's telltale hump.

Nothing strikes me as more ridiculous than being faced with an angry bear and trying to see if the darned thing has a hump! :)

Bernard, Steve: Yes, bears, whatever species they are, can be very dangerous. I watched a documentary on two grizzlies near Mt. Revelstoke behind a large chain link fence. I'm not certain if they were penned or not. One bear was passive, while the other liked to taunt the person who came to feed them. Like it was a great "bear" joke.

A mature brown bear often has grizzled hair tips that a black bear doesn't have. They're larger over all; and then there's the really BIG BEARS the Kodiak that live in Alaska and the Yukon.

Charisse D'hamers, of Antwerp, Belgium, was jogging on an abandoned mountain road about four kilometres south of Lake Louise when the bear came rushing out of the bush at her.

She backed up for 500 metres, yelling and trying to scare the bear away before deciding to lay down and play dead, Morrison said.

The bear repeatedly bit her before the woman jumped up, and continued to clap loudly and back up.

The animal continued to charge her for another kilometre before it finally lost interest.

David, I agree with the Canada Parks people: it is very unusual for a black bear to attack a human.

The article you provided was informative. My concern over this is that the woman worked at a ski resort and she knows about the wild animals in the forests. I wouldn't be running alone along a unused mountain road by myself. She was extremely lucky under the circumstances.

I've seen a few small black bears while fishing in New Mexico. They never fail to get my heart a pumping despite their small size and non-aggresive nature.

Travis, that's because you have an excellent survival instinct.

What awesome photos, and the facts about black bears were interesting, too. My husband and I are heading over to the US for a holiday in just over a week. My husband is very keen to see bears. We're actually going bear watching at Campbell River (a special tour), but that's for grizzly bears. I'm not sure if I should be nervous or not. We don't have scary animals in New Zealand.

What incredible creatures, and so powerful, I didn't realise they could pace, (natural), so that's now bears and camels.

That is a relatively good speed they can reach for such a cumbersome looking animal.

A similar error of judgement by folk up on Fraser Island, people started feeding and interacting with the native dingoes, sadly, it has led to deaths (of humans).

Just the sheer richness and wild terrain of parts of Canada is mindboggling...I love the feel and self image countries create and establish, the bear, (to me), has that image for Canada...perhaps like the kangaroo for Australia.

What incredible countries, (and how so vastly different), we live in. So very beautiful each in it's own unique way.

Shelley, welcome. Your tour guides will give you instructions as well as take good care of you. Grizzlies are more territorial than black bears, easily taking offence at intruders. I meant to do a post on grizzly bears later this summer, but will do it next since you will be coming to Canada.

Pam, your insights of human and wild animal interaction are apt. The nature films and those of Walt Disney give people a sense of familiarity to "fuzzy" animals instead of a healthy dose of respect. Bears, in particular, are predators and humans sometimes become prey if not careful.