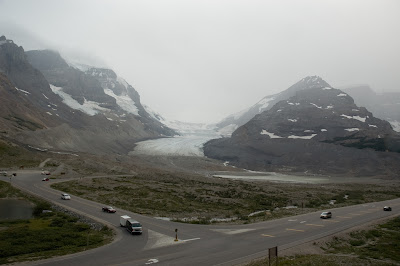 The Athabasca Glacier in this photo is a good distance from the main highway.

Dawn Walton wrote an article in The Globe and Mail, October 12, 2007 about the Icefields: “Ten tiny “the glacier was here” plaques mark the glacier's retreat. The first, dated 1843, sits in the parking lot at the Icefield Information Centre on the other side of Highway 93. The most recent, dated 1992, stands 200 metres from the toe.” 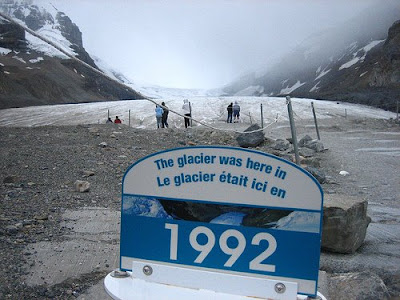 Three months later she took a friend up to the Columbia Icefields and to her shock she found the toe of the Athabasca Glacier had retreated 10 to 20 metres since her previous visit. 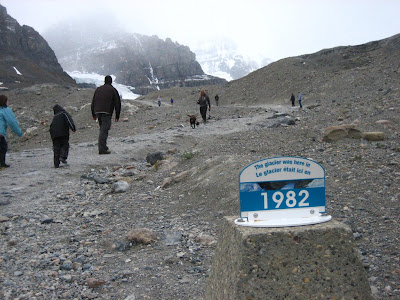 Wikipedia states: "The Columbia Icefield is an icefield located in the Canadian Rockies, astride the Continental Divide of North America. The icefield lies partly in the northwestern tip of Banff and the southern end of Jasper National Park. It is about 325 km² in area, 100 to 365 metres (328' to 1,197') in depth and receives up to seven metres (23 feet) of snowfall per year. The icefield feeds eight major glaciers, including: Athabasca Glacier, Castleguard Glacier, Columbia Glacier, Dome Glacier, Stutfield Glacier and Saskatchewan Glacier. Snow Dome is a mountain located on the Continental Divide in the Columbia Icefield of Japser National Park, Water from the The Dome Glacier flows to the north-east, the Stutfield Glacier to the north-west, the Columbia Glacier to the west and Athabasca Glacier flows to the east of the mountain.

The Athabasca Glacier is one of the six principal toes of the Columbia Icefield, located in the Canadian Rockies. Due to the warming climate, the glacier has receded more than 1.5 km in the past 125 years and lost over half of its volume. It currently recedes at a rate of 2-3 metres per year. The glacier moves down from the icefield at a rate of several centimetres per day. Due to its close proximity to the Icefields Parkway, between the Alberta towns of Banff and Jasper, and rather easy accessibility, it is the most visited glacier in North America. The leading edge of the glacier is within easy walking distance; however, travel onto the glacier is not recommended unless properly equipped. Hidden crevasses have led to the deaths of unprepared tourists."

The following photograph shows the type of all-terrain vehicle I rode in to go onto the glacier to accompany my mother in 1960. 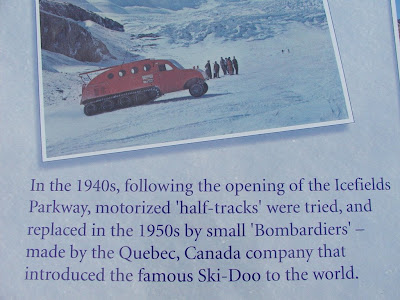 And forty odd years later an improved model is used to train upon the glacier. 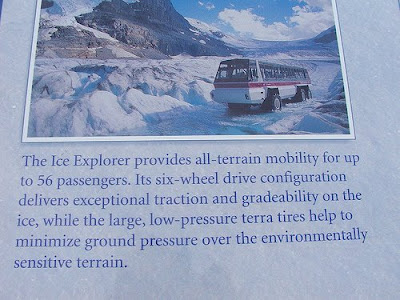 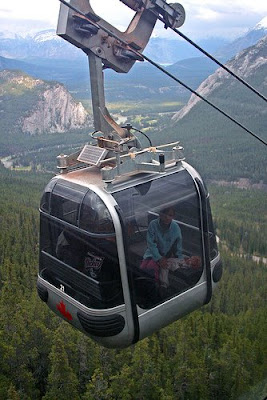 Near the Town of Banff are the Gondolas on the east side of Sulphur Mountain which take visitors to the top to the Tea House for a panoramic view of the surrounding valleys and mountains. Sulpher Mountain was named in 1916 for the series of hot sulphur springs: lower, middle and upper. 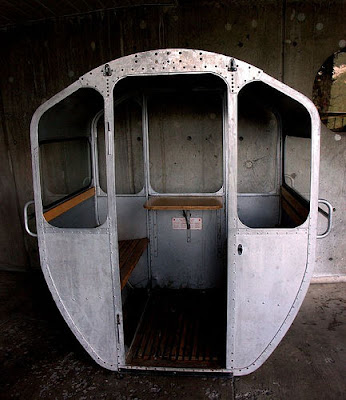 When I first rode the gondolas, these were the original models. They would swing when lifting out of the lower terminal and settle after less than a minute. They sat four people. If I went with any of my three older brothers, they took delight in frightening me by making it swing longer. This behaviour stopped quite rapidly after I got sick on one of them.

Over time, as long as the gondola didn't swing too much, I was able to enjoy future trips up and down Sulpher Mountain.

I always enjoy the beautiful pictures that you post -- yeah, and the articles too.....

Beautiful pics. I've never seen a glacier up close, of course. AS for your brothers rocking the gondola, I hope you threw up on them.

Bernard, I think my brothers tormented me when we were away from our parents because I was a sickly child and a hamper to their boisterous ways. Any unnecessary excitement produced relapses resulting in shortened summer vacations. Thus, I was the culprit, although I was jealous over their freedom in the mountains as they went exploring for the day. Its truly a wonder they weren't eaten by bears or cougars considering the places they went. Sometimes they were late for supper at the campground, arriving at dusk to eat cold leftovers and receive a scolding. For them it was worth the trouble.

Chris, the mountains have a big pull for me through those wonderous summer trips during childhood. We were fortunate we could spend up to a month in the summer. My mother had spent every August during her childhood in the mountains due to my grandfather's hayfever allergies.

Charles, you've never seen a glacier close up? Your comment inspires, and I left out the glacier mobiles in this one due to the space. Next post.