My Town Monday is the brainchild of Travis Erwin on traviserwin.blogspot.com where we write something about the location we live in. For interesting posts about other places visit Travis' blog.


Toronto is a Huron word meaning 'Meeting Place'. The first settlement in the entire Toronto area, was Teiaiagon, which was populated by the Seneca Indians and then later by the Mississauga Indians on the east bank of the Humber River.

The first European to stand on the shores of Lake Ontario in the vicinity of what is now Toronto was French explorer Etienne Brule. The location of Toronto was important for its series of trails and water routes that led from northern and western Canada to the Gulf of Mexico. Known as the "Toronto Passage", it followed the Humber River, as an important overland shortcut between Lake Ontario and the upper Great Lakes. Toronto became a hot spot for French fur traders and was under French control from 1615 to 1760.

Hostilities existed in Europe between Britain and France that were carried over into the colonial settlements and intense rivalries developed between the two as they vied for control of the fur trade and other resources. By September 1760 the British had defeated the French who withdrew from North America ending their rule, except for the islands St. Pierre and Miquelon at the mouth of the St. Lawrence River.

In 1792 British colonial officials founded the “Town of York” on what had been the Upper Canadian frontier.

The settlement of modern Toronto began in 1793 when Lieutenant Governor John Graves Simcoe (1752-1806) built a garrison on the present site of Fort York. Fearful of war with the United States, Simcoe planned to establish a naval base at York (Toronto) to control Lake Ontario. Simcoe also moved the Capital to Toronto from the exposed border town of Niagara. Civilian settlement followed and a community named York began to grow two kilometres east of the fort (York was renamed Toronto in 1834). 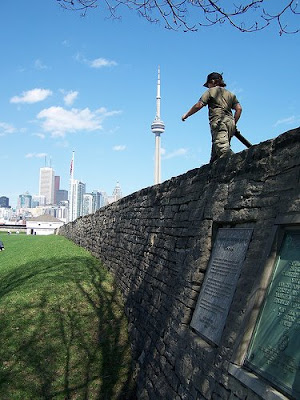 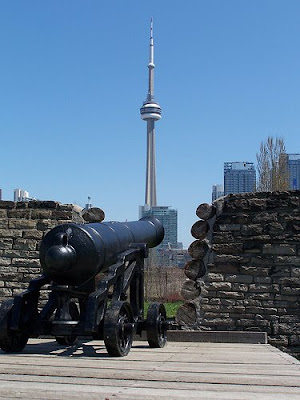 On June 18, 1812, James Madison, the President of the United States, signed a declaration of war against Great Britain due to an outgrowth of conflict by Britain who were blatantly disregarding the naval and trade rights of the United States. American citizens also believed that the British territory in North America was rightfully theirs and should have been taken during the Revolutionary War (1776-1783). 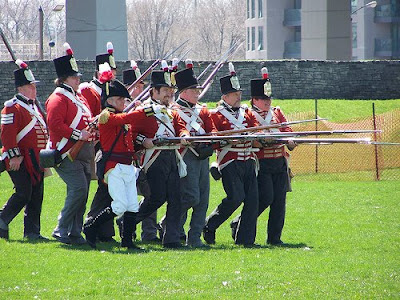 [4] In 1812, the United States declared war and invaded Canada. York was raided twice and on the morning of April 27, 1813, the Americans stormed ashore west of the fort under the cover of their naval guns. The defenders put up a strong fight, but the commanding British General, Roger Hale Sheaffe quickly realized the town was lost, and ordered his troops to retreat. On their way out, they rigged the gunpowder magazine at Fort York to explode; which it did, killing or wounding at least 100

soldiers on both sides, including American Brigadier General Zebulon Pike [photo 5]. The explosion was so powerful it could be heard in Niagara-on-the-Lake.

The Americans occupied York for six days. They looted homes, took or destroyed supplies, and burned the Parliament Buildings and Government House recently erected to house the government of Upper Canada. (On August 24, 1814 during the War of Bladensburg, the British retaliated and this will be dealt with in a later post.) 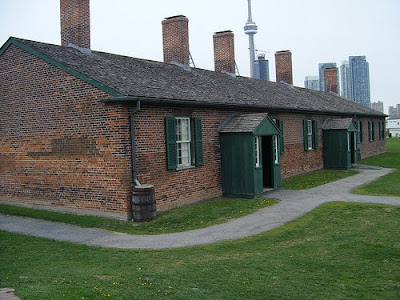 
Peace was signed in December 1814, although the news didn't reach York until February 1815. After the war of 1812, York felt the rising wave of British immigration to Upper Canada. Its hinterland trade mounted with expanding farm frontiers, as its merchants supplied country dealers as wholesalers, and it became the province's banking centre.

The British army continued to garrison Fort York after the war, although most of the troops moved to new barracks one kilometre west of the fort in 1841. During times of peace, Fort York's defences were allowed to deteriorate, only to be strengthened at times of tension, such as the Rebellion Crisis of 1837-41, or when war with the United States seemed imminent, such as in 1861-62. 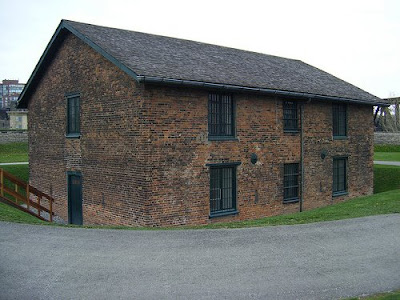 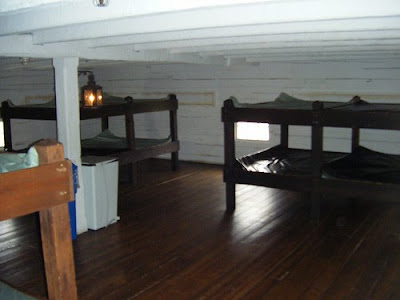 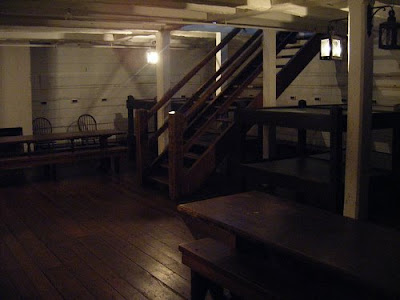 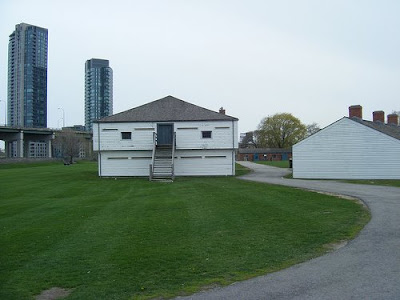 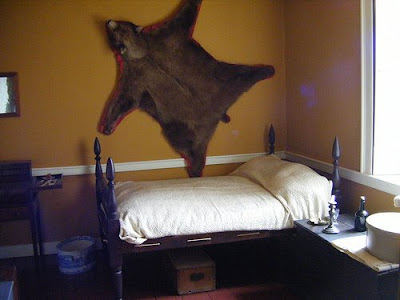 all of which represent the British army's architecture as employed on the Canadian frontier in the Georgian era. Some buildings present restored interiors to reflect the lives of the garrison community, such as the graceful Officers' Brick Barracks and Mess Establishment of 1815.

Others, like Blockhouse Number Two from 1813, the house museum exhibits that explore fascinating themes in Canadian military history. [11] Fort York’s cannon and earth-works became obsolete in the 1880s, although the army continued to use the fort for training, barracks, offices and storage until the 1930s. Fort York opened as a historic site museum in 1934.

By 1834 Toronto’s population rose to over 9,000 and was incorporated as the City of Toronto, with an elected civic government led by William Lyon Mackenzie as first mayor. Toronto flourished. In the 1840s Toronto increased its commercial activities: steamboat ports, gaslit and sewered main streets. The 1850s brought a web of railway tracks to connect it to New York, Montreal, the upper lakes at Georgian Bay and across western Upper Canada to Detroit and Chicago. As well, Toronto was a hub of extended wholesalers, banking and railway entrepreneurs. In 1867 Toronto was made capital of the new province of Ontario at Confederation, and by the 1870s was becoming heavily industrialized.

I'd like to take a tour here sometime. Sounds like a very neat place. Thanks for the virtual tour.

That's exactly what I wanted to do once I finished my post. In the summer there are historical re-enactments which would be interesting to watch.

The Fort is at the original shoreline of Lake Ontario. South of there now is reclaimed land and highrise condos.

Also, there are reports of paranormal activity on the grounds near the barracks and the cannons where visitors have heard voices and seen faint images of soldiers. I'm sensitive that way and would probably experience it.

I'd never heard of the Toronto Passage. I love these posts! I learn so much---and the vitual tours are the next best thing to being there. thanks for another interesting post, Barbara.

We have Fort Wayne outside Detroit. And several others across the state.

Fabulous post! I am such an American history buff! It was great to get all these detais from a Canadian perspective.

I can't wait for the follow-up.

Debra, glad to hear you liked it.

Pattinase, here's your chance to write about their histories. I, for one, would like to know about them.

Terrie, thanks. There are quite a few incidents and battles during the War of 1812 which will certainly fill this summer with posts of history. Then there's the Rebellion of 1837 in which my great-great grandfather played a role.

Great post - loved the photos - especially the hearth one - love that fireplace!

Sam, it would be interesting to learn how to cook meals the way they did in 1812 using similar implements.

It is incredible so many of the structures remain intact. The Fort York building looks as if it might have been built fifty years ago rather than nearly two hundred.

i lived quite some time in the west end [roncesvales area] then on to 'scarberia', and finally to alberta and further west

thx for the reminiscences

Great history lesson here. I'm a bit ashamed to say I knew very little of that history until now.

Wow, that was cool! Thanks.

Bernard, the cities of Montreal and Quebec City have buildings that date back over 200 years. I'll be posting about the Plains of Abraham at a later date.

Travis, there were many skirmishes and battles in early Canada and the United States, which in themselves is quite difficult to be able to keep track of all of them.

Steve, your comment will provide me incentive to write more history.

This is great Barbara. I love the idea of "my town monday." And yourse is absolutely fascinating. You know, at one time, our town had two historic cannons. The other day, I was at a local park and one of them was gone. I suppose I missed some debate in the newspaper over it, but never-the-less, it's gone. Sad that I never thought to take a photo of it. I DO however have one of a cannon in a park close by. Maybe I'll write about that. Thanks for the cyber-tour! ~Karen

Karen, welcome and thanks for visiting. I like the My Town Monday posts which anyone can join. Everyone who participates always has something interesting to say about the place they live in or a location nearby.

I write about historical locations and buildings because its something I'm very keen on. All the original immigrants from overseas who came to either Canada, the United States or Mexico had an important place in each country's history. By remembering these people, the places they settled and the disagreements over land ownership is part and parcel of who each of us are.