The Road to Bedlam by Mike Shevdon (Book Review) 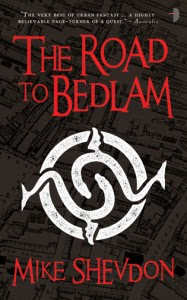 “There’s been an accident. It’s your daughter.” These are the words no parent ever wants to hear.

“Learning to cope with the loss of a child is only the beginning of the new challenges facing Niall Petersen. An old enemy has returned and Niall already knows it’s not a social call. As the new Warder of the Seven Courts he will be forced to choose between love and honour, duty and responsibility.”

This is the second book in Mike Shevdon’s The Court of Feyre series which follows SIXTY-ONE NAILS, when Niall Petersen discovered via a heart attack on the London underground that he had inherited ‘fey powers’,. This introduced Niall into the hidden world of magic and the Courts of Feyre, of which the Untainted are the darkest of the Seven Courts.

Following on the heels of SIXTY-ONE NAILS, Niall Petersen becomes a new Warder with the responsibility of protecting the High Council of the Seven Fayre Courts, and cleaning up after individual Fayre who go beyond their bounds.

Alex, Niall’s daughter, is involved in a terrible school mishap when her fey powers go out of control. Thinking her dead, Niall grieves; yet, through an unexpected communication through a bathroom mirror he learns that Alex is still alive.

Complicating matters are the return of Lord Altar, and two guests, Raffmir and Deefnir, wraithkins of the Seventh Court. Being the Untainted, they have a determined agenda to rid the world of all part human-part fey ‘mongrels’. To alleviate tensions Garvin, the Head Warder, sends Niall on a special assignment acting as a journalist to investigate missing girls in a northern seaside location in England. While there Niall, whose paternal cares threaten to overwhelm him as he struggles to maintain his Warder training against searching for his missing daughter.

Blackbird, who had rescued Niall in the underground in the first book, returns as his new partner. She is heavily pregnant with their first child who will be part fey/human. Aware of her vulnerability during pregnancy, with no magical powers, she assists Niall where she can.

Raffmir is a magnificent antagonist and despite his charming mannerisms is utterly ruthless. He lures Niall into assisting him in rescuing Alex from her confinement. Rather than to go into too much spoiler detail, their activities in the lead-up to the ending is superb, racheting up the suspense.

The pacing and attention to detail are spot on, with assorted exciting incidents within that are certain to please the reader. A few such scenarios were: Niall’s encounter during a dream-state of carnivorous plants in a forested glade; and discovering a vicar had inherited ‘power’. All sub-plot threads were tied up at the end except for a few that will obviously be dealt with in the following books of the series.

Mr. Shevdon’s expertise in martial arts rings through with the sets of swordplay and developing the concept of other realms in the void beyond our known existence. Books 3 and 4 of the series are being published by Angry Robot Books, of which I look forward to reading.

The review copy was provided by Lee Harris, with many thanks.

“The creator of a child-swallowing manta ray struggles with office politics: a parasitical collective of co-workers, his (literally) flammable supervisor, and the hazardous whims of the fiftieth floor. A broken-hearted sharpshooter travels to a dusty border town, searching for the elusive floating city where her husband has vanished. A dissolute author – equipped only with two pearl-handled pistols, a rockhopper penguin, and plentiful vodka—is dispatched to Lake Baikal, where he hunts for his metafictional redemption.

“The Third Bear is the much–anticipated first collection of critically-accalimed author Jeff VanderMeer’s surreal and absurdist short fiction. VanderMeer, whose work has been compared by critics to Borges and Kafka, evokes exotic beasts and eccentric scenarios from the uncharted depths of our innermost psyches."

Tthese are stories about the inexplicable, and the reader ought to consider the imagery within each of the stories. Mr. VanderMeer's early exposure to the sea play upon several of the stories: to read those of a sea-faring nature brings the reader right into the story itself. There are many hidden things within the lines of each story. The genre elements of horror are mingled with fantasy and every day realism. Many of the stories have disturbing elements to them.

A forest village is plagued by brutal killings by a bear. Despite repeated attempts to send hunters, the villagers turn for assistance to the witch in the woods. An intriguing aspect of this story was the door to the witch’s abode.

An orphan living with her Aunt in Florida acquires a white rabbit: who talks. An engaging story of growing up.

A stamp collector hires a PI to find the place “Sonoria” from the name on the stamp. After an unfruitful search, the PI begins thinking he can see the trees moving in the wind on the mountain. Then his dreams begin.

A man slips into another reality after the death of his wife.

Warped victimization of working in a futuristic office where the office manager is flammable.

Utterly creepy story of a scientist in an old mansion with bizarre experiments.

A piece of machinery is washed up on shore which a man names Hanover when he is asked to repair it. An alarming incident occurs when Hanover speaks.

Shark God versus Octopus God
(based on a Fijian myth)

The Shark God, Dakuwaga, rules his portion of the sea by relentless blood lust with his army of 10,000 sharks, considered invincible. One day, Dakuwaga decides to battle the Octopus God for Kadavu Island, learning the aspect of mercy from a powerful opponent. An excellent story.

The first two sentences in this short set up the reader nicely:”I am writing this sitting in the waterlogged lobby of a rotting, half-finished condominium complex. I am surrounded by cavorting freshwater seals and have two pearl-handled revolvers in my lap, a bottle of vodka in my right hand, ahuman body in the freezer in the kitchen behind me, and a rather large displaced rockhopper penguin staring me in the face.” By the way, the penguin’s name is Juliette. Thus begins a tongue-in-cheek mission to change the future. Good fun.

A future America where the separatist evangelists have divided the country with the government fighting them. Deep beneath the Pentagon REM-stage images have been collected from segregated adepts: a collective message of a future event. A time machine is built to convey users to alternate realities.

Three Days in a Border Town

The descriptive images of desert sand and ancient buildings provide an intriguing backdrop for a woman-looking for her missing husband. In each of the border towns she discovers another clue about the illusive City in the desert.

The Secret Life of Shane Hamill

A humourous look at a bookstore employee who builds a Roman galley. There’s a nice twist at the end.

This story is a variation of the Frankenstein theme.

(Fragments from the legendary city of Smaragdune’s Green Tablets)
Short stories within a larger one with vivid imagery in the prose along with bits of some of the previous stories in thus anthology.


Despite the sinister undertones in the majority of these stories there is something here for every fantasy reader.

Jeff VanderMeer is the award-winning author of City of Saints and Madmen, Finch, and Veniss Underground. He has recevied two World Fantasy Awards and an NEA-funded fellowship.


The review copy was provided by Matt at Tachyon Publications.