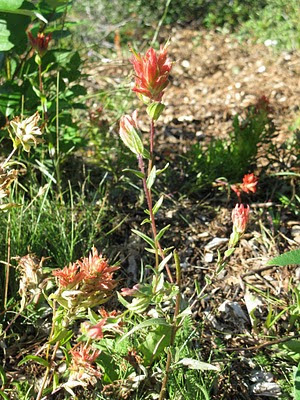 [1- Indian Paintbrush near the Icefields Parkway - click to enlarge]

To reach the trailhead take the Icefields Parkway Hwy 93 to the Wilcox Creek Campground on the east side of the highway 2.8km (1.7mi) south of the Icefields Centre or 1.9km (1.2mi) north of the Banff-Jasper boundary at Sunwapta Pass.

This hike is considered one of the best day hikes in Jasper National Park. 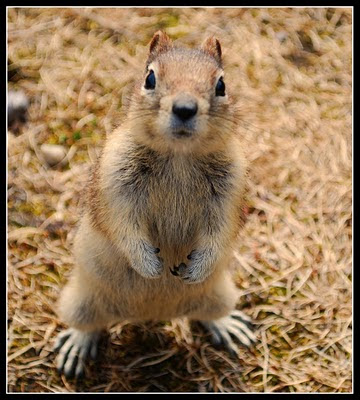 These little guys seem to populate the wood piles near campgrounds wherever one travels in the mountains.

The Wilcox Campground road is at an elevation of 2040m with a steep climb through alpine forest.

At approximately the 1.7km mark the trail emerges above the treeline gaining 120m in less than a kilometre.

In another 2.5km there is a steep climb to flat alpine meadows and the viewpoint for the Athabasca Glacier. 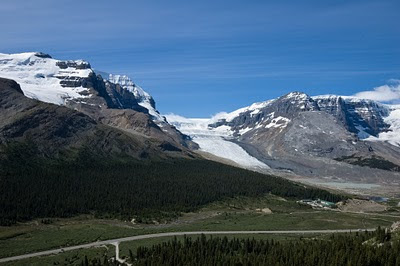 [3- Viewpoint of Columbia Icefield, Mt. Athabasca to left with Mt. Andromeda behind, the Athabasca Glacier in the middle and Mt. Kitchener and the Snow Dome on the right - from the Wilcox Pass Trail - click to enlarge]


Only a small portion of the Columbia Icefield is visible from the Icefield Parkway. The Athabasca Glacier is the most accessible and visible of the glaciers which flow from the Icefield, but there are numerous others. Over three hundred square kilometres in area, the depth of the icefield varies from 100 to 365 metres. The average annual snowfall on the upper reaches is seven metres.

Mt Kitchener was named in 1916 after Horatio Herbert Kitchener (Viscount Kitchener), a British Field Marshall who organized the British armies at the beginning of WWI. He was lost when HMS Hampshire struck a mine in 1916. 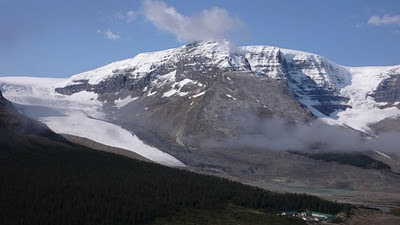 [4 - Snow Dome and Mt. Kitchener from the Wilcox Pass trail - click to enlarge] 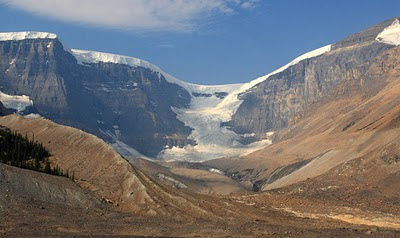 The Snow Dome was named in 1898 by J. Norman Collie . This dome-shaped mountain is covered by the Columbia Icefield. The water produced from this mountain flows into three oceans through the Saskatchewan and Nelson rivers to the Atlantic, though the Columbia to the Pacific, and through the Athabasca and Mackenzie Rivers to the Arctic. 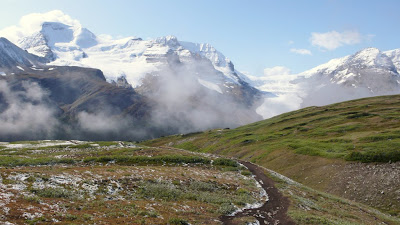 [6 - View from Wilcox Pass trail toward Mt. Andromeda, the Athabasca Glacier and Mt. Kitchener on right - click to enlarge]


Past the viewpoint the trail climbs along the edge of a creek, then levels out across alpine tundra and heads northwest into the long U-shaped pass between Wilcox and Nigel peaks. 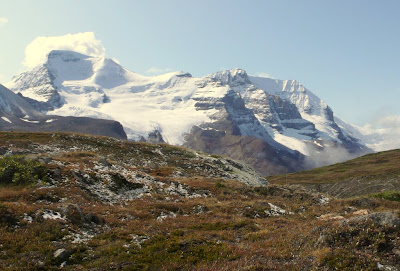 [7 - Looking back to Mt. Athabasca and Mt. Andromeda from the Wilcox Pass Trail - click to enlarge]


Here the wildflowers grow close to the ground. 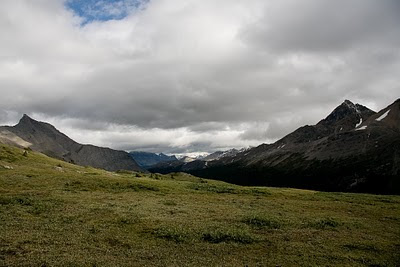 [8 - Wilcox Pass trail - click to enlarge - Mt. Wilcox is above horizon of hill on left side]

At 4.0km is the summit of Wilcox Pass (2374m). Wilcox Pass and peak are named after Walter Wilcox, whose party first crossed the pass in 1896 on horseback. The pass became the usual route north as it avoided the Sunwapta Gorge and the Athabasca Glacier, which nearly blocked the valley below. 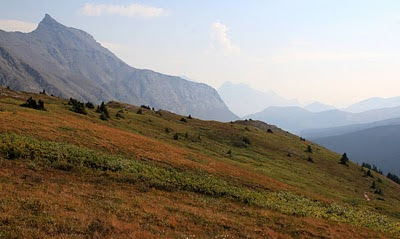 
It is here and at the other end of the pass that the hiker will find Bighorn Sheep. 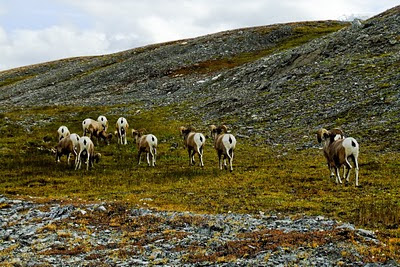 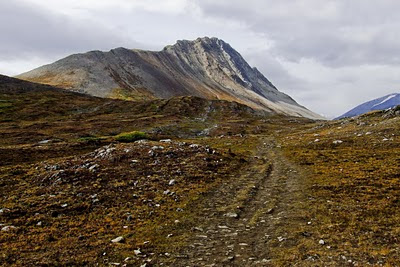 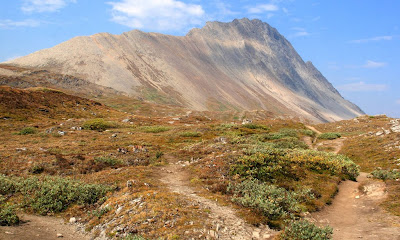 [13 - NW on Wilcox Pass trail with Mt. Wilcox in background - click to enlarge] 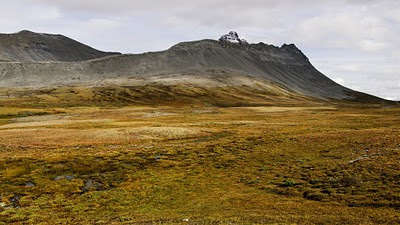 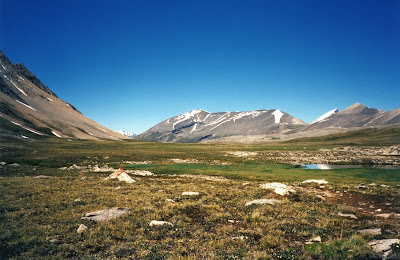 To continue on to Tangle Falls the route continues north across the pass to trail makers or cairns at the 7.1km mark, where there is a steep descent into the forest. Stick to the left side below Mount Wilcox. At about 8.6km, the trail crosses to the left of the creek where it becomes more defined. Here the slope goes from moderate to steep on the descent south of Tangle Creek.

Otherwise, at the rock cairn the hiker can begin to backtrack the way they came to return to the Wilcox Creek Campground. 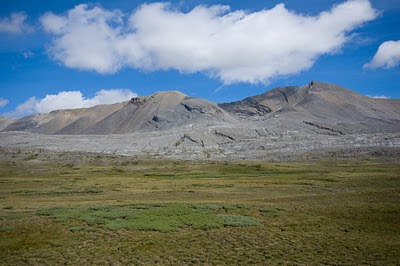 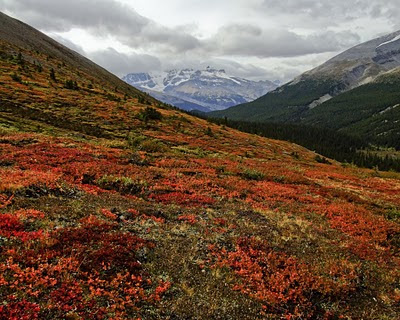 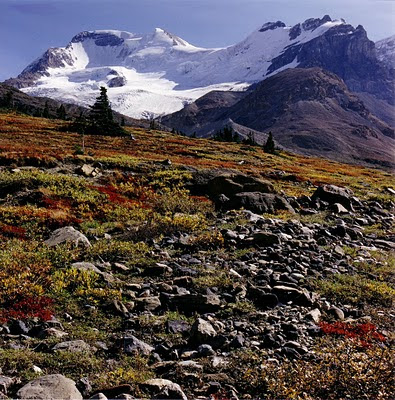 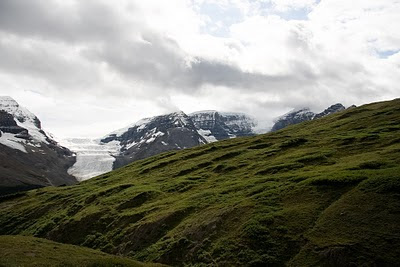 [19 - On Wilcox Pass Trail looking toward the Athabasca Glacier] 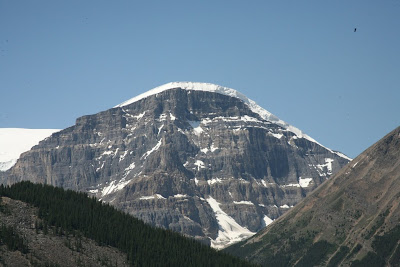 [20 -Mt. Kitchener beneath the Snow Dome]

What a wonderful trail.

I love the little squirrel. It's so cute!

Ah to live in a country with mountains! That's What I call a previlege! I love mountains, so thank you for your photos!

With all the pics that Lana would have to take, that day hike would be at least a 2 dayer.

What a great post, just wish it was a bit nearer! I'm in England, but that's the sort of hike I would love. All looks very special. I'll no doubt get to Canada one day.

Leah, this is a trail that isn't complicated, just steep in places. Though one does have to watch out for bears due to the bighorn sheep in the pass.

Lauren, these squirrels become very climatized to humans quickly just for that reason of being so 'cute'.

Wil, what's lovely is there are the Rocky Mountains on the western end of the country and the Laurentians in the east.

Charles, a big draw would be all the different kinds of wildflowers that grow quickly in July. Everywhere one turns there is a fantastic view waiting to be photographed.

Mike Perry, welcome and stay awhile. There are many posts on different trails here to choose from. Sometimes virtual touring is the best way to get a taste of what might lay in wait on such a hike.

The snow-covered mountains were spectacular, and the chipmunk was just adorable.

Stunning photos Barbara. What a beautiful and majestic part of the world.

Kia ora Barbara,
It is the immense size of the country there that always makes me gasp. I love this tramp for the gradual( and no doubt grueling) climb from the lower forest to the high country and the stunning change of views and plant life. Now how can you not enjoy that?
Kia kaha.
Aroha,
Robb

Teresa, mountains and cute squirrels are one of my specialities.

Pam, just trying to lure you up here.

Robb, this is a well hiked trail that ParksCanada is trying to keep people on the paths to avoid damaging the plant life.

The Icefield Parkway is 230 km (143 miles) long: an excellent experience to drive upon to see the more rugged area of the Canadian Rockies.

One of these days you must come to have a tramp, even if it is of short duration.

I've spent so very little time in my life near mountains. Looking at these photos this morning, that fact makes me so sad!

the glacier pictures are incredible!

I'm with Lauren on this- all the pictures are great, but I love that little squirrel!

Richard, mountains seem to speak to me more loudly than do the prairies or the rugged coast in parts of Nova Scotia and Quebec.

The photos of the mist evaporating in mid-morning remind me of those chilly mornings when camping as a child with parents, and wondering who took the mountains away.

Perhaps you can take a trip and go to see them close at hand, or you can always visit here. I yearn for mountains, and find the photos and posts calm that ache for a time.

Barrie, snow and ice on mountains are a great draw, and provide a nice chill to the air when the wind blows over them.

Rick, squirrels are rather cute and appealing.

Such a vast landscape.The photos display well the immensity of it all.

What a beautiful landscape in the summer! I've been in the winter with my Yaktrax before, but it's amazing how much different the location looks with some sun!