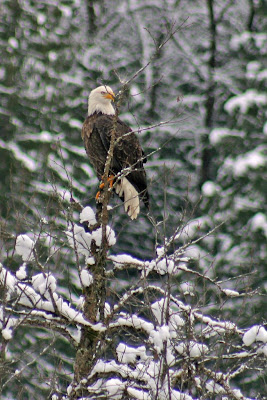 Bald eagles have a wing span of 80 inches with a body length of about 31 inches. This bird prefers open or wooded areas close to water. They tend to mate for life, raising 1 to 3 chicks in an eyrie 150 feet off the ground in a tree. Some nests weigh up to 1,000 pounds.

In the culture of the First Nations, including the Haida on the west coast in British Columbia, the eagle is revered as a bird of power and strength. The eagle also represents strength, courage, honesty, truth, majesty, wisdom and freedom. The traditional legends believe the eagle is a messenger of God, carrying prayers from men of the earth. It is a great privilege to receive an eagle feather, representing gratitude, love and respect.

The Haida have lineages under either "eagles" or "ravens" and use these birds as crests on their totem poles. The animals beneath them belong to the lineage of the family.

Unfortunately, these birds remain on the endangered species list despite a remarkable comeback.


“When Shai is caught replacing the Moon Scepter with her nearly flawless forgery, she must bargain for her life. An assassin has left the Emperor Ashravan without consciousness, a circumstance concealed only by the death of his wife. If the emperor does not emerge after his hundred-day mourning period, the rule of theHeritage Faction will be forfeit and the empire will fall into chaos.

“Shai is given an impossible task: to create—to Forge—a new soul for the emperor in fewer than one hundred days. Buther soul-Forgery is considered an abomination by her captors. She is confined to a tiny, dirty chamber, guarded by a man who hates her, spied upon by politicians, and trapped behind a door sealed in her own blood. Shai’s only possible ally is the emperor’s most loyal councilor, Gaotona, who struggles to understand her true talent.

“Time is running out for Shai. Forging, while deducing the motivations of her captors, she needs a perfect plan to escape…”


This fantasy novella is my first foray into Brandon Sanderson’s work, and I’m pleased to say the read was a total pleasure. The story immersed me into well detailed Chinese lore set in a fantasy world containing magic. Woven throughout are fantastic descriptions of background, characters with their inter-personal relationships and motivations, culminating into an intriguing story with a perfect ending.

This is a not to be missed book, and with its convenient size the perfect stocking stuffer for the upcoming festive season.


Brandon Sanderson is the bestselling author of Elantris, the Mistborn Trilogy, and The Way of Kings. In 2007, he was chosen to finish Robert Jordan’s epic Wheel of Time series, The Gathering Storm and Towers of Midnight were #1 New York Times bestsellers; the final volume, A Memory of Light, is a highly anticipated January 2013 release. Sanderson received his Master’s degree in creative writing from Brigham Young University, where he currently teaches. He is a co-host of the Hugo Award-nominated weekly podcast Writing Excuses. Sanderson lives in Utah.


The review copy was provided by Charlene Brusso, with many thanks.