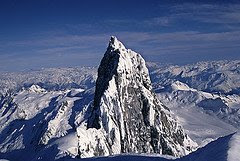 [1] Mount Waddington, once known as Mystery Mountain, is the highest peak in the Coast Mountains of British Columbia, Canada at 4,019 metres (13,186 ft). Although Mount Fairweather and Mount Quincy Adams, which straddle the US border between Alaska and British Columbia are taller, Mount Waddington is the highest that lies entirely within British Columbia. It and the subrange which surround it, known as the Waddington Range, stand at the heart of the Pacific Ranges, which is to say it is in a remote and extremely difficult set of mountains and stupendous river valleys. 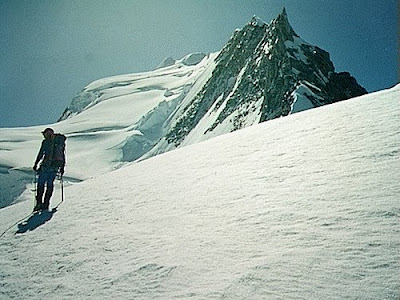 It is not so far north as its extreme Arctic-like conditions might indicate and Mount Waddington and its attendant peaks pose some of the most serious expedition mountaineering to be had in North America — and some of the most extreme relief and spectacular mountain scenery. 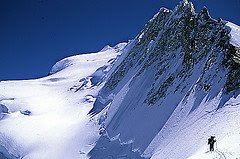 From Waddington's 13,000'-plus fang to sea level at the heads of Bute and Knight Inlets is only a few miles; 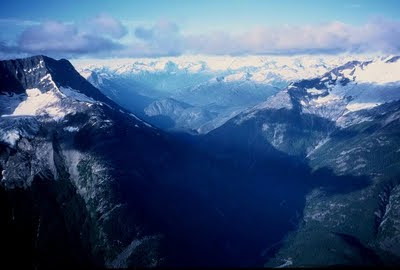 across the 10,000 foot deep gorges of the Homathko and the Klinaklini Rivers stand mountains almost as high, and icefields even vaster and whiter, only a few aerial miles away, with a maw deeper than the Grand Canyon, comparable in relief to the Himalaya (to which the terrain of British Columbia was compared by colonial-era travellers). 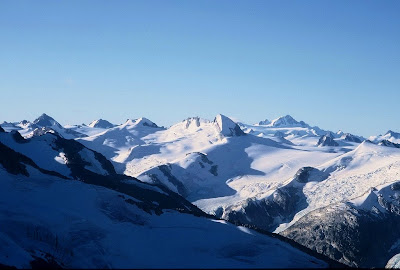 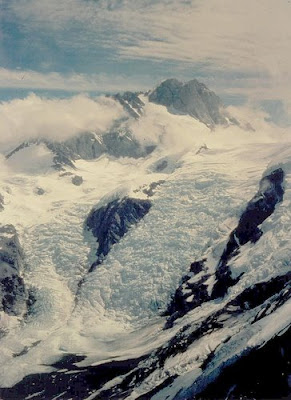 In 1925, while on a trip to Mount Arrowsmith, Vancouver Island, Don and Phyllis Munday spotted what they believed to be a peak taller than Mount Robson, the then accepted tallest peak entirely within British Columbia. In the words of Don Munday "The compass showed the alluring peak stood along a line passing a little east of Bute Inlet and perhaps 150 miles away, where blank spaces on the map left ample room for many nameless mountains." This led the Mundays to explore that area.

Over the next decade, the Mundays mounted several expeditions into the area in an attempt to climb it. Known to them as "The Mystery Mountain", in 1927 the height was measured at 13,260 feet (by triangulation); they reached the lower summit in 1928, deeming the main summit too risky. On their recommendation the Canadian Geographic Board gave it the name Mount Waddington after Alfred Waddington who was a proponent of a road route, known as Waddington’s Road, and again later the same for a railway, via the Homathko River valley and Bute Inlet, which would connect to Vancouver Island via Seymour Narrows.

Mount Waddington takes in the seaward slope of the Waddington Range and the adjoining coastline and parts of northern Vancouver Island adjacent to Queen Charlotte Strait.

Again, just gorgeous, and you want to find your boots and parka and head up!
Barbara--if you have a moment, and the inclination, visit us at pottersblog and submit a joke. You could win!

Beautiful pictures. It's nice to read about people with enough common sense not to commit suicide attaining a fleeting moment of triumph.

JUST STUNNING, had to shout that.

Beautiful scenery, I've got to visit BC one of these days. (Beyond Vancouver and Victoria, that is.)

Gary, on a good day I might be able to make it to only the treeline. I'd like to take one of those helicopter package trips to Mt. Assiniboine in Alberta and do some low level hiking there.

I noticed I was too late for the joke contest, even though I posted it late. Using the computer at work is a big NO NO.

Bonjour, François, your English is better than my Francais. Welcome, and since you are a big fan of mountains and glaciers, as I am, I will be doing a regular post on Thursdays of hiking trips in a variety of places. There will be a few long hikes which are continued on the following weeks. My history posts are often like that.

Bernard, I agree with you. To think there are dozens who tried to climb Mt. Everest, died and were left there. Often new climbers see and pass these awful reminders of what can happen when you make a misjudgment.

Tony, I was unaware of them too until I happened to come across them while researching glaciers.

Brian, my sentiments are the same.

Linda, there are package tours to take when visiting BC including a boat that travels up the coast. Of course there is always that alluring Alaska Cruise that calls.

These make me want to strap on my downhill skis. Beautiful, Barbara :)

L.A., I like to post mountains and glaciers after a particularly stress filled day at work. My concerns disappear whenever I see these, or similar photos.

I've GOT to climb that!

Nathan, welcome and good luck on your attempt.

Thanks for the great writing and photos. I am a Yank, but super fan of BC rivers and summits. I hope to see this peak in person some day and plan to climb Taseko, a beauty also.

Bob K, welcome. It's always nice to hear from another mountaineer.