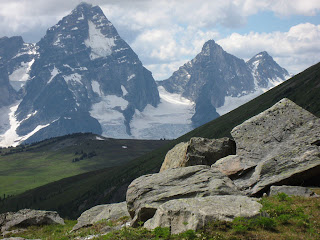 This is a view of Mount Sir Donald taken from the Abbott Ridge Trail in Glacier National Park, B.C. This hike will be posted soon for those enthusiasts of craggy heights. 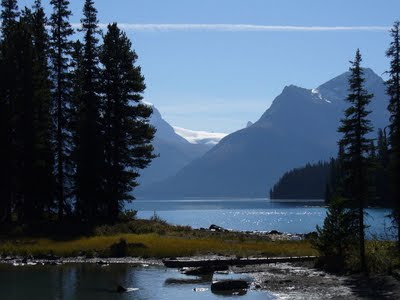 Once again, Blogger has decided to play games on whether I am allowed to upload photos for a hiking post on a trail in Glacier National Park in British Columbia.

However, this photo of Spirit Island at Maligne Lake in Jasper National Park, Alberta will suffice for the time being.

"Welcome to the unpredictable world of urban fantasy. In these twenty complex and highly entertaining tales, you'll encounter unforgettable characters in thrilling scenarios: the overwhelmed innkeeper in the haunted house of her dreams, the unicorn miraculously freed from imprisonment in a tapestry, a misfit who gives the class bullies the ride of a lifetime..."


This anthology contains three sections of urban fantasy covering distinct subgenres. Each of the stories delves into relationships between well rounded characters. My favourtie stories were: A Bird That Whistles, Julie’s Unicorn, Companions to the Moon, Gestella and Talking Back to the Moon. The Introduction by Peter S. Beagle provides an eloquent and delightful explanation of how urban fantasy began and how it has evolved.

Mr. de Lint provides background and insight on the development of mythic fiction—myths and folklore.

A Bird That Whistles
By Emma Bull

This engrossing tale set in 1970 features a young musician who encounters love, magic and an elf.

Maida, a shape-shifting crow, plays detective to help a ghost pass over.

The Goldfish Pond and Other Stories
By Neil Gaiman

On the Road to New Egypt
By Jeffrey Ford

A man driving home from work picks up two hitchhikers: Christ and the Devil.

Mr. Beagle’s stories are pure enchantment for me, leading immediately into the story and keeping the reader there. A delightful, magical tale of freeing a unicorn from a tapestry.

Introduction: A Funny Thing Happened on the Way to Urban Fantasy
By Paula Guran

An in-depth look at the evolution of urban fantasy and its subgenres—how writers work influences public demand.

Companions to the Moon
By Charles de Lint

Suspicions arouse, a woman follows her partner to a meeting of the Fayre Court.

A Haunted House of Her Own
By Kelley Armstrong

Be careful of what you ask for. Tanya has the Victorian house of her dreams, complete with a history.

She’s My Witch
By Norman Partridge

Raising the dead isn’t for the faint of heart.

A brilliant piece on the evils of binding a person to you out of love.

Entertaining story of a werewolf locating his missing brother—and love.

This story of an angel hiring a hitman didn’t work for me.

Puberty has its problems: body changes, hormones and teasing. Kelsey, however, has an ace when the moon turns full.

Grief overcomes a woman whose child has died.

Introduction: We Are Not a Club, but We Sometimes Share a Room
By Joe R. Lansdale

Two sentences in his introduction paraphrase the wonder of this anthology:

“These stories are all trips into a world of strange magic, places where you have not been. Once you come back from your journey, you’re unlikely to forget this voyage any time soon.”

An enterprising young woman learns about vampires and how to dispatch them.

A werewolf’s lot isn’t easy--. This is a story you won’t forget.

The Coldest Girl in Coldtown
By Holly Black

Vampirism is an infection sweeping throughout America. Matilda’s got 31 days left from 88 to kick the vampire habit, providing she doesn’t drink any blood.

Talking Back to the Moon
By Steven R. Boyett

On the Far Side of the Cadillac Desert with Dead Folks
By Joe R. Lansdale

A weird zombie-bounty hunter story that others may find to be their cup of tea.

The Bible Repairman By Tim Powers

Before Torrez began editing bibles for sinners, he assisted families with ransom requests for stolen ash urns and the safe return of the ghost of their departed love ones.

Raised in a disillusioned upbringing, a man sets out to correct it.


Review copy provided by Charlene Brusso with many thanks.