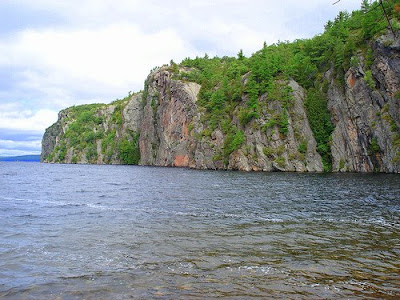 [1] This great park is half way between Kingston and Ottawa, Ontario.

Long a favourite destination for painters and photographers, this park north of Napanee is renowned for Mazinaw Rock. This 1.5-kilometre sheer rock face rises 100 metres above Mazinaw Lake, one of the deepest lakes in Ontario, and features over 260 native pictographs – the largest visible collection in Canada. 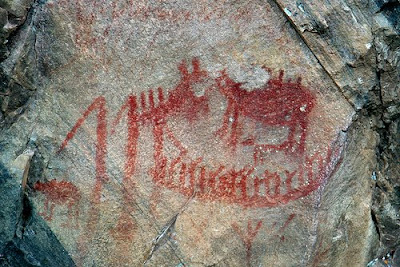 
The Nanabush, also known as the Trickster, who is half spirit and half human. He is creator and spoiler, hero and clown, capable of noble deeds and gross self-indulgence. He is unpredictable, one minute inspiring awe for his creativity, the next moment provoking laughter at his foolishness.

Most of the pictographs on Mazinaw (which means "painted") rock represent a result of a vision quest, ceremony or acknowledgments of spiritual assistance. As no native groups have claimed these paintings, it has been difficult to determine their meanings. 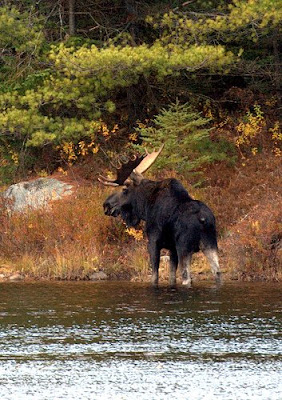 [3] Due to its location, Bon Echo offers a unique chance to see species typical of both northern and southern Ontario, such as deer, moose (photo), black bear, red fox and beaver.


Sources: greatcanadianrivers.com, ontarioparks.com
**Nanabush and the Rabbit as described by Dan King.

This makes me want to go fishing so badly.

Charles, I suppose I should actually do a post about fishing, rather than spouting off about pictographs and Objwe legends.

The pictographs make me wonder about a concoction of paint able to last over the centuries.

Beautiful photos, Barbara. I loved the tale about the rabbit. :)

Bernard, these paintings are considered to be no more than 600 years old. This makes me think about the prehistoric cave paintings found in Europe which are from 13,000 B.C. or older. I found this interesting site which may be of interest to you or others: http://www.donsmaps.com/cavepaintings.html

Shelley, many of the First Nations people are beginning to tell their cultural tales of how the world began, and how the Rabbit got its long ears and hind feet is only the tip of the iceberg.

The pictographs are awesome.

Travis, I considered they might have been painted when the water levels were lower, but we will never know for certain.