In a recent move to protect Sturgeon in Ontario’s lakes and waterways, the Provincial Government is restricting the harvest in both recreational and commercial fisheries. As of July 1, 2008, recreational anglers will no longer be allowed to keep any lake sturgeon they catch. The traditional use of lake sturgeon by Aboriginal peoples for subsistence and ceremonial purposes will not be affected. The Ministry will work with them to ensure the lake sturgeon populations can be managed sustainably. 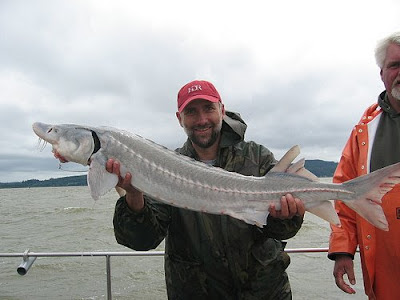 The Ontario Ministry of Natural Resources has shown evidence that over harvesting is a major factor in putting the species at risk, and is allowing only a catch and release.

The lake sturgeon is the largest and longest lived of any of Canada’s freshwater species, living more than 100 years, measuring 90-145 cm (3-5 ft.). Identifying characteristics are an underslung mouth, whiskers, and bony plates on sides.

These steps are being taken as harvest levels are projected to increase substantially across the province, partly due to the collapse of the Caspian Sea sturgeon fishery and the ongoing demand for sturgeon caviar fed by illegal sale.

I had no clue Sturgeon were in danger anywhere. I hope the steps they're taking revitalizes the species. They certainly are long lived at a hundred years possible.

an avid fisherman since old enough to hold a fishing pole, i agree with conservation of most species, not just endangered ones

what they've done to sturgeon, world-wide, is criminal grrrrr

Hey it ain't Tuesday. But that is some fish.

Bernard, I didn't either until I saw the news release. I try to keep an eye out for information about newly discovered species (ie. New Guinea a couple of years ago) as well as species who become listed on the risk or endangered lists.

Laughingwolf, I agree with you. I never was much for caviar.

Travis, I thought you might miss this post if I left it out entirely. Those whiskers are kinda cute on the fish.

"Identifying characteristics are an underslung mouth, whiskers, and bony plates on sides."

Hi Barbara, I had no idea sturgeon was in danger. It's great they are now being protected and managed. I think I would feel sad if I ended the life of a hundred year old fish though.

As for Packsaddle, he must know me of old. Debs x
P.S I hope you all had a great Canada Day.

Deb, welcome. I was reading the paper yesterday morning and noticed an article, then looked it up on the Ontario MNR site and there on the front page of the website was the news release. I have the site linked on the side bar under "Conservation / Nature Connections".

I think it's importnat to keep abreast of the animals, insects and plants that are on the endangered list. If they cease to exist, then it is only a matter of time for humans to follow suit.

i'm not a fan of caviar, either... tasted a few times, though

the worst butchering of sturgeon i've heard about is in the black sea :(

What a small world - we shared a girlfriend!

Overfishing is a big problem world-wide. Glad the Canadian govt is doing something about it, at least where the sturgeon are involved.

Linda, the U.S. government is also involved as the Great Lakes are between our countries. Both governments are taking a hard line with commercial fishing operations, and those operators who deal in the black market for sturgeon.

A very fine fish.
Now I have the chorus "caviar comes from the virgin sturgeon" running through my head.