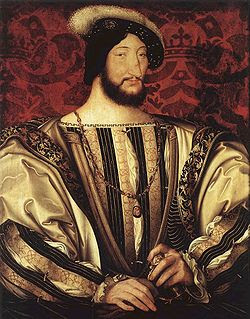 On October 17, 1540, Francis I (photo) ordered the Breton navigator to return to Canada to lend weight to a colonization project of which he would be "captain general". 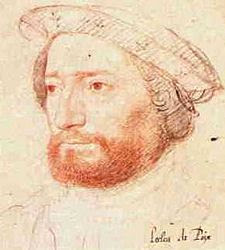 However, January 15, 1541 saw Cartier supplanted by Jean-François de La Rocque de Roberval (photo), a Huguenot courtier and pirate. Roberval was to lead the expedition, with Cartier as his subordinate. While Roberval waited for artillery and supplies, he gave permission to Cartier to sail on ahead with his ships. 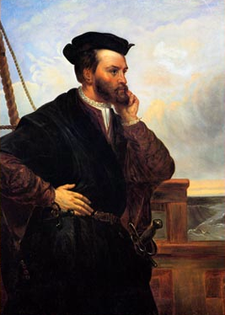 On May 23, 1541, Cartier departed Saint-Malo on his third voyage with five ships and fifteen hundred men.** Cartier was “authorized to take control of these foreign lands “by friendly means or by force of arms.”* This time, any thought of finding a passage to the Orient was forgotten. The goals were now to find the "Kingdom of Saguenay" and its riches, and to establish a permanent settlement along the St. Lawrence River.

Anchoring at Stadacona, Cartier again met the Iroquoians, but found their "show of joy" and their numbers worrisome, and decided not to build his settlement there. Sailing a few miles up-river to a spot he had previously observed, he decided to settle on the site of present-day Cap-Rouge, Quebec (now part of Quebec City). The convicts and other colonists were landed, the cattle that had survived three months aboard ship were turned loose, earth was broken for a kitchen garden, and seeds of cabbage, turnip, and lettuce were planted. A fortified settlement was thus created and was named Charlesbourg-Royal. Another fort was also built on the cliff overlooking the settlement, for added protection.

The men also began collecting what they believed to be diamonds and gold, but which upon return to France were discovered to be merely quartz crystals and iron pyrites, respectively - which gave rise to a French expression: "faux comme les diamants du Canada" ("As false as Canadian diamonds"). Two of the ships were dispatched home with some of these minerals on September 2.

Having set tasks for everyone, Cartier left with the longboats for a reconnaissance in search of "Saguenay" on September 7. Having reached Hochelaga, he was prevented by bad weather and the numerous rapids from continuing up to the Ottawa River.

Returning to Charlesbourg-Royal, Cartier found the situation ominous. The Iroquoians no longer made friendly visits or peddled fish and game, but prowled about in a sinister manner. No records exist about the winter of 1541-1542 and the information must be gleaned from the few details provided by returning sailors. It seems the natives attacked and killed about 35 settlers before the Frenchmen could retreat behind their fortifications. Even though scurvy was cured through the native remedy (Thuja occidentalis infusion), the impression left is of a general misery, and of Cartier's growing conviction that he had insufficient manpower either to protect his base or to go in search of Saguenay Kingdom.

Cartier left for France in early June 1542, encountering Roberval and his ships along the Newfoundland coast. Despite Roberval's insistence that he accompany him back to Saguenay, Cartier slipped off under the cover of darkness and continued on to France, still convinced his vessels contained a wealth of gold and diamonds. He arrived there in October, in what proved to be his last voyage. Meanwhile, Roberval took command at Charlesbourg-Royal, but it was abandoned in 1543 after disease, foul weather and hostile natives drove the would-be settlers to despair.

Cartier spent the rest of his life in Saint-Malo and his nearby estate, where he often was useful as an interpreter in Portuguese language, and he died aged 65 or 66 on September 1, 1557 from an epidemic. No permanent European settlements were made in Canada before 1608, when Samuel Champlain founded Quebec City. 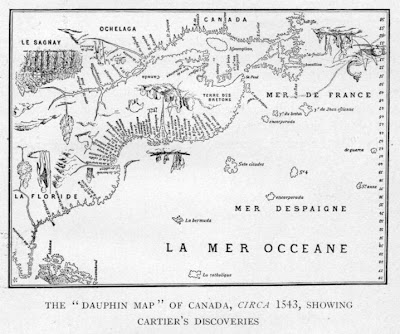 [Dauphin Map of Canada, circa 1543 of Cartier's discoveries - click to enlarge]

I was thinking of you, in Venice, when I snapped two shots of memorials to Giovanni Caboto put up by Italy and by Newfoundland on the wall of the house where he lived.

Always something to learn here - this part of the history was unknown to me. Thank you!

Intersting anecdotes about the journey of Jacques Cartier, but is terribly hard to the Indians who were at home...

I never knew Cartier before. Thanks for introducing him to me :)

Cloudia, I had heard this phrase as a youngster in school and when I saw it related in the Wikipedia article I knew I had to put it into my post.

Chris, then I expect you to post them with one of your magnificent stories to accompany.

RuneE, as I read my historical reference material there are new areas in history for me as well.

François, as was mentioned in this post the Indians were not as friendly after being subjected to the methods of the Europeans.

Rough place to be a settler.

Interesting! I don't know much about Canadian history! Thanks for sharing your knowledge!

Bernard, the eastern part of Canada tends to be humid and cold at the same time which makes for much misery.

Wil, every little bit helps, and your post about skating was terrific!

Another fascinating post Barbara.I enjoy comparing this with our history.About About 250 years after your description in Canada, The French were exploring around our southern coast of Australia at the same time as the English explorer Matthew Flinders,from 1800-1805.The two crossed paths, and although the English and French were at war at the time, the meetings were amicable.Captain Baudin and his crew carved a record of their landing at Frenchman's Rock on Kangaroo Island, south of South Australia where I live.I remember reading where they established a garden, in much the same fashion as that which you've mentioned.By all accounts The French were also very respectful of the Aboriginal people they encountered and learnt much from them.Many places in Kangaroo Island have French names as a legacy from Baudin's visit in the ship "Le Geographie'.Of course, the English claimed Australia, and the rest, as they say is history.May I just add that unfortunately France's presence in the Pacific region has not been as amicable in recent years ie the bombing of Greenpeace's ship the Rainbow Warrior in New Zealand, and the nuclear testing on the Muaroa Atoll(incorrect spelling I'm sure) in the Pacific.

Pam, I think it would be nice for you to write the odd post on your blog about Australia's early history, and you could add bits about textiles.

your article helped me with a project from school. thanks

Niharika, pleased to be of assistance.