Just in case you didn't hear the recent news, 30,000 Atlantic Salmon escaped from a fish farm near Campbell River, on Vancouver Island, B.C. on July 1, 2008. The majority of the Atlantic Salmon, 13 to 14 pounds each, are not likely to be caught and returned. 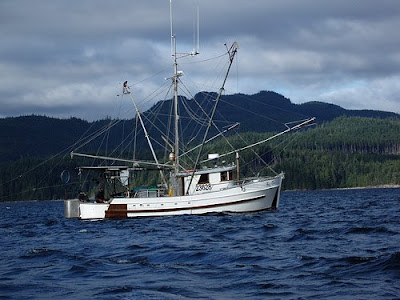 There are serious concerns from environmentalists and local First Nations that the escape will have a negative impact on B.C. native Pacific Salmon stocks. Some of the conerns are that Atlantic Salmon eat wild salmon fry on their way to the ocean. Also, Atlantic Salmon could out-compete and wipe out B.C.'s native salmon species. 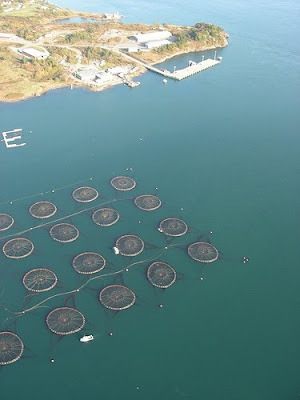 Efforts to recapture all of the Atlantic Salmon have been unsuccessful, as less than 2% have been recaptured from a site north of Campbell River. The fish farm company expects to lose more than $500,000 as a result of the loss of the fish and repairs to the facility. Further, the company owning the fish stock could face charges of negligence, as farms are required to report escapes within 24 hours.

Government and environmental groups are investigating closed containment aquaculture pens to better secure the farmed salmon. To prevent future escapes like these is to farm fish in closed off pens.
Posted by Barbara Martin at 22:57

I really hope it doesn't bother the native fish much. Humans screw everything up it seemss.

crap! sorry barbara, i'm not a fan of open water fish farms to start with, these are further reasons why!

i hope they lose more than the half $m... and all similar fish farms are made illegal... yeah, i know... phat chants! :(

btw - since you screen all posts, does not word verification too make it overkill?

i was unaware i had that going on in mine, til pointed out....

Charles, from what I have read the Atlantic Salmon is more aggressive in its pursuit for life than the Pacific Salmon, and if they end up eating too many of the young Pacific Salmon that will reduce their numbers drastically.

The fines the government will impose on the company are not enough to cover the ecological damage it has caused. Changes in fish farming need to be made which interested parties from outside can assist in, such as writing letters to the governing agencies. In essence, concerned humans need to make a loud squeaky wheel to be heard.

Laughingwolf, instead of chanting write your letters.

The word verification performs an extra filtration against spam that doesn't reach my bulk folder. A function I am grateful for.

that was my way of saying: fat chance, as you know

but yeah, i write the ministries, to no avail, same as contacting greenpeace when they screw up, they don't wanna know :(

They have fish farms to feed people, and I think that has to be at least taken into consideration. Great pictures, Barbara.

This reminds me of the whirling disease farm raised rainbow trout introduced to the streams of Colorado and New Mexico a few years back. Sad all the way around

What is it with this last week and farmed wildlife? Wasn't there a truck that overturned in California last Sunday carrying 12 million (that's million) honeybees? I gather the bees were easier to round up than those unruly salmon. Just goes to show you, humans should mind their own business. And that would be...?

Sarah, perhaps you were thinking about the 12 million honeybees in 330 crates from the overturned truck in New Brunswick. When the driver was accessing a ramp off the Trans Canada Highway the load shifted and the truck overturned. Thank goodness there was a heavy rain that helped contain the bees in and around the truck. Bee experts were called in from Agriculture Canada to help.

Well, humans like to use wildlife to make a buck, which in turn feeds the population.

This next comment is not meant specifically for Sarah or the other commenters, but rather a general one for consideration.

If all the products humans manufacture from animals, insects, fish, etc. is ceased, how will the earth population feed itself? Already there are locations where the people are starving and other places where others feast. With the world population expanding, while the food supplies are dwindling to feed the masses the problem is growing. It's only a matter of time before the have nots decide to take from the haves. Then we will all be in line for endangered species status.

sc, the 12 million bees were being shipped from prince edward island, here in atlantic canada, where they had pollinated blueberries, back to the owner in ontario... truck overturned in new brunswick

owner sez he does not 'like' to rent out his bees, cuz they are pist off for a few days, but the $$$ he makes is good

he has yet to determine how many were killed/lost