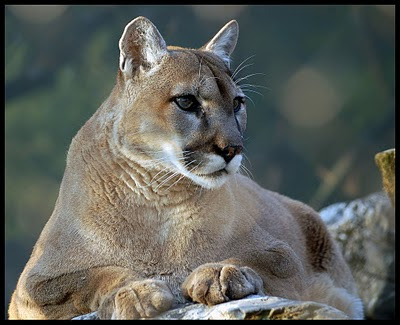 Cougars are on the endangered list in Canada, including Ontario. Because they are elusive animals they are rarely seen.

Recent sightings have occurred in Morden, Manitoba located in the southern portion of the province near the U.S. border at North Dakota. The article in the Mordon Times reports the deer population in the Morden area is larger than normal due to humans feeding them over the winter. The Manitoba Conservation is looking for methods to move this deer population away from human populated areas thus assisting in luring the big cat away.


UPDATE: The Ministry of Natural Resources in Ontario has annouced that there have been 30 confirmed sightings of cougars since 2006 with an estimated population of 550 animals.

For those interested in cougars there is a website dedicated to them: EasternCougar.org .
This site covers all cougars in Canada and the United States.

More information can be found on Wikipedia about cougars, especially for writers looking for characteristics and behaviour in creating a realistic animal.
Photo Credit: digitalART2 CC=nc-nd-flickr.
Posted by Barbara Martin at 21:42

That picture of the cougar is amazing, Barbara. I love wildlife shots. Thanks for sharing.

Although I live in Africa this cat for me is so beautiful one of my favorites and the picture is stunning :)

Kitty.
I've never seen one in the wild. I hope to some day. I hope we rehab the population enough that we don't lose this magnificent creature.

I have a cougar in my novel so these pictures help me envision her a little better so thanks for sharing them :)

Yes, if you bring the prey around the predators will follow.

All cats are a treat to regard but admittedly, like the one in your photo, some are best seen from a distance.

I think the large cats are in danger everywhere. I'm glad some done is doing something.

Teresa, unfortunately this photo was taken in a zoo, but the pose shows an alert animal contemplating something beyond the view of the lens. The photo accompanying the article in the Morden Times is an excellent shot of a moving cougar, complete with three foot tail.

Philip, according to the cougar article on Wikipedia, these cats are more closely related to the smaller felines than the big cats. For the Americas, cougars are second heaviest behind the jaguar.

Leah, when I was riding in the Alberta foothills once, I thought I saw a cougar but it could have been a coyote in the tall grass. They have similar coat colour that blends in so well with their environment.

Lauren, I wish you well on your story.

Charles, it is a much better method than killing the cat.

Frank, most domestic cats, if left to their own devices, can become as elusive as a cougar in the wild. There are cats near where I now reside that are living wild in the parkland catching squirrels and other small mammals.

RuneE, there are conservation efforts everywhere for endangered or threatened animals, but there are farmers or ranchers who feel threatened when these cats come hunting on their land to kill the domestic livestock.

Wyoming apparently has the largest cougar population in the United States, having made a good comeback. It remains to be seen whether the conservationists can keep the population up as their territory is prime cattle country.

They are doing okay in California. I've never seen one in the wild but hear lots of the farmers talking about them.

A young friend of mine (marine biologist) is starting a blog about animal life at the D.C. zoo, which you may like. I will have the link on Sunday.

i bet that would be quite the site

Ronda, if you ever spot one, make a lot of noise and face in its direction and somehow make yourself look larger.

Patti, that sounds great. I look forward to getting the link.

You'll be interested to note that I will be continuing my history posts on Samuel Steele and the War of 1812, and other related history of early Canada.

Josh, cougars are about 2 to 2.5 tall and their body length is long and low with a three foot tail. They are about the same size as an adult human.