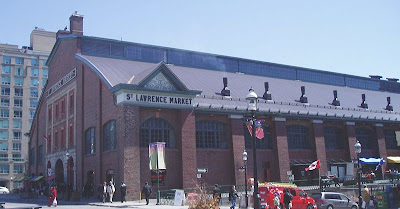 Established in 1803, St. Lawrence Market is celebrating its 205th anniversary on November 1st. It is located on the NE corner of Jarvis and Front Streets.

The tradition of a Saturday Farmers' Market in Toronto began on this site in 1803. Over the years, the market has survived and thrived through many changes, including the Great Fire of 1849 and several reconstructions of the building.

From the Ontario Provincial Plaque placed at the NW corner of Jarvis and Front Streets in Toronto reads the following:

“In 1803, Lieutenant Governor Peter Hunter established a public marketplace here where farmers from nearby townships sold produce and livestock to residents of the town of York (now Toronto). A wooden building was constructed in 1820 and replaced in 1831 by a brick building, which was also used for city council meetings. The market expanded south of Front Street in 1844 with the construction of the Market House and City Hall. It was enlarged again in 1851 when the St. Lawrence Hall and Market was built north of Front Street. The market was an important source of revenue and the City of Toronto rebuilt the north and south market buildings in 1899. The resulting complex, including the present-day south market, was designed by John W. Siddall and completed in 1904. The market remains an important part of Ontario's commercial history.”

The St. Lawrence Market is one of two major markets in Toronto (the other being Kensington Market). It is located west of Jarvis Street, between King Street East and the Esplanade. It was established in the early part of the city's history and was once home to Toronto's first permanent city hall and jail house from 1845 to 1899. Designed by Henry Bowyer Lane, the first floor was formerly Police Station # 1.

Since 1901, the north façade and city council chambers have served as a museum for the city's archives as well as a north entrance to the South Market. Renovations were also made in 1978 following public outcry over a proposal to demolish the entire building in 1971.

A newer market, known as the North Market was built in 1803 under orders of Lieutenant Governor Peter Hunter. Destroyed by fire in 1849, it was rebuilt in 1851, replaced in 1904, and replaced again by the current building in 1968. A canopy that once connected the North and South Markets was removed in 1954. Today the North Market is different things on different days, but its principal claim to glory is associated with the colorful Farmers' Market, the largest in Toronto, that takes place on Saturdays starting at 5 am

On Sundays, from 5am to 5pm, there is an Antique Market where visitors can browse for free for antique collectables provided by over 80 antique dealers.

On the west side of the North Market (Farmer’s Market), the St. Lawrence Snack Bar, Vital Planet health foods, and the Antique Market Shoppe offer their wares during the week. 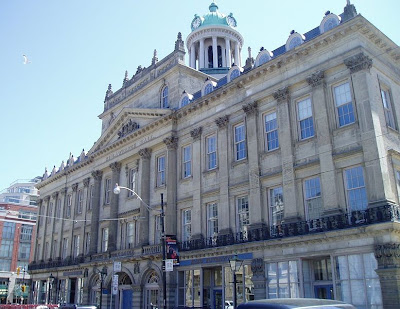 Built in 1850 to serve as the City's public meeting place, the St. Lawrence Hall has hosted numerous memorable events such as: Jenny Lind, the Swedish Nightingale, sang to packed houses here in 1851; and ten years later, Tom Thumb attracted scores of fascinated spectators.

The architecture of the Hall has sweeping Corinthian columns and distinctive cupola, providing an idea of the elegance inside. Walk up the grand staircase (or take the elevator) to the Great Hall, perhaps the most beautiful feature. This authentically reproduced room, with its huge gas-lit chandelier and elaborate ornamental plaster ceiling, can comfortably seat 200 people for dinner. Included in the rental fee are several anterooms and a VIP lounge. Throughout, red plush furnishings and fine paintings complement the decor and add a luxurious touch to any function.

“St. Lawrence Hall is a meeting hall in Toronto, Canada next to the St. Lawrence Market. It was built, alongside the new city hall, in 1850 after an 1849 fire destroyed much of the market. The Renaissance Revival style building was designed by William Thomas. It was created to be Toronto's public meeting hall home to public gatherings, concerts, and exhibitions. Its main feature was a thousand seat amphitheater. For decades the hall was the centre of Toronto's social life. It was here that prominent politicians such as John A. Macdonald and George Brown (fathers of Canadian Confederation) addressed the people of Toronto. It was the main venue for musicians and other performers who came to the city. The lower levels were integrated into the market and were home to stores and businesses. A third story section of the building was known as St. Patrick Hall, an important meeting place for the Irish Catholic Benevolent Union.

By the 1870s the growing city had a number of larger and more suitable performance venues and the Hall entered a long decline. It continued to serve a number of roles, including several years as the home of the National Ballet of Canada. It was fully restored in 1967 as the city of Toronto's project to mark Canada's centennial. Today the hall continues as a venue for events including weddings, conferences, and art shows.”

For a lovely virtual tour of the inside of the St. Lawrence Hall go to the link below.

My Town Monday is the creation of Travis Erwin, founder, (link on the side bar under MTM). There you can find links to other members of the group and their part of the world.
Posted by Barbara Martin at 19:58

I love these markets. Just went to the Lexington Market in Baltimore. Also have the Eastern Market in Detroit, the Reading Terminal Market in Philly.

I grew up in downtown TO. Attended Jarvis C. I. and it is good see see familiar photos of a familiar place.

I think I've only been to the market a handful of times. (I spent the last 25 years in Ottawa.)

Nice architecture. 205 years is ancient compared to the oldest things in my area.

been years since i went to slm, and miss it...

we do have a new farmers' market in hfx, enclosed, so we can shop year round, and all week... and a short walk to the harbor :)

Wow, beautiful market Barbara! It is nice that the building is used on other days of the week as well.

Patti, they have interesting items apart from the usual vegetables, fruit and meat. There is another well frequented market in Toronto, the Kensington Market which I will be posting about at a later date.

Sekhar, I like wandering around inside to look at the different booths, especially the cheese and snack bars.

Jenny, thank you. I go there with a friend who likes to go early to avoid the crowds. Then you get the pick of things.

Travis, that architecture was all the vogue then. But you have the AQHA there.

Tony, markets are great places to go to when you need a bit of exercise.

Webradio, Reb, and Lyzzydee: thank you for your comments.

Wow! You put a lot of work into this piece, Barbara. I really enjoyed it. Cool pictures, too. I lived in upstate New York as a child. We went to Toronto several times. Vague now in my memory. My dad was an electrician on the St. Lawrence Seaway. I was probably about 6 yrs old. Would love to get back that way to visit some day. D

What a fascinating story, I love reading about history, no matter what part of the world it comes from. I love blogging, I have learned so much about other countries. I invite you to come to my posts.

I enjoyed the tour, and those buildings are majestic.

not to mention great, fresh food :)

I love the architecture! Markets are really the centers of cities---one experiences diversity both in vendors, items for sale and patrons.

Donnetta Lee, welcome and I'm glad this post brought back such nice memories.

Margaret, welcome. Here you will find history and nature.

Bernard, the St. Lawrence Hall reflects the elegance of a by-gone era.