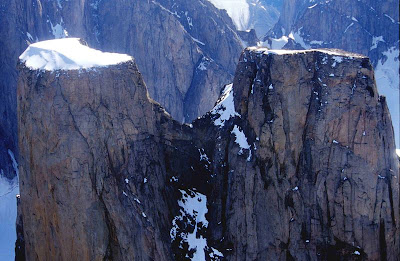 “Mount Asgard is a twin peaked mountain with two flat-topped cylindrical rock towers, separated by a saddle. It is located in Auyuittuq National Park, on the Cumberland Peninsula of Baffin Island, Nunavut, Canada. The peak is named after Asgard, the realm of the gods in Norse Mythology. Mount Asgard is perhaps the most famous of the Baffin Mountains.

In 1976, stuntman Rick Sylvester performed a BASE jump off the mountain for the opening sequence of the James Bond film The Spy Who Loved Me, although the fictional setting was the Alps. 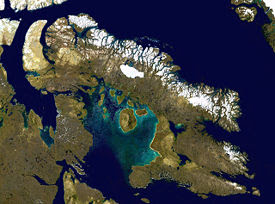 There were Inuit settlements in the Baffin Mountains before European contact. The first European contact is believed to have been by Norse explorers in the 11th century, but the first recorded sighting of Baffin Island was Martin Frobisher during his search for a Northwest Passage in 1576.”

While looking for interesting material for posts, I have come across a variety of items which I thought might interest others. This is one of them. Please comment if you would like more.

What a magnificent photo of Mount Asgard Barbara. I am not suprised it featured in a film. Rick Sylvester must be a very brave stuntman, however to me, that majestic scene lends itself more to science fantasy. How many protagonists have made their way across such scenes, separated by that saddle!Yes, more please - you have an interesting array of stories and scenes, always!Thank you for your visit and recent comment.

Hi Barbara, I connected with you via my website. We are both Canadians (I'm from Vancouver). I notice your entries here and wondered if you might having anything that would fit in with my TRAVEL THRU HISTORY web site. Please check it out
www.travelthruhistory.com

Thanks for reading my blog. I've been rather remiss lately, with so many other things on the go.
Will try to get back to yours too.

Mount Asgard reminds me of the Aiguille du Midi whose "sole" summit is also flat, located in the Alps in France.
Bravo again for your very interesting blog.

It looks marvelous. And even though I'm not passionate about climbing I still enjoy mountain views :)

Pam, stuntmen are well paid for their endeavours. The landscape is suitably challenging for anyone who dares to venture there.

Wynn, I'll check out your history site for sure.

Dark Wolf, welcome. I am more of a hiker than a climber as I have a fear of heights. Companions have been able to get me past tricky spots.

Willow, they show the lay of the land well. It's an excellent tool for research of an area for imagining new landscapes for creative works.

Beautiful. Stark, wild. Doesn't look terribly inviting but I'd still like to spend a few minutes there. Wish I had the talent the guy had in Jumper.

Charles, I posted this because of the remoteness. A truly inhospitable place.

That opening scene from the Bond film can still take one's breath away. Great stunt, beautiful pics, and now I know the rest of the story. Thanks.

another range i had no clue about, thx barbara....

David, the behind the scenes story do tend to be quite interesting.

Tony, of the Canadian Arctic there are a few things I do know, but will be posting those I learn to share.

I really enjoy your historical and visual perspectives of Canada's naturar beauty. Do keep it up.

Everything interesting you so far, also interests me. :)