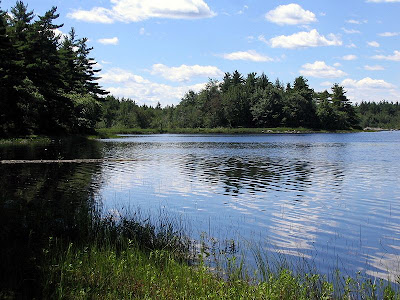 Kejimkujik is the only inland park in the Maritimes, with many lakes and rivers set in lush woodlands and rolling landscapes. Visitors will find many canoe routes, portages and hiking trails.

For fishing enthusiasts, the angler needs to obtain a fishing license, the season is from April 1 to August 31 inclusive. The fishing areas are divided off into non-fishing areas, other areas where the daily catch is a maximum of 5 fish, and the western half of the park where there is catch and release only.

Of the wildlife available, visitors might see any one or more of the following: white-tailed deer, porcupine, beaver, coyote, American marten (rare, with 130 reintroduced in 1987), and black bears. There are approximately 178 varieties of birds found in this region, more particularly the common loon, woodpeckers, barred owl, warblers and other northern and southern species. The is the richest area for turtles in Atlantic Canada: eastern painted turtle, snapping turtles, Blanding’s Turtle (first discovered in 1953 and listed as an endangered species in Nova Scotia), snakes, salamanders, seven species of frogs and one toad. Rare animals in the park are: flying squirrels, the ribbon snake, and the Piping plover. 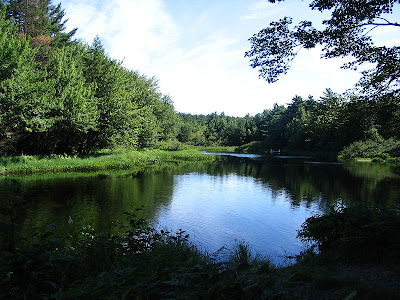 For thousands of years the Mi’kmaq aboriginals canoed the lakes and rivers, setting up their camps for hunting and fishing. European settlement in the area began around the 1820s.

For the campgrounds in the National Park camping permits need to be obtained through www.pccamping.ca.

For hikers, there are 15 trails ranging from distances of 0.4km return to a 6 km loop. For wilderness seekers the park contains over 80% of backcountry which is accessible only by hiking trails and canoeing.

I'm glad we do not have a fishing season here.

Barbara, I think you're dreaming these places up. There can't be such beautiful places within a few hours from here.

Webradio, this area is very nice.

Willow, it certainly does.

Travis, Parks Canada has fishing seasons on all its parks to prevent over fishing. Later I will be posting about ice fishing.

Patti, you can check the Parks Canada link on my sidebar for other exquisite places to visit. Soon I will be posting about the nice parks in Manitoba and Saskatchewan.

These are such beautiful photographs, Barbara. I have wanted to visit Canada for such a long time. Perhaps it is time to do so. Too bad we need a passport these days...

That looks like a peaceful place to stay for a week or three!

Hello Barbara, I've missed dropping by your blog recently. I started using a Google "follower" program that would notify me anytime one of my favorite bloggers posted. Unfortunately, I had your blog address wrong in the darn thing! That is now repaired and I can stay current with your writing.

Your last two posts were marvelous. I'll be visiting the Toronto Distillery district in a few weeks, as I'm in town to do a bit of research on Toronto's abandoned tunnels. Anyway, nice to be back to visit!

Debra, it is unfortunate the border is more difficult to cross these days. I read somewhere an alternative to the passport was a driver's license and another piece of ID; but I will check for you.

RuneE, I have always liked greenery and water.

Rick, ah the trials of human error. I too suffer from that malady.

There's an old subway tunnel link at Bay on the Bloor-Danforth line that is used during major repair work.