Travis Erwin brought up a valid point in his My Town Monday post about the rules of posting an article on this topic. Lately, my MTM posts have been with a historical slant on Ontario during the War of 1812. Although this war had a strong impact on Canada as a whole, the posts about it have little, if any, to do with the City of Toronto or its immediate surroundings. For the future I will post historical or tourist-type articles about Toronto, and move the War of 1812 articles to Wednesday (which could end up being the never ending story).

Today’s post is on the Gooderham and Worts Distillery Complex 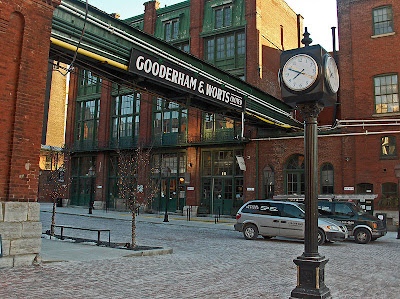 
The Distillery District is a historic and entertainment precinct located east of Downtown Toronto. It contains numerous cafes, restaurants and shops housed within heritage buildings of the former Gooderham and Worts Distillery. The 13-acre (52,000 sq. m) district comprises more than 40 heritage buildings and 10 streets, and is the largest collection of Victorian era industrial architecture in North America.

The Gooderham and Worts Distillery was founded in 1832, and by the late 1860s was the largest distillery in the world. Once providing over 2 million gallons of whisky, mostly for export on the world market, the company was bought out in later years by rival Hiram Walker Co., another large Canadian distiller. Its location on the side of the Canadian National Railway mainline and located at the mouth of the original route of the Don River outlet into Lake Ontario which facilitated transport connections to the rest of Canada and indeed the world, and the entire area was once the industrial centre of Toronto and transhipping hub.

With the de-industrialization of the surrounding area in the late 20th century, and the winding-down of the distillery operations, the district was left increasingly derelict. Surrounding industrial and commercial buildings and structures were often demolished, leaving the former distillery surrounded primarily by empty lots. The closing of the remaining distillery operations in 1990 created redevelopment and investment opportunities for a district that contained the largest and best preserved collection of Victorian-era industrial architecture in North America.

While the site awaited redevelopment and reinvestment, the district's unique ambiance began to attract numerous film shoots. Since 1990, the site has served as a location for over 800 film and television productions. See link: http://www.thedistillerydistrict.com/hollywood_north.html

In 2001 the district was transformed into a pedestrian-oriented arts, culture and entertainment neighbourhood followed with a reopening in 2003 to the public to great acclaim. The new owners refused to lease any of the retail and restaurant space to chains or franchises, and accordingly, the majority of the buildings are occupied with unique boutiques, art galleries, restaurants, jewellery stores, cafés, and coffee shops, including a well-known micro brewery, the Mill Street Brewery. The upper floors of a number of buildings have been leased to artists as studio spaces and to offices tenants with a “creative focus”. A new theatre, the Young Centre for the Performing Arts, has opened on the site and serves as the home of the Soulpepper Theatre Company and the drama productions of nearby George Brown College. There are plans to develop residential condominiums, offices and more retail space on the vacant lands that surround the district. 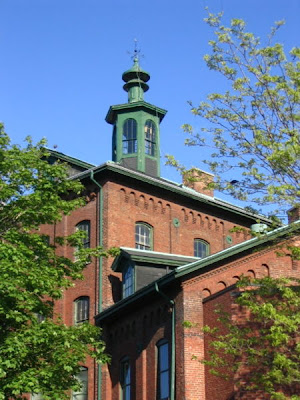 
The former distillery consisted of a series of buildings, centred around a seven-storey windmill and wharf. Although the windmill and wharf have long since been demolished, the inventory of the main structures on the site is as follows:

the Stonehouse Distillery, designed by David Roberts Sr., near the then shoreline of Lake Ontario;
a 31-metre (100 ft) chimneystack;
the Malt House (built in 1860), now called the Maltings;
Rackhouse D;
the Molasses Storage building;
the Boiler House;
the Stables;
the Cannery;
the Paint Shop;
the various tankhouses (originally seven of which only three survive today);
the Denaturing Room;
Rack Houses M, G, and J;
the Pump House;
the Case Goods Warehouse;
the Wharf (now demolished);
the Cooperage;
the Grain Elevator and Warehouse, located at the wharf (and since demolished);
the Pure Spirits Building (built in 1870); and
the Grist Mill/Windmill, which was built in 1832 at a height of 21 metres (71 ft). It ceased to be a windmill in 1846, and was rebuilt after damage from a storm in the 1850s and disappeared by 1866. A replica was built in 1954, but it was demolished to make way for the Gardiner Expressway. 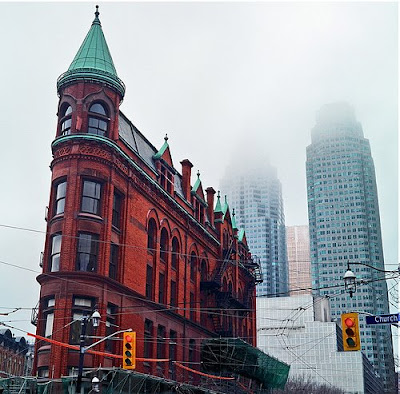 
The red brick Gooderham Building (commonly referred to as the Flatiron Building) at 49 Wellington Street East in Toronto is located on the eastern edge of the city's financial district (east of Yonge Street), on the north side of the Front Street (St. Lawrence) neighbourhood wedged between Front Street and Wellington Street, where they join up to form a triangular intersection. Although a prominent landmark both for its colour and shape, it is only five storeys high. It is also the first flatiron building in a major city.

It was built in 1892. The previous building was shorter but in the same shape and was called the Coffin Block. It was built by architect David Roberts, Jr. and originally cost $18,000 to construct for distiller George Gooderham, son of the founder William Gooderham. It was the office of the Gooderham & Worts distillery until 1952 and sold by the Gooderham Estate in 1957.

The building was declared a historic site in 1975. In addition to the fine architecture, there is a large patio, and a small pub in the basement. The building is open to view from Monday to Fridays at 9am to 5pm.

A personal comment on the food in the basement pub is “excellent” and they serve the beer cold in a chilled glass.

WT was just in the Brewery District not too long ago and had coffee at Balzacs. He was telling me about the wonderful history of this area. What a beautiful and interesting post!

Hope you and yours enjoyed your Thanksgiving weekend!

What a history! I checked the link and being a detective aficionado it was interesting to see the Nero Wolfe series filmed there. Plus, Crowe's Cinderella Man had those realistic exteriors and now I know why. Barbara, your posts always have wonderful historical facts. Thanks.

I love these red brick and atmosphere that this emerging architecture. Toronto appears to be a city full of personality.

The photos are pretty...

My town, Bala, Ontario, Canada, is in an uproar over a refurbishing and new hydro dam project. I think we need to move into the new millennium...
Love the MTM idea.

Willow, we are enjoying our weekend. The Distillery District is a pleasant distraction from the hustle and bustle of the workdays.

David, there were a few movies I had seen where I thought the background looked very familiar. Thank you on the feedback about the posts.

Marie, I, too, appreciate the antiquity of the place. Sometimes I think I can hear the carriage wheels on the cobblestones.

Reminds me so much of Manchester England where we spent a year.

I'd love to come to your city and explore all these great spots.

Thanks to your descriptions and photos I am able to do that a bit from my computer.

Hope you didn't think I was discouraging your historical posts. I find them interesting and educational. As I did this post. My dad used to drink Canadian whiskey, but I have no idea where it was made or if it was Canadian in name only.

Babara, great post, I love old buildings and to know the history of them is so fulfilling. I also love flatiron buildings, I would love to live or work in one.

Jenny, MTM is a good idea and so is the new hydro dam project in your home. Welcome.

Patti, it's that Victorian-era architecture which I just love.

Mary, there are a multitude of sights and places to visit in Toronto.

Sekhar, perhaps you would like to join MTM. I would enjoy learning about your home in India.

Travis, I thought some readers might be getting a tad bored with the dry history lessons.

As to the brand of whisky your father drank, if it was Canadian Club...this was made by Hiram Walker and Sons. This weblink will provide you with information and how to make a video ad starring your father: http://www.canadianclubwhisky.com/

Reb, then you will see more MTM posts on old buildings in Toronto and the surrounding areas.

I can't believe I didn't make it down to the Distillery District this summer. Well....I'll need another trip to TO. As usual, a great post!

The Gooderham Building is the best for me in this series

It sounds as if Toronto did the restoration of the Distillery District right. Very refreshing to hear of a well-done project after so many flops in so many cities. Sounds like a place my husband and I would enjoy visiting. Thanks for the history and pictures.

Barrie, then lunch is on me when you do return.

Thomas and Shilpy, the Flatiron building has stunning architecture which drew it to me.

Shauna, the place is large enough for repeated trips to look at everything.