C.J. Sansom’s second book, Dark Fire, a complex murder mystery, was published three years after Dissolution in 2004. The paperback was released in 2007. The novel was awarded the Crime Writers’ Association Ellis Peters’ Historical Dagger award in 2005. 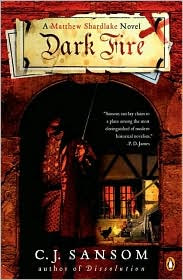 Dark Fire is set in 1540, in Tudor England, three years after Matthew Shardlake’s mission to Scarnsea (Dissolution). King Henry VIII continues to dissolve the monasteries after breaking with Rome and declaring himself the Supreme Head of the Church of England in 1534. Now spreading rumours throughout London are of Henry wanting to divorce his current wife, Anne of Cleves, and take Catherine Howard, a young and pretty Catholic, as his next wife. This would put King Henry’s Vicar General, Thomas Cromwell’s position in jeopardy as he had arranged the marriage with Anne of Cleves.

Despite Matthew Shardlake’s attempt to keep a low profile in his legal practice, his involvement in a murder case, defending a girl accused of brutally murdering her young cousin, brings him back into contact with Thomas Cromwell. Cromwell gives the girl a two week stay of execution with the stipulation that Shardlake undertake a dangerous assignment.

An official of the Court of Augmentations has discovered the formula to the secret of Greek Fire, the legendary substance lost for centuries, in the library of a dissolved London monastery. When Shardlake is sent to recover it, accompanied by Cromwell’s trusted assistant, Jack Barak, he finds the official and his alchemist brother brutally murdered, and the formula stolen.

While working for Cromwell, Shardlake manages to find the time to investigate Elizabeth Wentworth’s alleged crime. She has refused to defend herself, preferring to remain silent while imprisoned in a squalid dungeon. If she does not speak she will undergo pressing (torture of weights) until she does or dies. Shardlake is convinced there is more to her story than meets the eye.

Cromwell’s position is threatened by the resurgence of a catholic faction, led by the Duke of Norfolk; and he has promised King Henry VIII a demonstration of the Greek Fire in two weeks time. By presenting this ancient weapon to the King, it will secure the Vicar General’s position.

Soon Shardlake discovers it is difficult to distinguish friends from foe in both cases. The body count rises while Shardlake’s investigation brings him closer to the truth and the deadline for Elizabeth’s execution. He enlists the aid of Guy Malton, a former monk (from Dissolution), now an apothecary to explain ancient manuscripts in alchemy and to assist in curing the gaol fever Elizabeth has contracted from her unsanitary environment.

Dark Fire is well researched, providing descriptions that capture the stench of London, the conditions of the poor as they struggle to survive, the privilege of the wealthy, the legalities and cruelties of the era. There is also delightful dry British humour found throughout.

This book, like the first, was difficult to put down leading a compelling, brisk pace to discover the next set of clues.
Posted by Barbara Martin at 16:23

Thank You Barbara for the history...
Je don't know if the book is in France...

This sounds full of intrigue and very compelling. After watching the first season of Showtime's The Tudors, I'm ready for the next set of dvds as soon as it's released... these individuals certainly are fascinating and make a great springboard for both historical and fictional pieces. Great review. Thanks.

Thanks for your encouraging comments on my blog, Barbara. I won't forget your kind offer to review my book here. (Assuming you like it... !!!)

Webradio, you can get it through Amazon.co.uk or there may be a France affiliate.

David, and there are all those descriptive tidbits I left out which readers will enjoy, like the seductress after Shardlake for information.

Leigh, I am quite certain your book will do well. Creepy stories with psychological elements lure readers in. As I write creepy stories, albeit in a different genre, it is the foundation of good reading material.

Sounds good. I've not heard of this book but will have to check for more information on it.

Barbara, if you keep up these stimulating reviews, you're going to cause a resurgence in reading!

Charles, many of the books I am introduced to come from articles in Writer's Digest.

Rick, goodness you guessed my intention.

Tony, the author provides detailed observations and descriptions of the people, politics and living conditions of the era.

Britta, thank you. It has everything between the covers to keep me reading and happy.