A famous wicked character often portrayed in horror movies is the vampire, Count Dracula. Count Dracula is a fictional character, the antagonist of Bram Stoker's 1897 Gothic horror novel Dracula. Some aspects of his character may have been inspired by the 15th century Romanian Prince, Vlad III the Impaler. 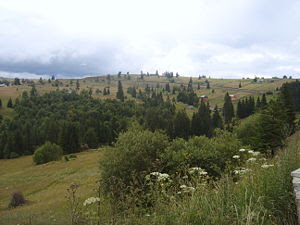 Count Dracula (his first name is never given in the novel) is a centuries-old vampire, sorcerer and Transylvanian nobleman, who claims to be a Székely descended from Attila the Hun. He inhabits a decaying castle in the Carpathian Mountains near the Borgo Pass (Tihuta Pass – photo). Contrary to the vampires of Eastern European folklore which are portrayed as repulsive, corpse-like creatures, Dracula exudes a veneer of aristocratic charm which masks his unfathomable evil.

Bram Stoker's Dracula is a 1992 horror-romance film produced and directed by Francis Ford Coppola, based on the novel Dracula by Bram Stoker. It stars Gary Oldman as Count Dracula in an ensemble cast, also featuring Keanu Reeves, Anthony Hopkins and Winona Ryder. The score was composed by Wojciech Kilar and the closing theme song “Love Song for a Vampire” was written and performed by Annie Lennox. The film was a notable box office hit and won three Academy Awards in 1993. It also established Oldman as a popular portrayer of villains in American film.


Research and photo: wikipedia
Posted by Barbara Martin at 17:11

Somehow, I missed this one. I'll hunt for it for Halloween. Love your creepy series, Barbara :)

You forgot one important detail. And that is that the Legendary Tom Waits fulfilled the role of Renfield.
He also gave his voice to Oldman in the scenes where Count Dracula is transformed, as the directors thought that Oldman's voice wasn't beastly enough.

Awesome movie overall. Not as good as the book, obviously, but I've yet to see a movie that is.

L.A., this movie starts out slow but becomes quite graphic as events unfold.

Will, thank you for pointing the detail out.

Movies are often mere shadows of the original story.

Oldman was definitely good, but I have a soft spot for Langela. Maybe I'm just old school. ;) *L*

Well, Vlad Tepes (the Impaler) is my favourite historical figure of my country. Despite his short lived rule he achived quite impressive things. He was cruel, true, but who wasn't in Medieval era? Also, he was betrayed by his fellow countrymen, sadly.
As for the legend, it is just a legend (or maybe not ;D). Really, I think the association comes from his surname Draculea (something difficult to translate in English, related to the Devil) and because he was the son of Vlad Dracu' (Vlad the Devil).

The book is one of my favorite, although I am not very fond of vampire novels. And the 1992 ecranization I think is the best movie about Dracula so far :)

I forgot, sorry. Barbara, thank you for the link in your blogroll, I added your wonderful blog to my blogroll too :)

Dracula has always scared me.

I thought the Oldman version was very good, and I generally preferred it to any that went before. I'm not so old school when it comes to vamps.

I linked this post to my halloween horror stuff.

When I was growing up, I loved the Langella movie, but Oldman did a fantastic job, as well. My friends and I would act out the Langella version in my friend's dark garage for our neighbors and I was always Lucy...scary make up and all. Such fun! :)

I added your link to my sidebar, too. Thanks for stopping by blog yesterday.

Lana, for me it depends on how deep the actor immerses themself into the role.

Dark Wolf, thank you for a deeper look.

I like to watch the odd horror movie now, although when younger I couldn't get enough.

Your book reviews assist me in keeping abreast of the sci-fi and fantasy books, and artists.

Pamela Terry and Edward, welcome. He has scared me too, but the key is not to look into his eyes.

Charles, this version brought in a deeper sense of suspense despite knowing how most of it would progress. They brought in more of the carnal desires that were only hinted at in the earlier versions.

Thanks for the link.

Michele, the creative imagination is a wonderful thing.

Gary Oldman can be the creepiest character, can't he? Willies!!!

Thanks for the picture of Transylvania. Not at all what I pictured. I'm undecided on my favorite Dracula, but I did really like Frank Langella in the role.

even the best movies never live up the the images i create in my own mind's eye... but this was a good one :

Shauna, I forgot to post a photo I found of the Carpathian Mountains. They are extremely rugged and inhospitable. Check out Wikipedia where there are a couple of good photos.

Tony, often what images you garner from the book are better than any director of a movie can dream up.

The Carpathian Mountains are beautiful. We do have some very beautiful landscapes there, worth seeing.
Unfortunately, nowadays they are cutting the woods like crazy, without shame or respect for law (sometimes with the law officers included). And we don't know when all this will stop. Hack, I really hope they will stop.

I saw this movie on TV, it was great, it was scary.

Dark Wolf, the environment issues affect everyone. I'm sorry to hear about the tree cutting.

Margaret, nice to see you back.

There was some great stuff in that version. Great stuff.