Dissolution is the first novel of a series by C. J. Sansom, a compelling historical mystery of Tudor England, released in 2003. This book was nominated for two of the Crime Writers’ Association Dagger awards in 2003. 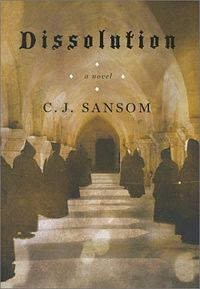 Dissolution introduces Dr. Matthew Shardlake, a hunchback lawyer in the service of King Henry VIII’s Vicar General, Thomas Cromwell during the Reformation. King Henry has recently declared himself “the only Supreme Head in Earth of the Church of England” through The Act of Supremacy 1534. In the same year, the Treasons Act made it high treason, punishable by death to refuse to acknowledge the King as such. The country is waking up to savage new laws, rigged trials and the greatest network of informers ever seen. These are the circumstances that loom in the background of C. J. Sansom’s complex murder mystery.

King Henry through his authority has passed the First Suppression Act of 1536 to dissolve small monasteries, and the Second Suppression Act of 1539 to dissolve the remaining monasteries. In 1536, the Augmentations Office was established to handle the receipt and processing of goods from the dissolved monasteries. Cromwell learns the government official he sent to investigate a large Benedictine Monastery in the fictional Scarnsea, Sussex has been found beheaded in the monastery’s kitchen. The same day a sacrificed rooster on the church’s altar is discovered along with the missing Church relic.

Cromwell sends Dr. Matthew Shardlake and his assistant, Mark Poer, to the monastery to investigate the official’s suspicious demise. While the two investigators are in residence at the monastery, several other murders occur, including an attempt on the life of Shardlake after he discovers corruption, lust and greed in the ranks of the monks.

Shardlake returns to London, finding himself in favour of the Church reformation for a spiritual sake while realizing that King Henry and Cromwell have financial agendas in mind. Shardlake eventually begins to question his own belief in Cromwell`s ethics, and some of the methods the latter uses to obtain the results he desires to keep in King Henry VIII`s favour.

C.J. Sansom use of descriptive passages of the cold winter in the South of England, are enough to chill the reader to the bone. His historical religious and political descriptions are informed and educational.

Dissolution held me from page one. Once I began, I found it difficult to put down. C.J. Sansom has provided rich period detail and suspense that propels you on at breakneck speed to learn each of the clues while enjoying the sounds and smells of Tudor England.

A nice addition to the hardcover book is the detailed map of Tudor London on the inside covers.

It's been a while since I read a good historical. Right now I'm on White Oleander by Janet Fitch.

I've not been terribly interested in the Tudor period but you make this book sound like a worthy read. I'll check it out.

Steve, I have the second book "Dark Fire" which is also an excellent read. The author has chosen a period of history that is filled with conflict.

Charles, it is an interesting period of history where conflict abounds for storytellers.

Nice review, Barbara. This sounds like a book I would enjoy. I love the Tudor period!

Willow, I am particular about the books I read. This author aptly describes his characters, the countryside or the city dwellers. You can visualize while you read, and as a good mystery the clues are carefully found through good investigative work.

You sold me Barbara. I'm getting a copy. Wonderful recap, by the way.

Sounds like a good read Barbara, I'll note it. Thanks.

Rick, Pam: I have read the second book "Dark Fire" which I will be posting about next Friday. It carries the same well written features as the first; and then there are the two other books in this series.

Sounds like an interesting book, Barbara. Thanks for writing the review. I've passed the link on to two friends who enjoy historical mysteries. I've enjoyed the Ursula Blanchard series by Fiona Buckley, set in the court of Elizabeth I.

Linda, whose back is slowing getting better