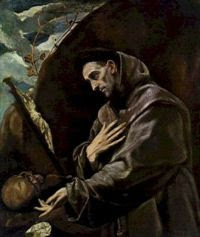 St. Francis of Assisi (1182–1226) was the founder of the Franciscan order, and known as the patron saint of animals and the environment. The son of a wealthy merchant named Pietro di Bernardone, he publicly denounced his father’s wealth in 1206 and dedicated his life to prayer and serving the poor. Pope Innocent III eventually gave Francis and his followers permission to preach, and he ordained Francis a deacon. The followers of Francis were called Friars Minor, or “the lesser brethren.”

There are many legends about St. Francis, including the following from Wikipedia:

“Another legend from the Fioretti (an anthology) tells that in the city of Gubbio, where Francis lived for some time, was a wolf “terrifying and ferocious, who devoured men as well as animals”. Francis had compassion upon the townsfolk, and went up into the hills to find the wolf. Soon, fear of the animal had caused all his companions to flee, though the saint pressed on. When he found the wolf, he made the sign of the cross and commanded the wolf to come to him and hurt no one. Miraculously the wolf closed his jaws and lay down at the feet of St. Francis. “Brother Wolf, you do much harm in these parts and you have done great evil…” said Francis. “All these people accuse you and curse you…But brother wolf, I would like to make peace between you and the people.” Then Francis led the wolf into the town, and surrounded by startled citizens made a pact between them and the wolf. Because the wolf had “done evil out of hunger”, the townsfolk were to feed the wolf regularly, and in return, the wolf would no longer prey upon them or their flocks. In this manner Gubbio was freed from the menace of the predator. Francis, ever the lover of animals, even made a pact on behalf of the town dogs, that they would not bother the wolf again. It is also said that Francis, to show the townspeople that they would not be harmed baptised the wolf.”

This legend and others exemplify the Franciscan mode of charity and poverty as well as the saint's love of the natural world. Francis believed that it was the duty of men to protect and enjoy nature.

So, in 20 years it will be the 800th anniversary of his canonization!

Barbara you've hit the nail on the head. St. Francis is my favourite saint, Lady Chatterly's Lover one of my favourite books, and the "Hey-Diddle-Diddle,cow jumped over the moon theme was an art theme I was using for a while ago,so I really like the Gary Rith Creation you have featured on the side bar.Didn't know it was St. Francis's feast day today-will note it in the diary.

Thanks Barbara. Once again a piece of history I was unaware of.

Neat story, but since I'm not a Saint, I believe if I'm in an area where wolves abound, I'll bring along my twelve gauge. :)

Pam, I purchased the "Cow Jumped Over the Moon" plaque from Gary Rith Pottery and the nice man added the dog plaque into the box as well.

David, St. Francis had visions from angels and received messages which set him on his path. I will be posting about this at a later date.

Bernard, you have to die before you become a Saint. Wolves aren't that scary, unless there is a lack of their prey around: deer, moose, caribou and other assorted ground dwellers like rabbits, squirrels, or mice, etc.

My eldest brother worked for a time in Ft. MacMurray and one bad winter residents learned not to chain their sled dogs outside. They found only collars.

I have had personal experience with wolves, but will leave that for another post.

Whether all the stories of St. Francis are true or not, I've always looked upon him as a hero worth emulating.

I also love St. Francis and love his quote "Make me a channel of your peace". I have a beautiful vintage gold medal with his profile that I wear every day to remind me. Another wonderful post, Barbara!

When we were children our mother told us the story of Saint François and wolf.
The message of Peace and Love of Saint François D'Assise is universal that either believer or not.
Another good reason to enjoy your blog.
See you soon.
Marie Thé et François.

My wife teaches in a Catholic School and my boys attend so know a good bit about St Francis.

Wow, I miss one weekend and you've been busy!

nice wee tale on francis, must be a european thing re. wolf predation on humans?

in north america, there is not a single recorded wolf killing of a human being since record keeping began, though there are some stories about stalkings by some old or ill ones, trying to find food

coyotes have been known to attack children, left unsupervised, but they are mere cousins of the wolf

I too have had contact with wolves. They are not to be taken lightly, and they are always hungry.

Interesting post, Barbara. Actually, I'd love to see wolves in the wild. We heard them but didn't see any when we were at Yellowstone. They've inspired me to write a werewolf story. :-)

I love St. Francis too. I hadn't heard this story before. I have a biography of him sitting in my to-read bookcase. This post inspired me to get it out to read soon.

Charles, all legends have some truth to them. St. Francis was able to make changes where they were needed for the poor, animals and the environment. We should all think more like him.

Willow, your thoughts are in the right place.

Marie, love is the answer for everything.

Travis, then you are well versed.

Steve, that comes of having extra time on my hands.

Tony and Bernard, yes, wolves tend to stay away from humans unless there usual food source has become depleted.

Any animal that tends to travel in packs: wolves, dogs and humans, need to be watched carefully. They are all opportunists.

Shelley, there is a wolf reserve in Ontario which I will be doing a post on. They walk the shadows of the forest watching humans who enter, while humans rarely see them. We, city dwellers, seem to have lost that awareness which necessitates survival in a wilderness.

Shauna, you will not be disappointed. St. Francis has an interesting story, complete with visitations from angels.