Gros Morne National Park is a World Heritage Site located on the island of Newfoundland in the Gulf of St. Lawrence. 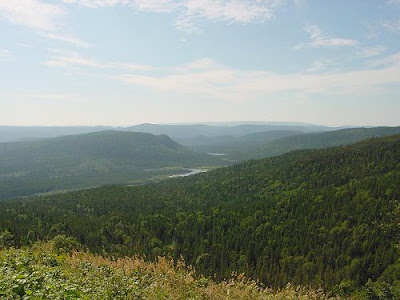 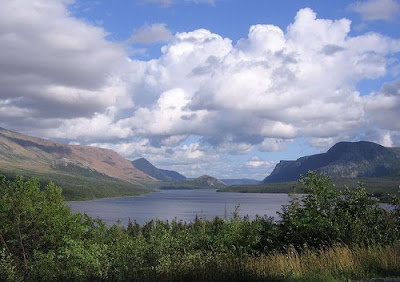 From June to September there are two 2.5 hour boat tours: one on Trout River Pond, a 15 km long former fjord, lying in a glaciated valley between the golden Tablelands and the massive cliffs of the Gregory Plateau; and the second tour on Western Brook Pond between massive billion year old cliffs. 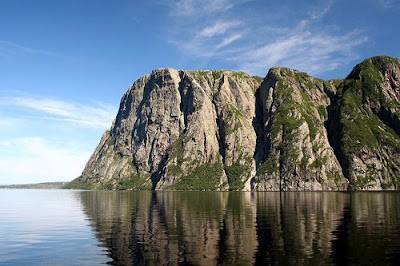 
The Western Brook Pond fjord in Gros Morne National Park provides a dramatic setting for a boat tour. The Long Range Mountains, the northernmost extent of the Appalachians, contain numerous glacially-carved fjords. One of the most spectacular is the Park's largest lake, Western Brook Pond. This 16 km lake with a depth of 165m is home to Atlantic Salmon, Brook Trout and Arctic Char, as well as an unusual colony of cliff nesting gulls. 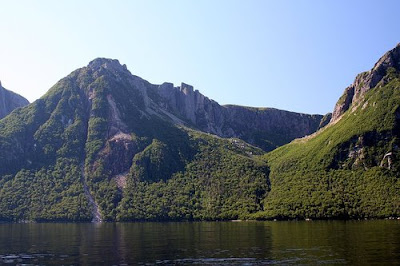 
The coast along the Gulf of St. Lawrence from Trout River to Bonne Bay includes the Green Gardens and three primitive campsites for hikers: picnic tables and pit toilets. Campfires are only permitted on the beach. Permits for these campsites can be purchased from the Park Warden. 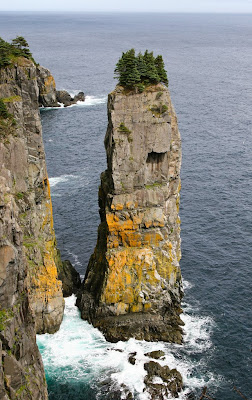 This coast has a wonderful array of sea stacks, coves and beaches topped by lush cliff-top meadows. Residents of Trout River graze their sheep in the summer on these meadows.


The animals that are now considered native to the Island made their way over in the past 15,000 years, came from the mainland by swimming, flying or walking across the pack ice. This isolation has created subspecies, 9 of the Island’s 14 native land mammals are distinct from their mainland relatives. Native animals are: the little brown bat, northern long-eared bat, the Arctic hare (rare—lowest reproductive rate of any hare or rabbit in the word—one litter per year with only three young),
American beaver, meadow vole, muskrat (rare), wolf (extinct), red fox, black bear (larger than its counterparts in North America – 90 kg to 270 kg), ermine weasels, marten (endangered), otter (uncommon), lynx, and caribou. 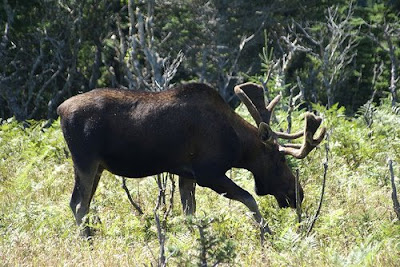 There is no legal hunting in Gros Morne National Park.

For bird watchers there are 239 species of which 105 have nested on the Island.

Other activities of the park include kayaking, swimming, hiking, wilderness hiking, picnics, cross-country skiing and snowmobiling.

To enter this wilderness park for the activities you plan to undertake, you must be aware of the park’s natural hazards, be properly equipped and prepared for emergencies. Two fundamental areas that are required: survival, and hypothermia. For more information on these topics refer to the St. John Ambulance “Official Wilderness First Aid Guide”.

Ever read The Shipping News, about Newfoundland? A pretty good movie too...boy, I would LOVE to go there.

Your photos were giving me the strongest urge to go fishing until I saw that HUGE moose!! Are they all that big? Somehow, in my mind, they were much smaller. Yikes!

Love those flowers with the dew on them. they look so fragile.

Lots of these landscapes would be perfect for heroic fantasy or historical settings. Though for imagination only. I wouldn't want them garbaged up by Hollywood.

Trout River. Just the name gets me excited.

Gary, no I haven't read it. Be prepared for the long ferry ride. I will be posting about this island again in a couple of months.

Willow, moose are fairly big. They stand 6 to 7 feet at the shoulder. Males weigh 380 - 720 kg (850 - 1580 pounds), while females weigh 270 - 360 kg (600 - 800 pounds). This particular bull moose is not angry at the people, but rather curious. The couple making a hasty retreat likely did something to attract his attention. If the moose was angry, his head would be lowered and he would be galloping at them not trotting nicely up the road.

Charles, Newfoundland has both boreal forest and subalpine terrain. On a future post of the area I will show more native flowers.

The Tablelands above look like a moon surface with bits of vegetation.

Travis, then it's evident you're easy to please.

I love those lonely, beautiful regions! If I had the opportunity to travel to Canada and had to choose a special region or a special trip, I would be completely at a loss: You show too many beautiful places in Canada :)

What a lovely trip through this park. I can practically smell the fresh, cool air.

A galloping moose. I cannot in my wildest dreams, imagine being chased by a moose,galloping, curious or otherwise.That thing looks huge.Beautiful scenery by the way!

Phenomenal photos! Thank you for posting them.
/vicarious traveller, saving up to self-publish! :-)

close as i am to newfie land here, i've never been... but some of my best friends are from that old rock....

That moose does look large and I'd be running if I were those people!
Lovely photos.

What a wonderful place, did you camp there? The Canadian wilderness has so much to offer in wildlife, scenery, waterways and food sources.
Great post.

Maria, this is a place I had wanted to go once, until I found out how long the ferry ride was. Looking at photos is a much easier way to travel. Unless one gets itchy feet, then you have to travel.

Michele, you're up and about. I'm really pleased for you. Glad you liked the post. It's a chore sometimes looking for just the right photograph to fit.

Cheri, welcome. Yes, the sea breeze coming ashore would be heavenly, at least in the summer.

Pam, the moose is not galloping. I looked at the photo again, and I believe Mr. Moose is only walking. They trot like horses do, so the diagonal legs would meet together underneath. This particular Mr. Moose is very large, yes indeed. He probably stands the full 7 feet tall.

Jenny Jill, welcome and thank you for your kind comments.

Tony, either have I.

Shelley, I'm certain you and your Mr. Munro would be sensible enough to stay in your vehicle.

Arija, unfortunately not. The thought of a ferry on possibly rough seas is enough to dissaude me.

Bernard, I nearly missed answering your question. There are road signs posted warning motorists about moose on the road. The figure of the cars shows a crumpled front end while a moose is staring down at it.

Actually, you wouldn't want to hit a moose if driving a tad too fast. A vehicle hitting a moose breaks it's legs, then the moose falls onto the hood of the car or through the windshield resulting in dead moose and dead passengers. I saw some insurance photos once of such an accidents -- really gross. So don't drive fast in areas where there might be moose.

Your picture posts are some of my favorite. Sometimes I steal a few and slip them into an online folder for story inspiration :)

L.A., writers need whatever inspiration they can find.

Clare2e had left a comment that I, in error, deleted in the moderated section.

"Gorgeous pictures of a gorgeous place, Barbara! Even if all the fish talk's making me hungry, I loved the hare picture. That hare has the sharp stare of an alert cat! I guess when there are so few of you, you have to learn to be pretty sly. Thanks for the armchair tour!"