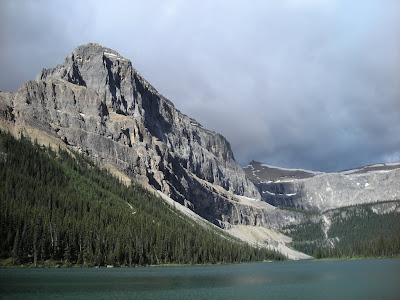 The Sawback Trail follows the rugged Sawback Range from the town of Banff to Lake Louise over a distance of 74km (about 45 miles). There are side trails to be discovered which would increase the distance.

Once at the Luellen Lake trail junction, approximately the 39km mark, the trail crosses to the east side of Johnston Creek. There the meadows are filled with willows and views of the Sawback Range to the east. 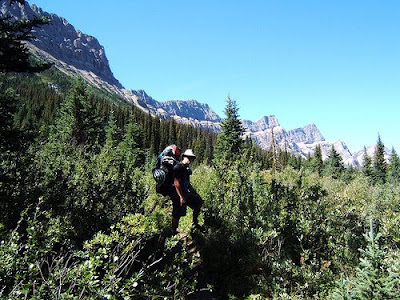 The campground known as Jo29 with ParksCanada is another 500m up the trail. This is an ideal stopping place if heading to Badger Pass and the Bonnet Glacier. No campfires are allowed at this campsite. The campground is at the base of Pulsatilla Mountain situated in a wooded area within a large meadow. If there has been recent rain there is a likelihood of mosquito swarms. 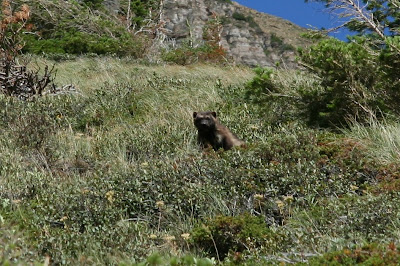 
One animal to make note of at this location is the wolverine, the largest member of the weasel family. They are secretive, and are known to sometimes steal food from grizzly bears. If startled or approached they can be quite nasty, far more fierce than any badger or grizzly. Wolverines are also considered an endangered animal in Canada. 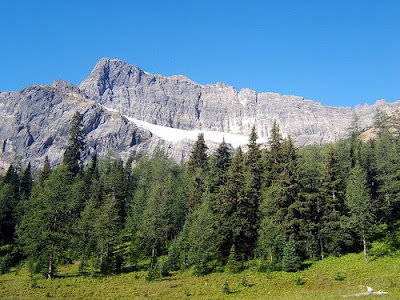 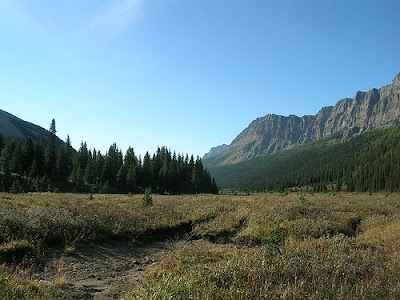 What a wonderful trail Barbara. Fantastic info on it too. Thanks for sharing.

More glorious views - I love the shapes of those mountains! They look so exhilarating.

Oh wow, I love the wolverine. I think it's my totem.

The mountains in these pictures are gorgeous, Barbara, and I love the shot of the wolverine.

Splendid post! Beautiful views and unusual looking mountains. The wolverine sounds like a scary animal to be stealing food from bears. Nice capture.

Who knew the wolverine could be so nasty?

Joan, you are quite welcome.

Phoenix, mountains are one of my favourite topics, including their shapes.

Charles, then you are one tough guy.

Teresa, I have been looking for flora and fauna to put in these hiking posts and found this critter.

Tony, there are times I feel like spraying my food too, to keep poachers from it.

Diane, wolverines tend to be scavangers though they are quite capable of bringing down deer or caribou.

L.A., considering that wolverines are quite capable of taking kills from grizzlies and cougars, and fighting off a pack of wolves tell me they are tough and ferocious. If they can mark their food (animal carcass) with their scent no other predator or bird will touch it after. Wolverines are also known as Skunk Bears, Devil Bears and Carcajous.

I've never seen a wolverine in the wild. Your pictures are fantastic. You make me miss the Canadian Rockies.

Lois, I look specifically for commons photos of animals that were taken in the wilderness, rather than use one from a zoo. The animals' behaviour is quite different as the wolverine here is peering cautiously at the photographer. You can visit here anytime you like to get a sense of the Canadian Rockies. My own posts make me homesick for them, so I'm planning a trip back hopefully at the end of summer or next year.

Wolverine fur won't freeze to your face, so it's used in snorkle-hood coats like I wore in a precious life. You can really see the saw teeth in picture 1.
Fun post for a Summer's day!
Aloha-

I wish my health (and physical status) had been of a nature that allowed me to make such a hike. It looks impressive. The picture of the wolverine was nice - I know they are not easy to catch. However, I must admit that the combination of wolverines and angry grizzly bears sounds a bit daunting... :-)

Cloudia, outdoors people who have fur to line their parka hoods would find wolverine fur helpful just as you suggested in your comment. Also fur-bearing animals like wolves, coyotes, lynx, have coats that make for good lining too. Animal rights activists may complain but there's nothing like the Real McCoy on your parka hoods.

RuneE, I am in the same state as you pretty much: my knees are shot for climbing or descending any steep distance, falling due to tripping or slipping could be disastrous (bruising), strained muscles make for bruising too. DVT puts a damper on most physical activities, but I do still go for long walks.

These hiking posts are geared for people who have a good level of fitness, though I expect there are a few who, if they take it slower by stopping at each of the campgrounds, would be able to make the loop. As I commented in an earlier post my preference would be to take one of the horseback overnight trail rides as I rode for years, while assuming the risk that would entail. (Though I expect the horses would be 'good' and not try to rub me off against the closest tree or decide it would be nice to do the quarter mile sprint.)

The mountain is always beautiful, whatever the region and season.
Barbara thank you for this sharing.

Francois, you are quite welcome.