The Sawback Trail follows the rugged Sawback Range from the town of Banff to Lake Louise over a distance of 74km (about 45 miles). There are side trails to be discovered too which would increase the distance.

Note: some of the trails are not well marked except for the main trail and the horse trail. It is recommended that hikers carry a compass and obtain the relevant maps for the areas they will be hiking in from Gem Trek . Topographic maps: 82 O/4, 82 O/5. An excellent preview map from ParksCanada on Banff National Park's backcountry trails, campsites including information on the different users of the trails can be seen here. It will help in planning your outdoor excursions. 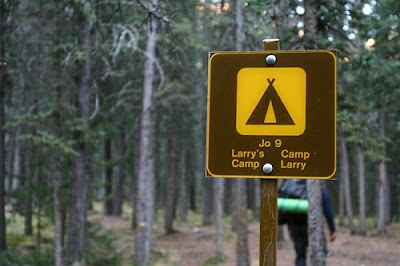 
Larry's Camp (Jo9) is located in the trees as pictured above next to Johnson Creek. There are several fire pits near the creek.

On Day 4 the hike covers a distance of about 10km after leaving Larry’s Campground at the 29.3km mark (Jo9 on ParksCanada map) to Luellen Lake. The trail is a relatively slow climb in the forest along Johnston Creek. 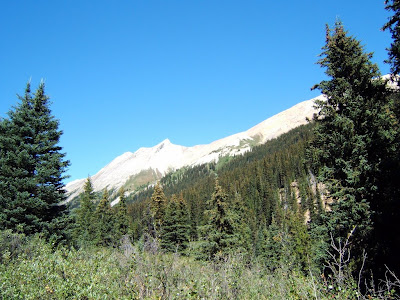 
At the 33km mark the trail passes the Johnston Creek warden cabin. 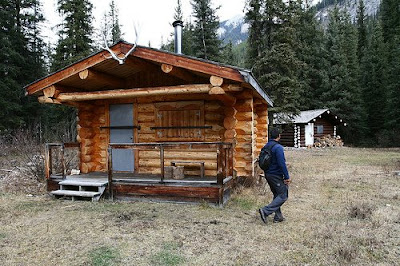 
At 37.9km the trail branches left and crosses over the Johnston Creek bridge to the west bank and campground. 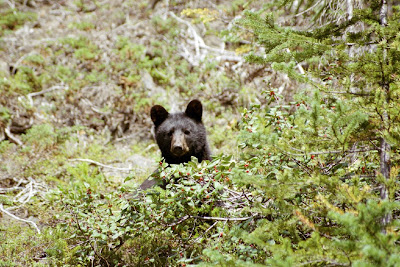 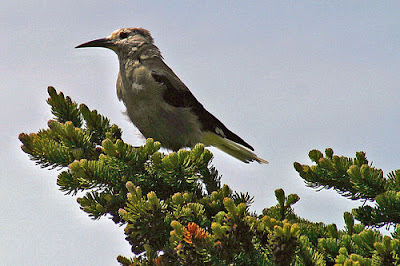 This bird is often seen around camp sites and picnic areas where it scavenges for scraps of food. Though its main food source is pine nuts.

At the 38km mark the hiker will arrive at the junction with the Luellen Lake Trail, where anglers can fish. Although the lake has not been stocked with fish for years, there are still enough for anglers and osprey. 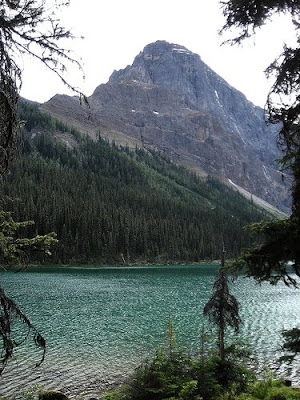 [41- Lake Luellen with Helena Ridge behind]

The Luellen Lake campground (Jo19-ParksCanada) is another 1.0km. 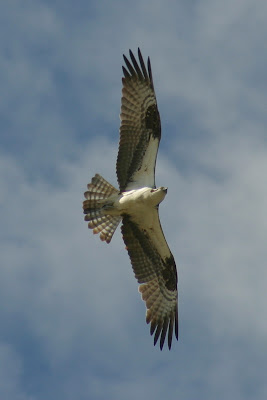 They build their nests in a tall tree or on a rock pinnacle located near water, often returning to the same nest each year. 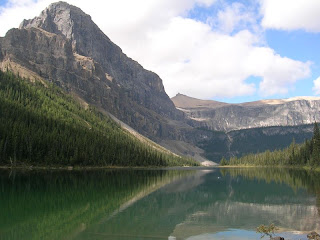 [43- Luellen Lake - click to enlarge. The mountain to the left is Helena Ridge that backs onto the rear of Castle Mountain.]


Luellen Lake is long and narrow in a forest of englemann spruce and alpine fir at an elevation of 1,985m.

This hiking trail seems really adventurous Barbara. The images choices as always are most befitting and the last one is a breathtaking view...Thomas

I love the reflection of the trees in the water on that bottom photo. Lana takes a lot of pics like that in water and I always wonder why it so amazes me.

Thomas, I have taken the outfitters trips on horseback into portions of this area as I would much rather ride than walk. Besides a horse knows far sooner than any human when predators like bears, cougars and wolves are close by. My research is quite thorough before I post any photos or materials for these extensive hikes, especially in areas I have not been.

A side hike could have been taken from Larry's Campground to the inkpots above Johnston Canyon and it's spectacular series of waterfalls, but I have decided to post that another time.

Charles, reflections in water attracts my attention too. It magnifies the beauty of the surrounding landscape, probably to dazzle humans.

every time i even see the mountains in the distance, i begin to feel like i'm on my way 'home' :)

Lia ora Barbara,
I can think of no better way to express how I feel here but to simply agree with laughingwolf.
A question Barbara, I have finally got around to gathering the apple vinegar cider and honey. Do I mix the honey in the water and cider, or just eat the teaspoon of honey, or does it matter?
Aroha,
Robb

This is such a nice post, I really enjoyed the pictures. That Luellen camp ground looks like a beautiful spot to camp. Thank you for taking the time to share. Thank you for stopping by.

I love how the sign says Camp Larry *and* Larry's Camp. Covering the bases, I suppose :)

Tony, same here, and when I dream about mountains I feel the same again.

Robb, it must be the spiritual connection between mountains and humans. I emailed you about the recipe.

Margaret, the mountains forests are a pleasant way to spend time in nature.

L.A., it's because in Canada we are bilingual: English and French -- 'Camp Larry' was the best way of putting it for the latter.