Jewel of the Canadian Rockies 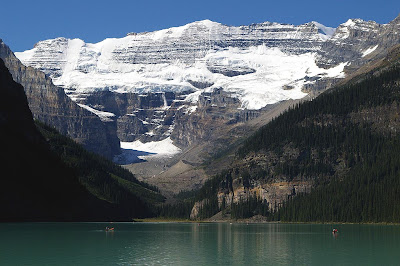 Lake Louise was first discovered by Tom Wilson, a young surveyor for the Canadian Pacific Railway, who was accompanied by two Stoney Indian companions on August 21, 1882. Tom had woken to thunder in the morning and decided to investigate the location known as the Lake of Little Fishes by his native horse packer, Eddy Hunter. After several hours of trail blazing through lodge-pole pines and aspen they came upon the sight of the lake nestled at the bottom of towering mountains and glaciers above, the sight so beautiful to the young surveyor he sank to his knees at the shoreline in awe. Tom called it his “Emerald Lake” and in 1884, Dr. G. M. Dawson, head of the Geological Survery renamed Tom’s mountain jewel “Lake Louise” after Princess Louise, daughter of Queen Victoria, and wife to Marquess of Lorne, Duke of Argyll, then Governor-General of Canada.

When Tom Wilson and his First Nations companions were at Lake Louise, the glacier extended to the lake. When I first visited Lake Louise in the mid-1950s the glacier covered almost all of the face of Mount Victoria. As you can see from this photo taken in 2008 the glacier is greatly reduced in size.

This is gorgeous, even with the greatly reduced glacier. It is sad to see such proof of global warming.

Kia ora Barbara,
Wow, that made me gasp when I enlarged the photo! I can see why he sunk to his knees when coming upon it. I can imagine the sight , and sound they must have witnessed with the glacier reaching the lake and calving bergs. Global warming is impacting our glaciers here in New Zealand in drastic reductions as well.
Aroha,
Robb

Cloudia, I have always favoured this location, and when I came across the photograph it spoke to me with the same magic I felt as a child.

Teresa, the photographer caught the sun on the mountain and lake perfectly.

Robb, Tom Wilson and his companions did witness a calving while they were there which set off other avalanches.

Late August is a good time to visit Lake Louise as the weather tends to stay warm before the first frost of autumn.

The lake is beautiful, no matter what its name is, so gorgeous and breath taking.

Fabulous snap. The contrast in colors of lake, the mountain and the snow is beautiful.

Margaret, Lake Louise is known as the "most photographed location in the Canadian Rockies" and this photo shows why.

Rajesh, the photographer has taken other brilliant photos. There is a link on the photo credit where his other photos can be viewed.

Tony, that's such a compliment considering that Jasper is your first love.

Such a beautiful lake. Thanks again, Barbara.

jasper is, but lake louise has no rival :)

I enjoyed the structure of the mountain - the horizontal lines that speaks of some violent past.

BTW, our glaciers have been reduced during this period too.

Debra, the location has charmed visitors for over a century.

RuneE, an interesting observation of Mount Victoria's past, enough so to pique my writer's curiosity.

Absolutely stunning. And definitely on my family's list of places to visit!

Also, the glaciers in the Sierras are greatly reduced as well.

I honeymooned in at the Chateau in Lake Louise and have so many wonderful memories from there, including a mini avalanche. Thank you for the special trip down memory lane ;)

Michele, there are many hikes in the Lake Louise area, some shorter, to enjoy the surrounding pristine wilderness.