My Town Monday - Conditions in the West in 1872 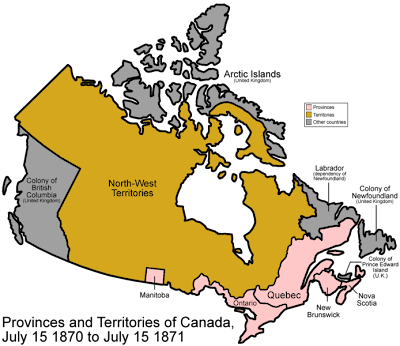 In July 1874, Samuel Steele began his trip west in service with the North West Mounted Police with the rank of sergeant-major from Manitoba. The NWMP was formed due to the state of lawlessness that pervaded from the territories of the United States to the south into the North-West Territories of the Dominion of Canada (recently acquired from the Hudson’s Bay Company). Large numbers of reckless men made their way north and did what they pleased. No restraint had been made against them with the result the Indians were in possession of weapons and “fire water” in exchange for buffalo hides and furs. The interlopers from the south moved into Canada setting up stockades as protection from the Indians.

Although the Indians’ numbers had been reduced from the effects of smallpox, they were still powerful and capable of inciting wars.

The province of Manitoba in 1873 was small, not extending more than 100 miles west of Winnipeg. The land west into the North West Territories did not have any justice of the peace. Any travel across the prairies was fraught with danger. 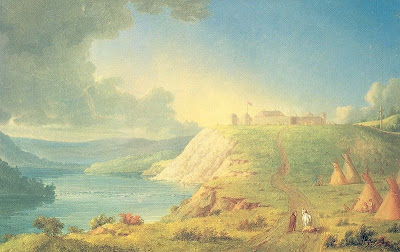 Close to Edmonton and the east slope of the Rocky Mountains the Indians were friendly. The Rev. George McDougall, a Methodist minister, had established a mission in the foothills of the Rocky Mountains. Any person traveling from the Calgary area through the country now occupied by Medicine Hat, Lethbridge, Fort Macleod, and across southern Saskatchewan needed an escort of armed men.

Prior to the formation of the NWMP the Hudson’s Bay Company posts had difficulty maintaining their trading posts south of the Red Deer River. There was continuous warfare between the tribes, enhanced by the abundance of whisky brought in by traders south of the Red Deer and South Saskatchewan rivers. When the Indians burnt down the Old Bow Fort on the Bow River, the Hudson’s Bay Company built Mountain Fort (Rocky Mountain House) to pacify the Blackfeet who were determined to keep white and red intruders off their hunting grounds. Whenever the natives met at Fort Edmonton for trade, the Crees and Blackfeet would fight, causing the occupants of the fort to close the gates until the fight was over. There were many massacres at Forts Carlton, Pitt, Edmonton, and Mountain. Any Indian who boasted of his ability to take horses and scalps was considered virtuous by members of his tribe. Wherever there was plentiful hunting, the Indians would massacre any intruder found in those locations. The Metis hunters and others of the Red River settlement never ventured west of Moose Jaw, except in well-organized armed bands.

One of the stockade posts in the west (southern Alberta) was Fort Hamilton or more commonly known as “Fort Whoop-Up” at the fork of the Belly and St. Mary’s rivers. It was well fortified with braced heavy logs with log partitions, heavy log roofs, iron bars across chimneys to prevent Indians’ access, a thick gate of oak with a small opening to trade through. Inside, the trader stood at the wicket with a tubful of whiskey next to him, and when an Indian pushed in a buffalo robe to him, he would hand out a tin cupful of the ‘whiskey’. A quart bought a horse. When spring arrived, wagonloads of the hides and furs were escorted to Fort Benton, Montana, about 200 miles south.
'Whiskey' and 'firewater' are terms to be used loosely as it was made up of the following ingredients: alcohol spiked with ginger, molasses, red pepper, coloured with black chewing tobacco, watered down and boiled.
Photos of Fort Whoop-Up here.

Travis Erwin from Amarillo, Texas is the founder of My Town Monday. For other locations to visit please go to Travis' site here.
Posted by Barbara Martin at 11:53

the painting of Fort Edmonton is beautiful--imagine how cold it would have been though!

Gary, the coldest Edmonton has ever gotten in the winter that I recall is -45F with a windchill to make it about -60F. You just bundle up and drink warm liquids before going outside.

This is a very interesting post, Barbara. I was especially interested in the recipe for "whiskey" or "firewater". I think firewater is the more apt term for it.

Teresa, I cannot begin to imagine what this stuff tasted like.

"Mountain Fort (Rocky Mountain House)" If I knew that I've forgotten it, and I live in Rocky.

I loved that Ft. Edmonton painting. I've tried to imagine how it looked in the wild. Now I can really see it.

Very interesting -- I will have to come back for the "rest of the story!"

Leah, when I prepared the post I questioned it too (this is from a comment made in Sam Steele's biography). There is a reference that the Mountain Fort was closed for a time to alleviate the tension with the Blackfeet. The history from ParksCanada about the fort at Rocky Mountain House mentions a seven year hiatus where the fort was closed to ease the tensions between the Blackfeet and the Cree-Assiniboine.

PERBS, this series will have several posts to it.

Interesting post Barbara! I hope that the Indians and white Canadians are on "speaking" terms now and treat each other as equals. In Australia it has been the same.

The painting of that fort is so beautiful Barbara, Its amazing how you make your image choices...Thomas

Lovely post, Barbara. I'll be back to read the rest.

Wil, there are still disputes about 'land claims' and 'treaties'.