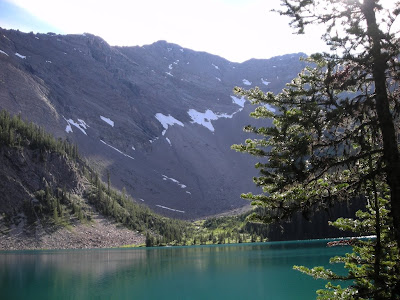 The Sawback Trail goes from the town of Banff to Lake Louise following the rugged Sawback range over a distance of 74km (about 45 miles). Many hikers take this as a four to five day hike, although this series of posts will reflect a more leisurely hike with frequent stops. There are campgrounds in convenient locations to allow the hiker to stay an extra day to explore other trails that branch off the main trail. I should note here that some of the trails are not well marked except for the main trail and the horse trail. It is recommended that hikers carry a compass and obtain the relevant maps for the areas they will be hiking in from Gem Trek . Topographic maps: 82 O/4, 82 O/5.

On Day 3 the hike covers a distance of about 10.6 km with the trail leaving the Mystic Lake campground at the 18.6 km mark. For the less fit hiker this is an adequate distance due to the rugged terrain covered.

After walking the 0.5km to return to the main trail where it climbs for another 3.6km until Mystic Pass is reached at 22.7km (2285m). Be warned that snow can remain on the pass until well into the summer. 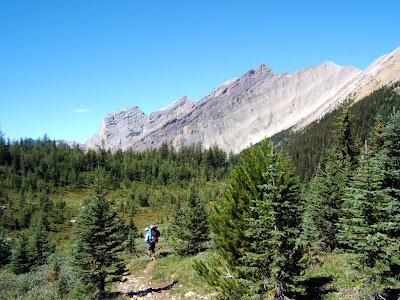 
As a reminder where visibility is poor please make noise to alert any bears that may be in the area. This will allow them to move away. Groups of three or more hikers are less likely to be charged or attacked by a bear. 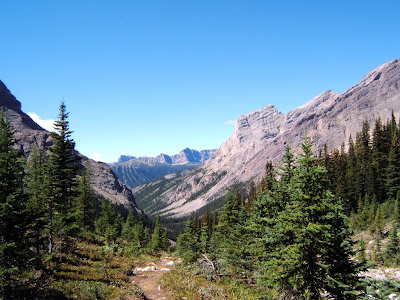 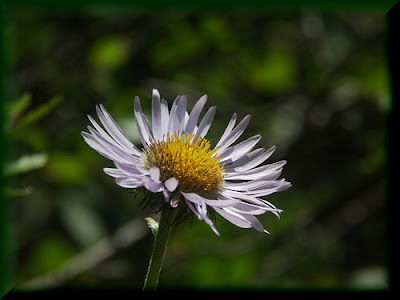 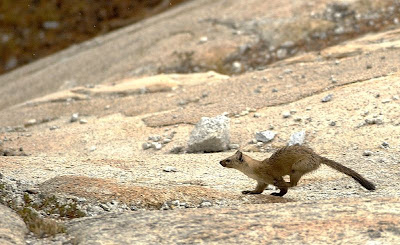 Pine Martens belong to the weasel family. They can be sneak thieves around campsites. 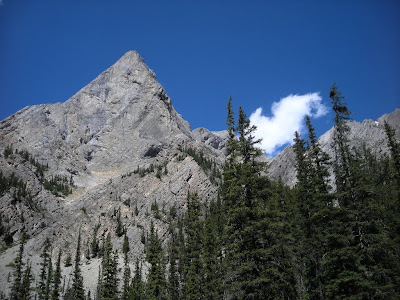 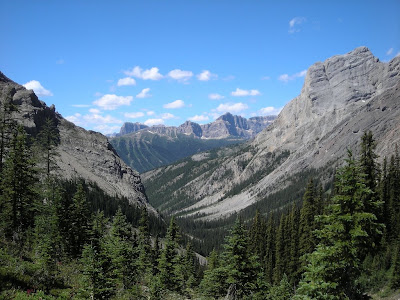 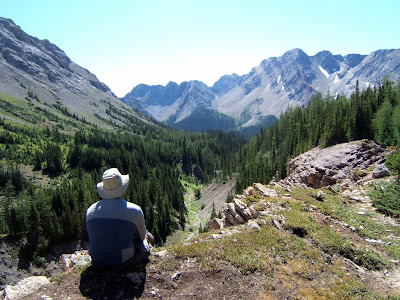 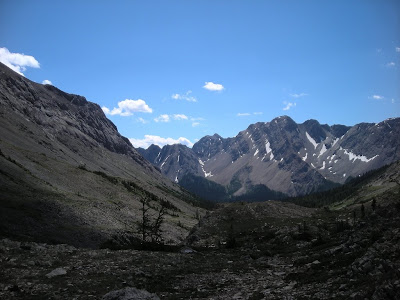 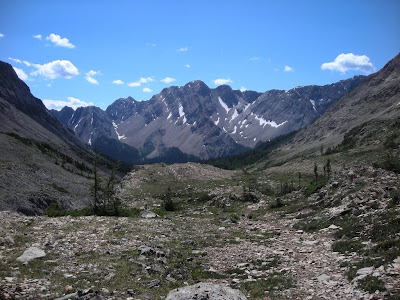 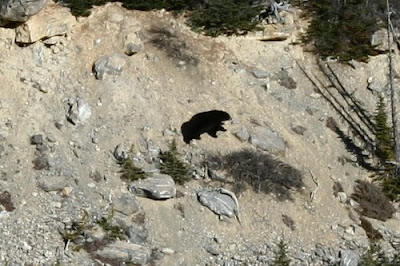 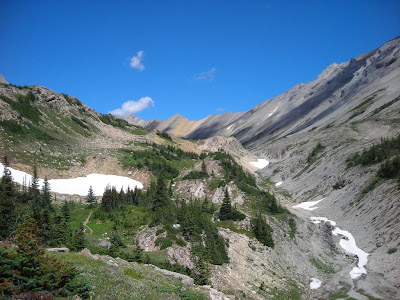 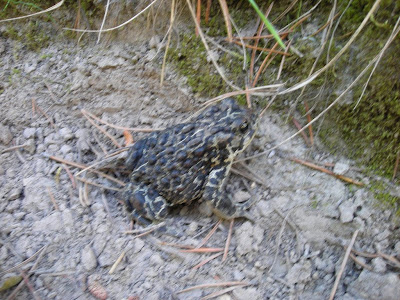 
From Mystic Pass to Larry’s Campground (Jo9 on map below) the distance is approximately 6.5 km.

Care must be taken as the trail descends steeply from Mystic Pass with the hiker traversing rockslides, avalanche paths, and passing waterfalls. 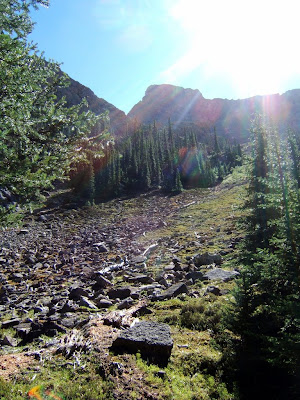 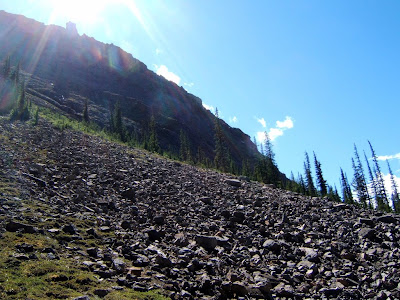 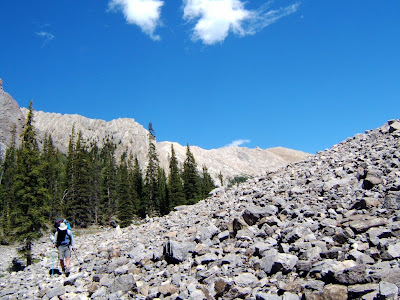 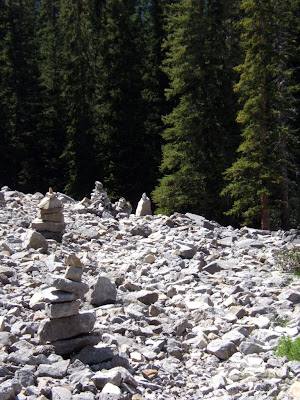 [31 - Cairns mark the way on rockslide - click to enlarge] 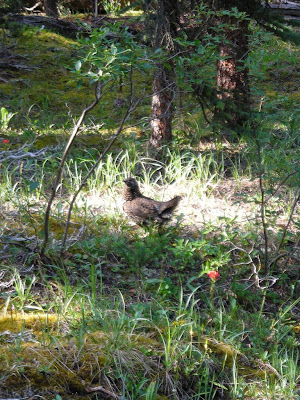 [32 - Pheasant - click to enlarge]
The photographer called this bird a pheasant though it looks like a grouse to me. What kind of bird do you think it is? 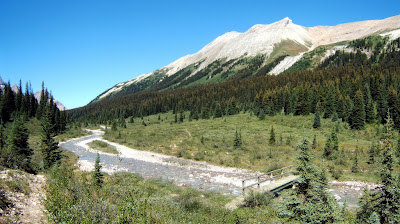 
At the bottom of the valley after crossing over Johnston Creek is the junction to Larry’s Campground (Jo9) at approximately the 29.3km mark with an elevation of 1680m. Keep right to remain on the Sawback trail.

The opposite direction leads to Johnston Canyon and Moose Meadows should the hiker wish to end the hike here; though next week the Sawback Trail continues on to Lluellen Lake.

The campground is beside Johnston Creek in a forested area, where camp fires are permitted.

At the campground this little visitor is certain to appear. 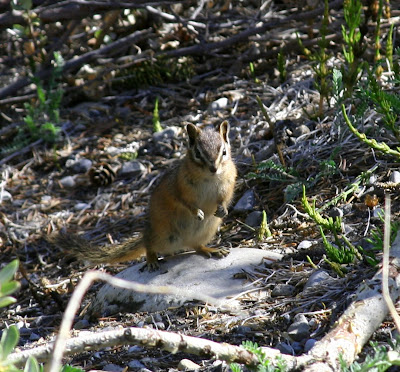 
Several of the photographs in this hiking trail series are those Mike Warren took. He is an avid outdoorsman and took the time on flickr to provide information on the type of food he takes on his mountain excursions. The following is a list of food ingredients to pack on a spring traverse consisting of 7 nights and 8 days: 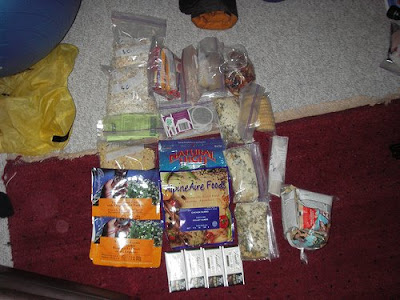 
I would add dried figs to this list as they are almost a perfect food and easy to carry.

I really love the pictures today, Barbara, especially all the wildlife photos. I agree that the "pheasant" looks like a grouse, but I am not an ornithologist.

What a wonderful name - Mystic Lake! And Mystic Pass too.

Teresa, I will be looking for photos of other inhabitants of the forests and mountains for subsequent posts.

Phoenix, perhaps Mystic Pass is some sort of metaphysical corridor that sends unwary hikers to another world or place.

You're inspiring me to get out there and explore the wilderness again, Barbara! It's been way too long since my family and I have hiked around the Sierras and the Rocky Mountains. How often do you get the chance to go hiking?

Michele, exercise is great to clear the cobwebs from the senses. It rejuvenates a person to enable them to go back to the corporate world.

Now that the weather has finally warmed up, I will be going to the Bruce Trail on weekends a couple of times a month, and taking long bike rides along Lake Ontario on the paved bicycle trails to get those flabby leg muscles in shape.

Wonderful pictures. What a fantastic place. I would need a few milky ways on the food list.

Cloudia, you should post about hiking trails on Waikiki. There are some pretty rugged places near Diamond Head.

Food for seven days? Hum, I suspect it might last me 2.

Charles, I would be so tuckered after the first day that I would only be able to eat small amounts before I fell asleep on my feet. The boil in a bag ones look fairly large with rice, dried veggies and meat, so that would satisfy well. Warren has alot of snack foods there to eat on the go to keep one's energy levels up. He's got everything neat and tidy for when it has to be up in the bear cache.

I like how you included the flower and wildlife photos as well as all the beautiful scenery pictures. I agree with Charles that it doesn't look like much food. But then I've never gone backpacking so I don't know if I'd want to carry more than what you packed. Great post, really enjoyed it.