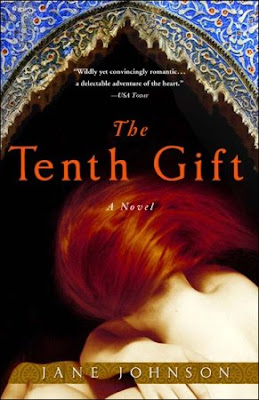 Based on a true family tale, Jane Johnson weaves an intricate story of two women connected across the centuries. The story encompasses a blending of genres: literary mystery, historical adventure, romance and the supernatural.

The story begins with Julia Lovat meeting her lover in a London restaurant and receiving a farewell gift from him. It is a book of exquisite 17th century embroidery patterns belonging to a woman named Catherine Ann Tregenna, aka “Cat”. Later, upon closer examination, Julia finds the book contains faint diary entries in tiny handwriting. The story of Cat, an embroideress and ladies’ maid who yearns for adventure in 1625, is being forced to marry her cousin Rob whom she feels only ‘brotherly love’ for. While she is bemoaning her fate in a Cornish church, she and 60 others are taken by Barbary corsairs, and shipped to Morocco to be sold as slaves. Cat’s ability to embroider is considered a valuable commodity and coveted in the Islamic world.

There are memorable episodes on the voyage to Morocco that set the historic era: the horrific treatment of slaves in the hold, encounters with other ships, and Cat’s tending of the captain after stitching up his wound.

Suffering from her separation from her ex-lover, Julia immerses herself in the captivating story of Cat. She decides to go to North Africa to determine the authenticity of the book while picking up Cat’s tale after the slave auction where it abruptly stops. Once there, Julia finds herself experiencing the sights and sounds of the spice markets, sultry heat, ancient ruins, accompanied by a charming Moroccan guide and discovers secrets about herself and Cat.

The story moves between the centuries with ease, providing just enough information to keep the reader engaged and wanting to know what happens next. Ms Johnson wove historical fact throughout the narrative, explaining the viewpoints of two cultures: British and Moroccan in their specific timelines. She also does a deft job with the supernatural aspects.

I found it difficult to put down and found myself reading into the early hours of the morning. This is a book I would recommend to anyone looking for an engaging story.

Thank-you Barbara for an introduction to The Tenth Gift. I am sure that I and friends of mine who enjoy embroidery would like this book. One, who is a bellydancer and talented textile artist, has a favourite shop in our town which specializes in Moroccan wares.This book seems the perfect birthday gift for her.She is an avid reader and would love, I am sure, "moving through the centuries with ease". You've solved my gift problem!!

You said, I would read it too!!!!!!!!
Not sure when I am gonna get to TO, but we are headed to Niagara on the Lake Saturday!!

I loved this book, too, Barbara. It is an excellent story.

Pam, I liked the way Ms Johnson provided historical information in her narrative about the political environment of the 17th century.

Gary, then you should visit Fort George.

Teresa, this book has been getting rave reviews from most readers.