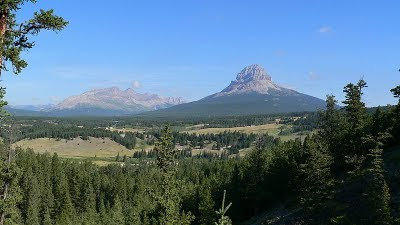 Crowsnest Mountain, 2,785m (9,137 ft), is located in southwestern Alberta close to the Crowsnest Pass, the lowest pass through the Canadian Rockies. It was given its name by the local Cree natives due to the large number of ravens that nested there.

The Crowsnest mountain was first climbed by Tom Wilson on July 28, 1904, accompanied by two Swiss guides, Christian Hasler, Jr. and Frederich Michel. The trail to the top of the mountain is considered a moderate scramble, although Trailpeak.com lists it as moderate-difficult.

The photo is taken from the Star Creek Falls trail near Coleman, Alberta.

I love the shape of the mountain top. Personally, I think it would be more than a MODERATE scramble.

Teresa, I think it would depend on who was going up top. For me, I would never go, because once I climb up on something high I have a great deal of difficulty getting down. This started with trees in childhood, progressing to neighbours' garage roofs and hay lofts in barns. It becomes embarrassing to ask for help to get down. I tend to stick to trails that have little or no surprise drops.

A moderate scramble must be the understatement of the year...

Has it ever been a volcano?

I used to love climbing. Haven't done it in years. Way to out of shape now.

RuneE, never a volcano, but made up of limestone. The top portion of rocks are older than those on the bottom. There is conjecture whether it was flipped or glacial movement pushed rock and earth on top.

I never had an interest in climbing but I may make an exception here. Striking beauty and interesting history.

I'm looking at a mountain through my hotel window as I type this. Maybe I will go for a climb... maybe not.

Simply beautiful! I'm green with envy at this view!

This doesn't look familiar to me, and I've been through the Crowsnest a few times.
Meanwhile, I'm sure the average mountain goat would call it moderate.

David, if you go please tell someone where you're going and how long you'll be away.

I cannot imagine climbing a mountain. It must give the climber an incredible sense of accomplishment.

I did mention I was traveling for work in two earlier posts. But I should be back blogging now for awhile.

And I'm currently in a beautiful country called Montenegro. Pictures coming when I get a chance.

Gorgeous. I love catching your pictures during the week.

Beautiful. I just have to see the west sometime.

Barrie, one does not have to go all the way to the top. There's a nice hike up the side of Castle Mountain just before the scrambling starts, and this poses interesting scenery above and below.

David, I took your initial comment about you going to climb the mountain outside your window, and responded to that. I do know you are flitting about the country on various work schedules.

Hagelrat, I'm glad you like the photos I choose.

Hi Barbara! This is more than a moderate scramble, for me it's an enormous climb and the mountain is impressive. I bet it is a volcano! At least it has the shape of a volcano.

That is way different than the mountains around here! Fantastic.

Alberta is such a gorgeous province, isn't it? I suspect everything there is photogenic. ;-)

I have never climbed a mountain, Barbara. Like you, I think I might have an easier time going up than coming down!