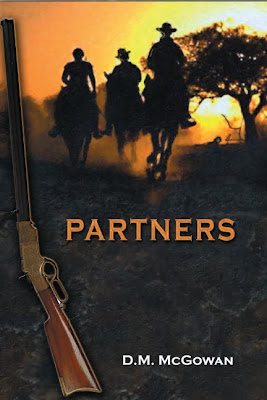 The story opens in 1866 with Thomas Brash traveling across the southern portion of what will become Saskatchewan in western Canada, leaving behind painful memories of the loss of his wife and children to cholera. During Brash’s journey, he encounters a youth, Frank Clement, who has left his own tormented life behind. The two men are opposites of each other: Brash, educated soldier and well spoken, and Clement, rash, expert marksman, illiterate, with an ability to survive in the wilderness. Through the contrast of their characteristics they form a tenuous partnership to travel in the North-West Territories, prime Blackfoot country whose violent reputation is well known.

It is through this partnership after witnessing the murder of two aboriginals, and the diplomatic means Brash uses to form an alliance with the Blackfoot tribe run by the warrior chief, Red Shirt, that the two men come to understand the benefits each provides the other.

As western stories go, The Partners provides a good foundation in the history of early Canada. I particularly liked the intricate details with the Blackfoot Confederacy in comparison with other First Nations, the descriptions of the land and culture differences in the time period. There is an incident about two-thirds of the way into the book where Brash uses a military tactic to offset the approach of the U.S. Army after they cross the medicine line (49th parallel) into the North-West Territories. A brilliant plot piece: loved it.

Mr. McGowan has excellent knowledge about the early history of Canada which is revealed in each page. The story moves well with progressing conflicts that are solved relatively quickly or a little later on. I recommend this book to anyone who wants an entertaining excursion into the past.

Available at:
Amazon.com
Chapters.Indigo.ca
Posted by Barbara Martin at 23:05

Thanks for the book review, Barbara. It sounds like an interesting book. Unfortunately, my reading wish list extends into next year already.

Teresa, you can always tack it on when the list dwindles. The history would be worth it.

Thanks very much for the review, Barbara. The big things for me are entertainment and history. I'm realy pleased you saw both these. I hope you my other work can continue to do as much.
Dave