[1-Vancouver as seen from the seawall at Stanley Park]


Stanley Park is located in the City of Vancouver, British Columbia containing an estimated half a million trees. It is slightly larger than New York City’s Central Park.


During childhood family trips, every couple of years, we would head through the Rockies via the fruit belt in the interior of B.C. to the coast where my parents would visit relatives and old friends. For my older brothers and I, there was the anticipated freedom of exploring Stanley Park and returning to the campsite for dinner. This was back in the day when it was relatively safe to allow children off on their own. Though I think there were times when my brothers considered leaving me lost in the bush to rid themselves of a pesky little sister.

There are several trails through the forested area leading to a variety of beaches and interesting sights such as the Western Red Cedars. 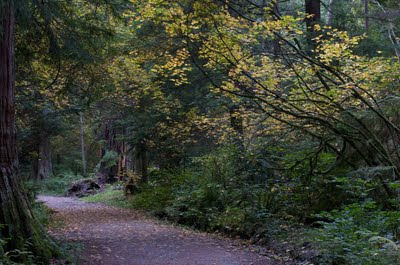 
Until 1994 there was a zoo. There remains a children's zoo of barnyard animals and now a renowned aquarium. A favourite spot of mine is the collection of totem poles. 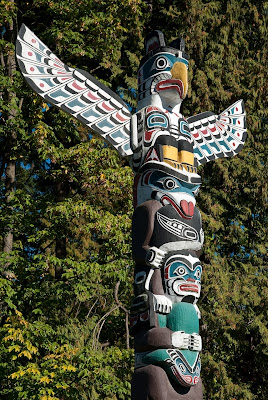 [3-One of several totem poles]


An 8.8km (5.5 mi) seawall circles the park which joggers, cyclists, skate board enthusiasts and walkers enjoy. 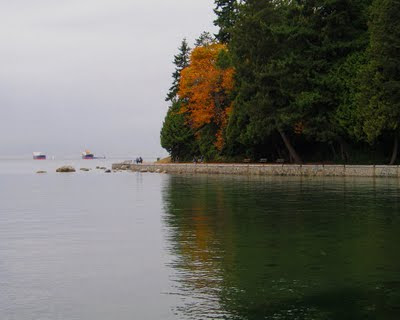 [4-Seawall at Stanley Park with benches]

For more information about Stanley Park visit Wikipedia and SeeStanleyPark.com.

You figure everybody wants to move to Vancouver, gorgeous!
BTW, you were correct, there Missasauga rattlers in NY. Not my neighborhood luckily!
You people in Ontario: you send us your SNOW and now I find out rattlers too? :)

The view from the seawall is simply stunning!
I would love to sit under those treas by the seawall, watching the leaves fall.


May you enjoy a wonderful autumn weekend! :-)

Gary, you are funny today. We do not send you SNOW...we didn't get any snow, well, at least where I live there isn't any snow. The rattlers are in the general neighbourhood of the Great Lakes, so everyone can share them.

Barbara, we used to drive up to Stanley Park every spring because my brother's soccer team participated in a US/Canadian soccer tournament that was held at the park. My dad had cousins in Vancouver, and we would usually stay with them. I loved the totem poles, too. And I loved the zoo and the aquarium. Stanley Park definitely gave me many good childhood memories!

A city on the sea. ALways something neat about that kind of image.

Very cool. I've never heard of this park but seems like a great place.

For some reason, virtually every Canadian I meet in New Zealand is from Vancouver. With such a lovely city, it's hard to figure why they'd ever leave...

Kia ora Barbara,
What a stunning place, and so great to have those memories of such a fantastic park. A beautiful city I regret to write I never got to visit but certainly appreciate a virtual tour. Cheers my friend.
Aroha,
Robb

Travis, there are many things to do in Stanley Park for singles or families.

Steve, some just have travelling genes. I do, though I plan on returning home eventually.

Robb, I have many fond memories of Stanley Park, Vancouver and area from my childhood and later years. There is a plethora of hiking trails in and around Vancouver that would make any outdoor person's heart sing.

I hope to see this for myself someday.

Some fine photos here, Barbara. I love that totem pole in particular. And good on you for telling that Gary guy that WE didn't get any snow like HE did! Just don't tell him the name of my city or he'll blame me for snakes too!. ;)

Leah, Vancouver is a beautiful city.

Hilary, you should pop over to Gary's blog to see the awesome pottery he makes and sells.

Not to worry, Barbara. I'm a regular over at Gary's place - as he is at mine. I just like to remind/tease him that not all snow comes from our side of the lake. ;)

The park sounds beautiful. Half a million trees. How wonderful.

Can you believe I've never been to BC!

Leigh, trees helping to clean the air and give peace to the human visitors.

Barrie, you could go for your next holidays. Closer than TO.

I have been to Stanley Park and admired it greatly.

Barbara - Beautiful and as always comprehensive post on this park.