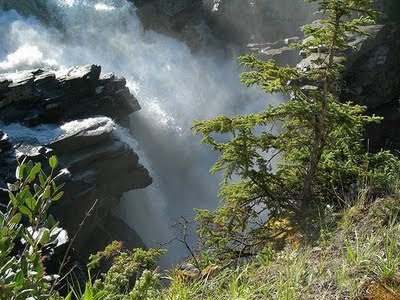 The Athabasca Falls are located in Jasper National Park, Alberta just off Highway 93. The waterfall itself is only 23 metres high, but it is known for the amount of water that rushes down the narrow gorge. The water in the Athabasca River comes from the meltwater of the glaciers in the Columbia Icefield. 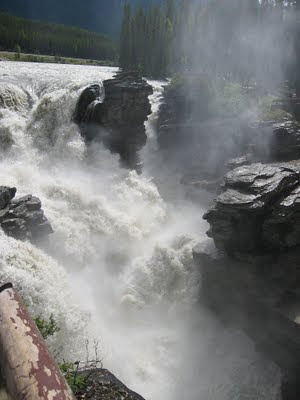 In the photo below, the mountain in the background is Mount Kerkeslin at 2984 m (9791 ft), named by James Hector when he traveled up the Athabasca Valley in 1859. At the time the mountain was named, Hector had been hunting a wolverine whose name by local aboriginals is “ker-kes-shu”. The notation had been made in Hector’s journal for the January 22, 1859 and February 14, 1859 entries. 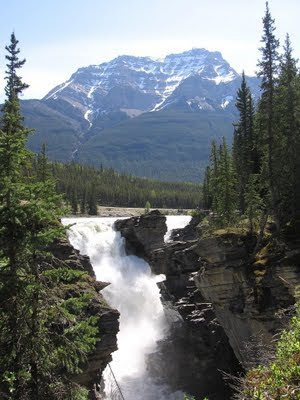 
I have been to these falls many times since childhood on family camping trips and later as an adult. They never fail to fascinate me with the amount of water that goes rushing down through the gorge. Every time I return there are stacks of rocks that are often washed away from the force of the rushing water.

UPDATE: A video depicting very foolish tourists at the Athabasca Falls. I had commented on this in the comment section.

Kia ora Barbara,
Thank you for sharing this intimate place with us. How wonderful that you know it so well, can see the changes which continue to happen as Nature does her busy work there with such intense power and focus. I too could stand there for hours just listening and watching.
Aroha,
Robb

Josh, a perfect place to rest the soul.

Robb, there was a time in the late 1950s into the 1960s where the rock stacks were closer together, and the odd fool would go out onto these water slicked rocks. A particular ledge on the left side of the falls slowly wore away underneath. One day another fool was out on the ledge and ended up swept away into the gorge as the rock collapsed.

There are a couple of other incidents that occurred in the Rockies during my childhood that I will relate later. They stick in my mind because of the tragedy when common sense could have prevented these accidents.

Thanks for the beauty break, Barbara. It made my day!

waterfalls are so fantastic - there was one in Wales we visited on three successive Easters.

Those images have captured the ferocity of this waterfalls beautifully.

Goodness. This looks like the one Sherlock Holmes tumbled down into. Or did he?

Hello, I came here for the bench of yesterday, and I comment here to be sure you'll find my comment..
The yesterday's benches are interesting, located in a particular place and with a rich story behind..
And your pictures today are simply letting me breathless..I understand your constant fascination!

Amazing how much work that water can do over time. It's so easy to see how much time must have passed in places like the Grand Canyon if you really pay attention to the processes involved.

Teresa, you are more than welcome. I especially like waterfalls of any kind as they have a way of providing peaceful moments.

Gerald, I love the sound of running or roaring water.

Thomas, the first two photos show the power in the water which drew me to them.

Pamela, I have no idea whether Sherlock Holmes even fell into a gorge, though unlikely to be this one in western Canada.

Malyss, I have a particular fondness for these falls.

Charles, with the Grand Canyon I imagine it would take centuries for the river to carve through the rock down to a mile deep and ten miles across in some places. There are many places in the world where fast running water has created deep gorges.

Waterfalls are so majestic and compelling.

Saturn is going to be my task master? Yikes, sounds scary!!

Willow, waterfalls have that reputation when large.

I love this spot. Even the sound is gorgeous.

Leah, we are kindred spirits where mountain areas and running water are concerned

What a beautiful area.. just amazing. People are nuts though.. the stupid chances they'll take.

This is truly a beautiful place but I haven't been there for a very long time. Thanks for the memories!

Hilary, I believe some people don't think things through before they step out onto rocks near a gorge. It was a fluke for me to find this particular video. Almost a case of synchronicity.

EG, I try to relive my memories as much as possible. Soothes my soul.

Hi Barbara, Great capture, love the second shot... one can feel the power of mother nature nature from that shot... amazing

Was wishing there was sound to go with your beautiful photos, then the video came up. Roaring water is not something you hear in South Australia. Enjoyed the whole experience, but can't believe the carelessness and misguided bravado of the tourists.

Samson, I look for photos that seemingly speak to me, and these ones do the trick.

Pam, they say that the divine creator takes care of fools and children. I tend to stay away from edges and dangerous drops as all it takes is one misstep.

Beautiful pictures of waterfall. I love them, they are with so much light.

A few days late sorry. I love the Athabasca Falls, the force of water is so amazing. I often wonder what possesses people to make them climb a fence in order to do dangerous crap like that.

Chris, Alberta where these falls are located is known to have many sunny days. Perfect for taking photos.

Reb, not to worry, come any time. When I was a child there weren't any real fences apart from the bridges crossing the gorge. It was assumed people had common sense, but there are still those who like to defy the odds.

Steve, happy to oblige you.

What a waterfall. It makes the Niagara Falls look almost tame in comparison. I watched the video and kept wondering if the tourist was going to fall.

Marian, Niagara Falls has many more metric tons of water going over though over a wider area. The force of the Athabasca Falls comes from the drop through the gorge, and is at its most powerful in June and July.

The scene in the video made me think it was later in the season as the side rocks where the tourists were had little water on them. Though the person on the stack must have hopped over.

The falls' incredible power is obvious even in the still photos. How beautiful!