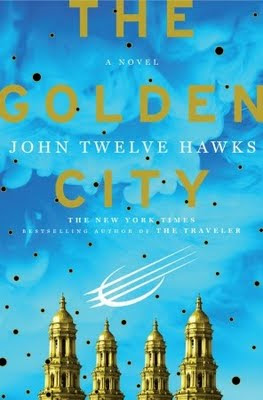 A riveting blend of high-tech thriller and fast-paced adventure. Packed with knife-edge tension, intriguing characters, and startling plot twists that will keep you turning the pages.

In the Fourth Realm trilogy, John Twelve Hawks introduces readers to a dangerous fantasy world inspired by modern technology that monitors our lives. The suspense series concludes in this powerful third novel, following the entire cast of this mesmerizing world that exists in the shadows of our own. Maya, the Harlequin who has pledged to protect Gabriel with her life, will face a situation from which there is no escape. Nathan Boone, the cold and calculating executive of the Brethren, will face Michael, a man who has gone over the edge for power. Hollis, living in grief and becoming a Harlequin himself, will have to choose whether to stay with Gabriel as he embarks on a journey that may lead to his own death. Publishers Weekly hailed the series as “a saga that’s part A Wrinkle in Time, part The Matrix and part Kurosawa epic.”


Although The Golden City is listed as a fiction book, in truth, it has multiple genres: fantasy with religious tones, science fiction, adventure, and thriller elements. The story involves a complex plot and setting with intriguing plot twists. This is the third book in the Fourth Realm trilogy, following The Travelers and Dark River.

Gabriel Corrigan, a Traveler, has opted out of the government system that keeps tabs on him by working with the Resistance. His vulnerability lies in Maya, the Harlequin, who has sworn to protect him. His twin, Michael Corrigan, has joined the Bretheren, whose sole purpose is to control the people of the planet while searching for the elusive Travelers. However, Michael is secretly working on his own agenda, to take over Nathan Boone’s position. Gabriel and Michael inherited their traveling ability between realms from their father.

A secret organization in the U.S. known as the Bretheren has different high-tech sensors to keep control of the population. There are a few small groups who oppose the control policy and they “live off the grid”. They are known as the Travelers, with a unique ability of being able to break through the light barriers to travel to other realms which are parallel realities. To cross over into another realm through a portal, a Traveler must pass four barriers: fire, water, earth and air. They are often accompanied by and have protectors called Harlequins.

The government runs an advanced technology known as the Vast Machine to keep track of the citizens through surveillance. They are searching to locate any Travelers to increase their own power by contacting the citizens in other realms.

Gabriel and Michael Corrigan race to reach the realm containing the Golden City where they intend to confer with the gods to be given power. What they find is not what they expected.

The story has intriguing elements to it like traveling to the other realms through portals which I would have liked to read more of. I had some difficulty in the beginning as this is the first of the trilogy I have read. The glimpses into some of the characters’ past experiences in previous books were almost non-existent which produced gaps. However, after finishing this book I now want to go back to the first books and read them. When going to John Twelve Hawks website I found interesting explanations about the other realms in the world he has created.

The author John Twelve Hawks leads a very private life where “he lives off the grid”. He has written a book to make the reader take another look at what goes on around them.

Amazon.co.uk
Posted by Barbara Martin at 11:19

This book sounds really fascinating, Barbara. Thanks for sharing with us.

This sounds good! I'm also intrigued by the description of the author as 'lives off the grid'.

Teresa, I found much of the story to be to my liking.

Charles, I really like the multiple genres as it tends to keep the story interesting and moving forward.

Raph, apparently 'no one' knows the real identity of John Twelve Hawks. He has done some interviews which are on Wikipedia. The first book, The Travelers, was a best seller. In it is mentioned about all the cameras Britain has on its roads and street corners for the protection of its citizens against violence and terrorism. Though England has had cameras on its street corners prior to John Twelve Hawks having the first book published. He's written on a topic to make people more aware of their surroundings rather than go along in life like a sheep.

I must make sure to read your review of An Echo in the Bone as it's on my TBR list. AND I will not tell my dh about John Twelve Hawks. Dh is determined to live off the grid and drag me with him.

Barrie, there are pros and cons to living 'off the grid'. It all depends on where one's viewpoint is.

hello, what is the symbol on the hardcover of "The Golden City"? it kind of looks like the Euro currency..