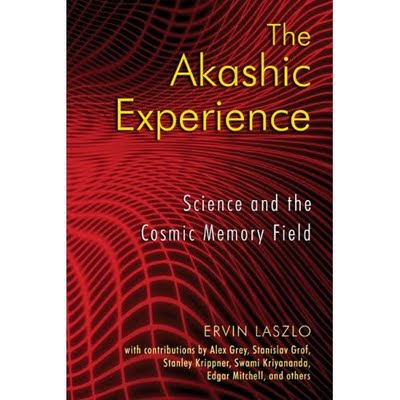 From the Back Cover:

“SCIENCE / NEW THOUGHT
Knowing or feeling that we are all connected to each other and to the cosmos by more than our eyes and ears is not a new notion but one as old as humanity. Traditional indigenous societies were fully aware of nonmaterial connections and incorporated them into their daily life. The modern world, however, continues to dismiss and even deny these intangible links--taking as real only that which is physically manifest or proved “scientifically.” Consequently our mainstream culture is spiritually impoverished, and the world we live in has become disenchanted.

In The Akashic Experience, 20 leading authorities in fields such as psychiatry, physics, philosophy, anthropology, natural healing, near-death experience, and spirituality offer firsthand accounts of interactions with a cosmic memory field that can transmit information to people without having to go through the senses. Their experiences with the Akashic field are now validated and supported by evidence from cutting-edge sciences that shows there is a cosmic memory field that contains all information--past, present, and future. The increasing frequency and intensity of these Akashic experiences are an integral part of a large-scale spiritual resurgence and evolution of human consciousness that is under way today.”

Einstein’s theory of relativity had been seen by scientists and physicists as a four-dimensional space time reality, while refusing any other explanation or theory that there might be another kind of energy within the space-time. Today it is accepted that there is a concept of an underlying dimension within the universe. This medium carries information while manifesting things and processes within the universe. It is through this medium of the Akasha that humans are connected to one another, the world and the universe.

The Akasha contains records of the wisdom of the ages, a type of collective knowledge encoded in a non-physical plane of existence. These records contain all of the knowledge of human experience and the history of the cosmos. There are philosophists, psychics, mystics and Reiki practitioners who are aware of the Akashic records and are able to read them in certain states of consciousness. The late American mystic Edgar Cayce was successful in reading the Akashic Records which he described as a type of library of a collective consciousness. This Akashic library contains every thought, word and action in the universe to which every life form contributes. For Christians the Akashic Records are known as the Book of Life as described in the Bible.

Akasha is the Sanskrit word meaning ‘sky, space or ether’, the term Akashic Records comes from Hinduism and is incorporated into theosophy as a meaning of a collection of mystical knowledge. According to the Hindu seers a cosmic source known as Akasha is the first of five elements while containing the memory of everything that has occurred in time and space.

Laszlo describes how the human brain has the ability to receive and exchange information from quantum-hologram fields. It is perceived that the human brain receives information from waves in the universe to which it is entitled. The brain does not receive everything but only that information for which it is encoded. Experiments have been conducted to show that several people are able to communicate through the Akashic field at the same time resulting in “shared dreams, common hunches and related insights”.

I recommend this book as invaluable to anyone who explores the areas of metaphysics and spiritual healing, as it has examples of “soul retrieval” during past-life regression, remote viewing, near death and out-of-body experiences, premonitions, communication with the dead and others; resulting in a new awareness of the cosmos.


ERVIN LASZLO, a leading systems theorist who was twice nominated for the Nobel Peace Prize, is editor of the international periodical World Futures: The Journal of General Evolution and chancellor-designate of the newly formed GlobalShift University. He is the founder and president of the international think tanks the Club of Budapest and the General Evolution Research Group and the author of 83 books, translated into 23 languages. He lives in Italy.

Great review, Barbara. This is another one for the reading list and one I definitely plan to read when papers and mid-terms are over.

This IS a great review, Barbara!

Great information. As a REIKI practicioner, I may not fully understand, but it is a simple fact that distance healing works, and that information comes without the senses.
Aloha, Friend!

I definitely think of myself as the science type, but I try to have an open mind. I believe there is much we don't understand about the nature of the universe and our own nature, but I don't think anyone really has the answers yes. I'll have to check this book out and see what I think. Good review.

I really must read this book, Barbara. It sounds very sensible.

Information about the Akashic field will spread to more people now that reputable professionals have reported their own experiences.

On my list of books to read. Thanks for the review. I feel free from the shackles of blind faith and understand the crux of the old sages'/seers' wisdom. This kind of book seems to be a good guide.

Ultimately, our souls are not branded or stamped with labels and we're all interconnected, i.e., it's all one cosmic 'dance'. And my gut says that has always been the essence of all wisdom.

Chakkar, welcome. Religion does not enter into this cosmic interconnection. We are all meant to work together to achieve unity while growing in our own soul lessons.

It's very good! Although the Christians do not believe, therefore they pray "now and in the hour of our death amen", the death does not exist; but a mutation of the body, to the pure energy.

Allmirante, welcome. Please do not lump all Christians together in your assumption. Being Christian, I believe in the Askashic experience as I have had many of them.

There is death of the body which has been a vessel for the soul during a lifetime, but the soul itself rises in energy form to accompany the angels and spirit guides that are there to receive it.