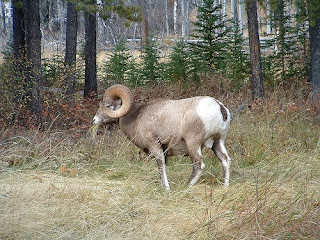 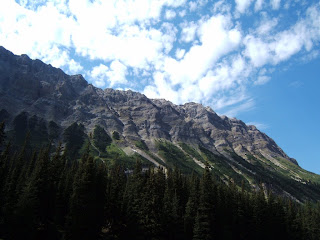 [98-Anthozoan Mountain, 2695m (8842 ft) was named in 1925 for the fossilized coral found in the Devonian limestone of the mountain - click to enlarge]

Due to the possibility of trail deterioration after leaving Wildflower Creek campground it is advisable to stick to the marshy meadows below the east ridges of Anthoazoan Mountain.

The trail then climbs through forest across avalanche paths along a rough trail on the east side of the creek. 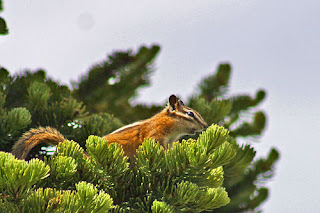 Approximately 2km later the trail enters boggy meadows where the hiker should be prepared for mosquitoes. At the north end of the meadow the trail crosses a side-stream and rocky area, followed by a short steep climb on a rough and muddy trail. Above is an alpine meadow with the trail crossing to the eastern side of the creek. 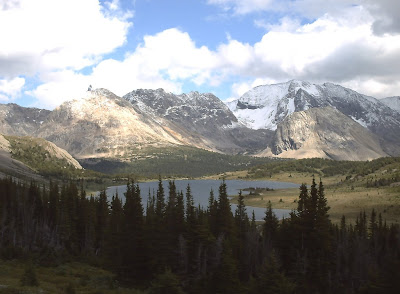 At 58.9km mark turn left at the Junction to Deer Lakes for the trail to Baker Lake. 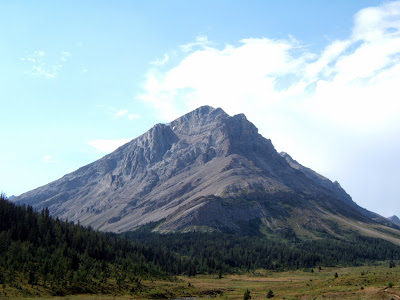 
At 59.9km the Baker Lake Campground (Sk11) is in a treed area, but Baker Lake itself lies in marshy meadows. This campground has a notorious reputation for camp robbing wolverines. 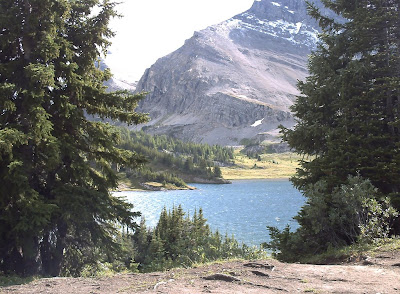 There are trout in Baker Lake and the fisherman will have to compete with local Osprey.

Great places to film a western in.

Incredible. The vistas are wonderful. Thank you for sharing the trip, and the fantastic photographs. I really like 100, and 101.

Beautiful. I love this virtual hike.

Thanks for another beautiful trek in the mountains, Barbara. I loved the chipmunk in the tree and the majestic peaks.

I had to look twice to see that this was a sheep - totally different from ours.

The scenery is breathtaking, especially in the last photo. Beautiful sheep and chipmunk too.

(Necky Becky has just told me that my face looks a bit like that mountain sheep's!!)

Gallow, I have been in this area some years ago, but the scenery never seems to change except for the expansion of the forests.

Leah, for now this is the only way I can drink in the beauty and splendour of mountains.

Teresa, I'm pleased to see you like the mountains as much as I do.

RuneE, Canada's domesticated sheep tend to have more woolly coats than these wild sheep do; although the Rocky Mountain Sheep do shed great clumps of it in the spring.

Diane, when fall comes the rams fight for their harems, and this male has quite the set of horns to butt heads with.

Raph, how cheeky of Necky to say so! I have always found giraffe's heads to have an elegance to them that other herbivores lack.

I love pictures of mountains. Yours are beautiful. And that's a great shot of the chipmunk. Cute little guy.

Lauren, when I choose the photographs to accent the post I try for the ones that best show the area or the creature that lives there. Several hours of research go into the hiking posts to ensure the mountain names, creeks, photo locations belong where they do rather than relying upon my memory.