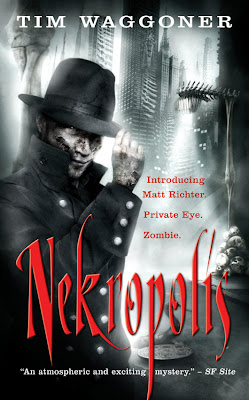 Nekropolis is a hard boiled crime mystery set in an urban fantasy landscape within a shadowy dimension separate from Earth. Matthew Richter, a cop from Cleveland, followed a murder suspect through a two-way portal into Nekropolis. There he ends up as a zombie working at the only business he knows: as a private eye.

Considered a rare entity as a self-willed zombie, Richter does favours for the creature citizens of Nekropolis in exchange for fees to purchase restorative spells. Now that they have begun to fail, every day he focuses on survival while searching for an alternative spell to preserve his decaying body.

A voluptuous half-vampire named Devona enlists his assistance in locating a magic crystal missing from her father’s collection. While unraveling the mystery of the disappearance of the Dawnstone, Richter finds more questions to every answer he uncovers. He follows the same method he used when he was a detective in Cleveland, while carrying a sense of responsibility from his former life.

The pace was steady, with situations and places explained in short bits of detail as the story moved forward while Richter put together his case. I had to keep reading to learn how Richter made out by the end.

Described in vivid detail, the different creatures such as the genetically enhanced shapeshifters and gangs of cyberpunk vampires, and the incidents within the story have a decided ick factor to them. There were episodes of humour throughout combined with the intriguing history of Nekropolis.

It’s an interesting book meant to be fun. I recommend this book for any crime, mystery, fantasy or horror reader who wants a taste of something a little bit different. As this is the first volume in a series with two follow-up novels, I look forward to the next.

Amazon.com
Posted by Barbara Martin at 01:03

I'm afraid I'm too old and old-fashioned and stick with favourites like Michael Innes and Isaac Asimov...

Sure sounds different. Don't think I have the stomach for a zombie book, but it sounds like it might be fun.

Man, there are quite a few of these urban fantasy series out there now eh?

While I don't like horror, I do like crime, mystery, and fantasy. Your review is intriguing. I may have to try this book. I am dying to find out what a "self-willed" zombie is.

RuneE, I was weaned on Asimov and Heinlein in my teens and loved their books. This book though was good fun with a sentimental ex-human.

Leah, some of the descriptions are so well written the reader can easily 'see' the creatures and their behaviour, thus creating the 'ick' factor. This book is like going into the horror show at the exhibitions and country fairs. Some surprises but overall good fun.

Charles, the publishers like and promote them. They keep saying they want new twists on the tried and true from authors. What better than this.

Teresa, the ick portions are small and the rest make for an interesting read.

Reb, it's written a bit tongue-in-cheek with humour throughout to make it fun.

Not my usual - but you make it sound very worthwhile, Barbara.

Cloudia, I know you are waiting for the review on the Ervin Laszlo book.