The Toss of a Lemon by Padma Viswanathan (Book Review) 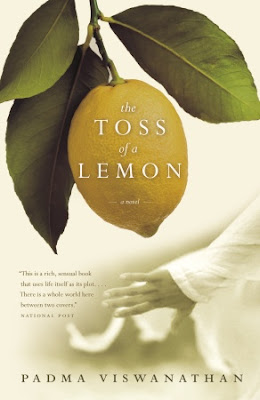 The Toss of a Lemon provides an excellent insight into Brahmin culture in the early 20th century spanning three generations. This is a compelling story of a family in the changing times of India through the fight for independence from colonial times.

The story begins in 1896 southeastern India with a marriage proposal, after careful astrological calculations, between Hanumarathnam, a young man with the ability to heal, and ten-year-old Sivakami, a girl who looks “capable of bearing great burdens.” They are married “like everyone else, at an auspicious time on an auspicious day in an auspicious month,” despite Hanumarathnam’s warning to his in-laws that he may die in the ninth year of his marriage.

It is the horoscope that dictates the destiny of Sivakami, widowed at age 19, and her children: a girl, Thangam, and a boy, Vairum. Thangam is a beautiful child whose skin gives off gold vibunthi (dust) with healing properties—a result of her father’s alchemist experiments; and Vairum is a math genius with a skin condition. Their world is one of rituals and superstition within the caste system which undergoes a transformation through the social movements and political events of India. Within all this lies a layer of magical realism woven into peoples’ destinies where there are undeniably forces beyond control that propel them forward.

Although the strict Brahmin caste traditions require Sivakami to shave her head, wear white and not contaminate herself with human touch between dawn and dusk, she rebels by choosing to raise her children in her husband’s home rather than returning to her family’s village to live with her brothers. Aiding Sivakami in this endeavour is Machumi, a non-Brahmin villager and closet gay man, who manages Hanumaranthnam’s real estate properties and business.

The complexity of the characters with rich descriptions of their interaction in a changing world is a work of brilliance. Ms Viswanathan describes in subtle detail each situation as it unfolds, providing just enough information and touches of humour before moving to the next keeping a reader enthralled. The pace allows the reader to savour while losing themselves within, experiencing the life of Sivakami and her family.

I recommend this book for anyone who wants to settle in a comfortable place to read a family epic filled with an intimate look into life in India.


Padma Viswanathan is a fiction writer, playwright and journalist from Edmonton, Alberta. Her writing awards include residencies at the MacDowell Colony and the Banff Playwrights' Colony, and first place in the 2006 Boston Review Short Story Contest. She lives with the poet and translator Geoffrey Brock and their children in Fayetteville, Arkansas.

Thanks for the book review, Barbara. It sounds like one I should put on my "to read" list!

Nice review. You do such a great job. Sounds as if I should find this one and pay it some attention! Thanks, Barbara. D

Teresa, this book is a treat to read. Once I finished the first chapter I was pleased that I had chosen it to learn something new about another culture. I will be looking at this author's work in the future.

Donnetta Lee, you won't be disappointed. The prose is refreshing and light.

Cloudia, it is, and the stories within are a real boost for creativity for any writer.

Sounds very interesting. It will be like looking into the lives of my ancestors! Will look for it.

Bindu, the book is excellent, a treasure to learn about the nuances of an exotic culture.