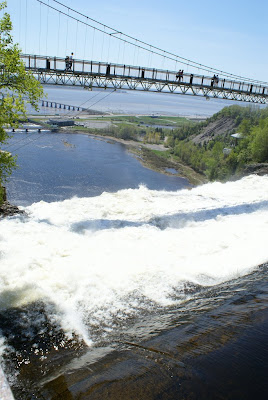 The falls, at 84 meters (275 ft) high, are the highest in the province of Quebec and 30 m (98 ft) higher than Niagara Falls. The Montmorency River flows into the St. Lawrence River near Île d’Orleans, northeast of Quebec City. The falls were named by Samuel de Champlain in 1613 in honour of Henri II, duc de Montmorency, who served as viceroy of New France from 1620 until 1625. 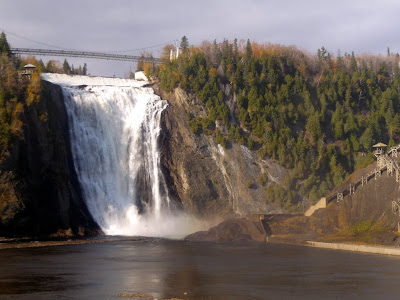 The falls are beautiful, Barbara. They look so cool, and it's a hot one here today, I'm imagining myself bathed in their cool mist. Very nice.

Wow! You show the beauty of North America beautifully!

I am planning to see these in person this fall. Your photos are so glamorous that I just know it will be a worthwhile trip.

Beautiful. Lana and I watched a special on Niagara falls today.

Speaking of falls, I went on the Maid of the Mist for the first time ever last summer!

This must of been a real site to see with the power of that waterfall :)

Very impressive Barbara - your photots capture a sense of the majesty of these falls.

Teresa, it is rather warm in Toronto too, and photos of waterfalls provide a sense of relief.

Rick, you must then post about how you felt once you reached the top of the staircase, and at each of the observation locations.

Charles, these are magnificent waterfalls.

Barrie, then you received an excellent misting of your person and a close up view of the power of the water as it descends.

Philip, I saw these waterfalls on a trip several years ago. They are truly an awesome sight.

Pam, the walkway above the falls is a difficult place to cross for those with a fear of heights, and the rushing water below makes it worse.

Probably be a rough ride going down those falls in a barrel.

Impressive - I would have liked to point a lens at that one!

Neil, I believe the pool under the waterfalls is 56 feet deep so a barrel might make it okay, though I could never see myself doing it.

RuneE, you should consider a trip over for a few select stops.