The Sawback Trail follows the rugged Sawback Range from the town of Banff to Lake Louise over a distance of 74km (about 45 miles). Side trips will increase the distance. The trail is rated moderate to challenging.

On Day 9 the hike leaves the Baker Lake Campground (Sk11) at about the 59.9 km mark to head for the Skoki Lodge covering a distance of about 6.4km to the 60.3 km mark. Skoki is a Potawatomi (Ojibwa) word meaning "swamp".* 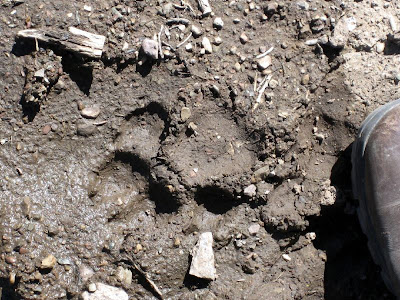 
The trail follows the north edge of Baker Lake (2210m) then climbs to the Ptarmigan Valley where Ptarmigan Lake is situated. Ptarmigan Lake (2345m) is a large sized backcountry lake with Brook Trout and Cutthroat Trout. It is located at the top of Boulder Pass underneath the northern slope of Mount Redoubt. 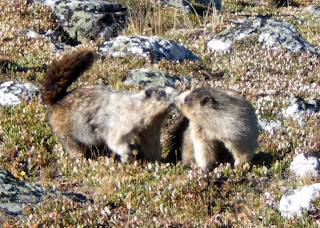 At the trail junction (1680m) with the Boulder Pass-Skoki Valley trail the distance from Baker Lake is 1.3km at the 62.1km mark. 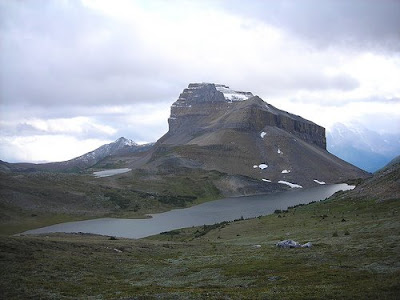 [106-Descending to Ptarmigan Lake with Redoubt Mountain 2902m (9521ft) in background. Redoubt Mountain was named by Arthur O. Wheeler in 1908 for the resemblance of a huge redoubt, or military outer defence.**]

The fish in Ptarmigan Lake are predominately Brook Trout that are considered frisky. 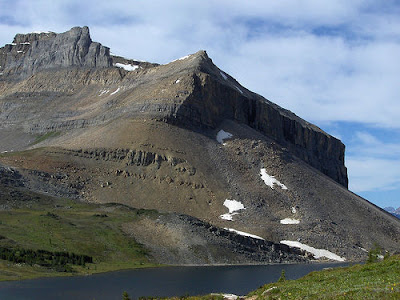 
Here the hiker will turn right to make the steep climb of 0.6 km to Deception Pass. 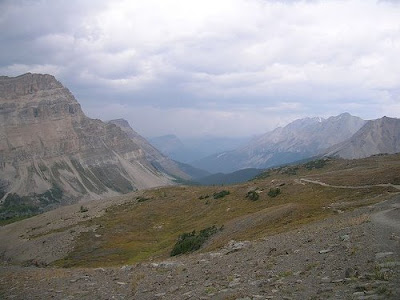 
From Deception Pass (2375m) the trail descends into the Skoki Valley heading north, over rocky slopes, alpine larch forests into thicker forest. Skoki Lodge (2165m) is 3.4 km beyond the pass. 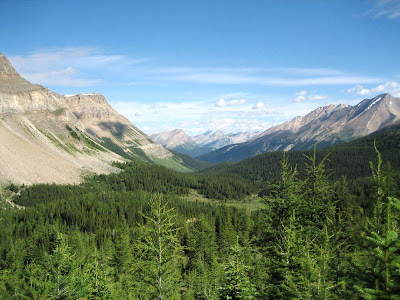 Follow the trail to a junction where the trail veers left after crossing a creek. 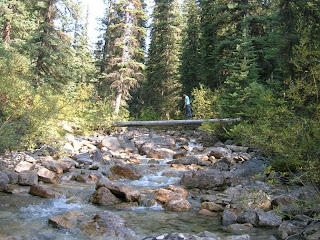 Stay on the trail going straight to continue on to the Skoki Lodge. In another 0.6km there is an intersection for the Red Deer Lakes. Stay to the left for the Skoki Valley where in another 0.5km the hiker will reach the main lodge, and the other buildings behind. 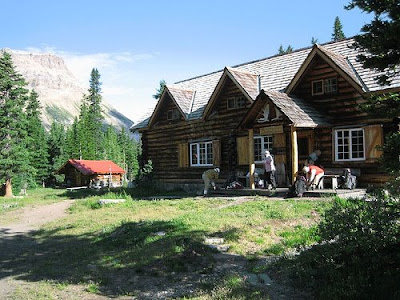 [111-Skoki Lodge is a National Historic Site built in 1930 by a group of Banff ski enthusiasts. It was enlarged to its present size in 1936 and continues to serve hikers and skiers throughout the year. Pack horses bring in supplies throughout the summer season.]

Tom Wilson (formerly with the NWMP) opened the first guide service in the Rockies after his contract as surveyor for the Canadian Pacific Railway was over. He guided Europeans and Americans on hunting, climbing and exploration trips into the wilderness areas between Jasper and Banff. He was the first guide to show adventurers into the Skoki and Baker Lake areas.

As always an interesting post chock full of terrific photos.

I recently finished Colin Fletcher’s The Man Who Walked Through Time and his trek through the Grand Canyon. I think you would probably enjoy the read if you haven’t already.

Beauty yet again. Maybe I'll get to see it some day. Hubby and I are thinking of buying an RV of some sort (see my post). Terrific pictures! D

Beautiful vistas. Two of our friends are in Banff this week, and we are extremely tempted to make a trip up north too, to hike before the summer is over.

Thank you for sharing the beautiful pictures, Barbara. I would love to stay at the Skoki Lodge, but I don't think my knees would make it if I backpacked in. Does one need to take a helicopter otherwise or is there access by road?

David, I have always wanted to take the mule ride down into the Grand Canyon.

Leah, the areas arond the Skoki Lodge provide for multiple side hikes.

Donnetta, there are many places to drive to in the Canadian Rockies.

Bindu, if you take a trip north you will escape the heat you're enduring.

All of the backcountry hikes require campground reservations made at least three months in advance. If you plan to go to the Skoki Lodge, check their link for possible free nights for accommodation and rates.

Teresa, there are several horse outfitters to take you the 11km from Lake Louise up to the Skoki Lodge. From there you could take some of the shorter hikes covered next week.

Riding in on horse back sounds even more fun!!!

That cougar track is cool. And I can see why they call that "redoubt" mountain. Wow.

What an unusual shape Redoubt Mountain is! I love the names of some of these places too. And the marmots look very playful and cute!

Teresa, then you're set.

Raph, wherever there are rocks and passes, there are marmots. They whistle alot whenever a hiker goes by, though they haven't caught on we're not likely to want to eat them like bears do.

These pictures SO make me want to be there!
Well, maybe the cougar footprint not ...
You know, I once lived in Skokie, Illinois, near Potawatomi Street.
It still used to flood in heavy rain, like the swamp it once was.

Cloudia, Ervin Laszlo has many books on the spiritual aspect of science.

Dina, when I was preparing the historical research portion of this post I came across James Foster Porter in the book: Canadian Rockies Trail Guide by Brian Patton, Bart Robinson, p.104, that "Porter, a mountaineer from Winnetka, Illinois, visited the region in 1911 and named many of the natural features, including the Skoki Valley. "Skokie", as he spelled it...would use the name again many years later when the Chicago suburb of Skokie was being created."

A very interesting post which brings back fond memories of a family trip we made from UK. We arrived at Calgary and coached through the rockies, via Banff and Hope down to Vancouver and Vancouver Island - long time ago - 1987!

Nik, any trip through the Canadian Rockies leaves an imprint of the experience. I can recall some of my earliest memories of camping on Tunnel Mountain in the mid-50s waking to the scent of pine trees, cold, crisp air and frigid water from the taps at the washroom facilities. My family would spend a month, sometimes longer in the mountains during the summer camping at different locations. In the early days, we would stop to visit Peter Whyte at his store in Banff. My grandfather had been contracted by the government to build bridges in Banff National Park, purchasing his dry goods supplies from Peter's father, Dave Whyte at his store in Banff.