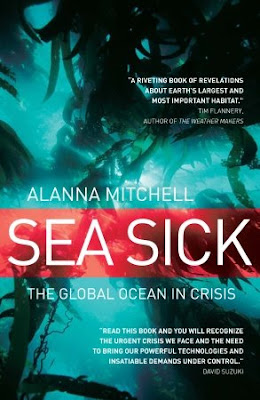 “Sea Sick is the first book to examine the current state of the world’s oceans — the great unexamined ecological crisis of the planet — and the fact that we are altering everything about them; temperature, salinity, acidity, ice cover, volume, circulation, and, of course, the life within them.

Alanna Mitchell joins the crews of leading scientists in nine of the global ocean’s hotspots to see firsthand what is really happening around the world. Whether it’s the impact of coral reef bleaching, the puzzle of the oxygen-less dead zones such as the one in the Gulf of Mexico, or the shocking implications of the changing Ph balance of the sea, Mitchell explains the science behind the story to create an engaging, accessible yet authoritative account.”

This is a serious book about the effects humans have made upon the ocean. Early in the book Ms Mitchell described a conversation with Tim Flannery in Whyalla, South Australia, wherein he related the ocean contained the switch of life. The switch can be turned off, and life as we know it will die. Humans will then be forced to adapt to a new way of life.

In a middle chapter, Ms Mitchell related information obtained from marine biologists at Dalhousie University in Halifax, Nova Scotia about the collapse of arctic cod due to over fishing. Their study revealed that populations of the larger predator fish in the ocean have decreased by 90% in five decades since modern industrial fishing became popular. Those predator fish presently in the ocean are smaller than their earlier representatives.

As humans are a part of nature they need to take a serious and thoughtful look at the oceans, which provide most of the air humans breathe. Reading this book will help you become more aware of the path we have set ourselves upon: one of no return unless we do something to change the direction. The first step is for each human to make a concerted effort in their own life to change, and then to get others involved.
I recommend this book for anyone interested in science, life in the depths of the oceans and our part.

Alanna Mitchell was the science and environment reporter at the Globe and Mail for fourteen years, until she left daily journalism to devote herself to writing on science. In 2000, she was named the best environmental reporter in the world by the Reuters Foundation and was invited in 2002 to undertake a guest fellowship at Oxford University. Out of this came her first book, Dancing at the Dead Sea, published in 2004. Mitchell is an associate at the International Institute for Sustainable Development and is a frequent speaker and guest lecturer on environmental issues. She lives in Toronto with her husband and two children.
Posted by Barbara Martin at 17:54

Thanks for this review Barbara. Never heard of this book before.

The book sounds interesting, Barbara. Is this the one you took the sentences from for your Two Sentence Tuesday?

Sekhar, this book was released in March 2009 so it's relatively new.

Teresa, yes, this is the same book.

definitely a timely book. I remember reading Rachel Carson's silent spring years ago. I want to check this one out.

(was at NOTL yesterday and remembered all your tales of battle up and down the Niagara!)

It's hard to know where to turn our attention first. We have done so much harm in our insistence of coming first in nature.

Thank you so much for this book review, Barbara. Wonderfully done, and I'm going to read her work. Nice to visit your blog again.

This sounds like very serious and timely material, Barbara.

Charles, you won't be disappointed in this book. It covers alot of areas to think about.

Gary, I must have been a teacher in my other life.

Maria, welcome, and thank you for stopping by.

Patti, I think one of the first steps is to ensure we do the right thing with our household garbage, the drinking water, and clean our living areas with non-toxic natural cleansers. Then become 'squeaky wheels' to government entities that can make changes to each of our countries.

Rick, very nice to see you surface again. This is a great book with much food for thought.

Raph, it is a book hopefully in time to get people motivated to do something to make appropriate changes.