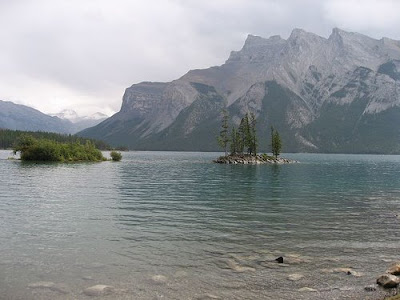 Considered to be one of the top ten Lake Trout fisheries in Canada, Lake Minnewanka is home to trophy size Lake Trout. The Lake provides excellent fishing for wild fish, where those fishing have caught lake trout (up to 45 lbs/20 kg), Rocky Mountain whitefish (to 5lbs/2.2 kg), and occasional bull, cutthroat and brown trout.

“Lake Minnewanka ("Water of the Spirits" in Nakota - the Stoney Indian language) is a glacial lake located in the eastern area of Banff National Park in Canada, about five kilometres northeast of the Banff townsite. The lake is 24 km (15 mi) long and 142 m (466 ft) deep, making it the longest lake in the mountain parks of the Canadian Rockies (the result of a power dam at the west end). The lake is fed by the Cascade River, flowing east of Cascade Mountain, and runs south through Stewart Canyon as it empties into the western end of the lake. Numerous streams flowing down from Mount Inglismaldie, Mount Girouard and Mount Peechee on the south side of the lake also feed the lake.

Aboriginal people long inhabited areas around Lake Minnewanka, as early as 10,000 years ago, according to stone tools and a Clovis point spearhead discovered by archaeologists. The area is rich in animal life (e.g. elk, mule deer, mountain sheep, bears) and the easy availability of rock in the mountainous terrain was key to fashioning weapons for hunting.

The western end of the lake can be reached by following Lake Minnewanka road from the Trans-Canada Highway. Boat tours are available near the parking lot. A hiking and mountain biking trail runs along the northern shore of the lake, passing Stewart Canyon and five backcountry campsites. Mount Aylmer which at 3361 metres is the highest mountain in this area of the park, is located a few kilometres north of the lake. 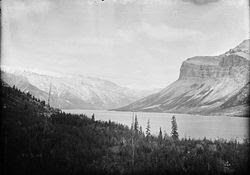 Dams were built in 1912, 1922 and 1941 to supply the town with hydro-electric power. The most recent dam (1941) raised the lake 30 m and submerged the resort village of Minnewanka Landing that had been present there since 1888. Because of the presence of the submerged village, submerged bridge pilings, and submerged dam (the one from 1912) the lake is popular among recreational scuba divers.”

Seems like a nice lake to stay by.
And by the way I do love fishing a lot :)

What a great scenery! And the trout must be perfect!
Thank you for posting it!

You have rejuvenated my desire to fish with all these great posts about wonderful lakes.

Scuba diving in an underwater village would be incredible.

you TORTURE us with these beautiful places...

Sekhar, every Tuesday is a fishing post about a location in Canada.

Maria, I have eaten trout from Lake Minnewanka and best cooked over a campfire.

Charles, fishing is a wonderful pastime to ease one's stress and getting back in tune with nature.

Bernard, there, you have your invite.

Gary, I find the photos of the pristine mountain scenery with sparkling lakes actually eases my wonderlust, somewhat.

I like these posts but in a way they are torture. I think you are trying to get me to pack up and move up north.

I really just need to plan a vacation to Canada, I think. But I think I'd need it to be month long!

You know, Barbara, if only we had a beautiful mind like yours in Detroit! Your descriptions could transform the stark reality of decay into the motivation to create a shining future.

Travis, as I love these areas I post about them. Before you consider moving to Canada, spend a week in Minneapolis in January. You might not like the cold or the snow or the frostbite or constant shivering. Besides, you need not move. Take a week's vacation at one of the places I posted about. Fish to your heart's content.

Alyssa, planning is half the fun. If you want a real rest and change a month is a good idea. I have been away from work for 2 1/2 weeks and feel like I might want to return to work (provided I don't have to lift anything ever again). Plan for a week, and if you like your trip, another trip can be planned for your return.

Rick, nice try, but I found (with little searching) the following wonderful parks:
-Fort Michilimackinac
-Grand Hotel on Mackinac Island
In Detroit:
-Anna Scripps Whitcomb Conservatory, Belle Isle
-Belle Isle Park has 1000 acres, 150 acres of protected wood, and a zoo, acquarium, conservatory and museum.
-Chene Park with seawall and walkways
-Tri-Centennial State Park, 31 acres on the Detroit River
-Huron-Clinton Metro Park.
There is your start for a shining future and I had nothing to do with it.

You could join in Travis' My Town Monday crowd and post about one of the aforementioned places. I'm certain it would be outstanding.

Webradio, welcome. Your comment is appreciated, and although my French is quite rusty I am able to roughly translate it.

For my english readers:
"Good evening. Very pretty photos. I will return to read (and translate) the text which accompanies. It is late."

Travis, my turn to be embarrassed as Canada is bilingual, as is the Province of Ontario. The federal government should have made learning French mandatory for everyone including the immigrants. I regret now that I didn't keep up with it after high school. At least I have had 'patte de grenouille' which tastes like chicken soaked in tuna juice. A delicacy to be had in Montreal.

Notice that none of the natural beauties you found in MIchigan were located in Detroit, which, as a Russian friend of mine says, resembles Warsaw after the bombing.

So our offer of you rebuilding Detroit's future stands, except on Devil's night!

Rick, I disagree on your comment about not finding any of the locations in Detroit, when, in fact, the list of parks under "Detroit" were found on the website;

which provides addresses in Detroit for those parks listed.

You know, Barbara, you are right. My next door neighbor told me that every now and then I should clean my glasses, and I think she's right! I yield.

Thanks for the correction.

Wow! Canada sure is beautiful. Wish it were warmer.

Shauna, the summers are nice across the country, as we live in a temperate zone. The winters can be quite cold, but if one wears proper clothing for season it can be fun playing in the snow.

The valleys in the Rockies can be very warm, although dry, with the higher elevations becoming cooler. The fruit belt of B.C., near Lake Okanogan, has a warmer climate in the summer than other areas: dry and hot. Not unlike California.

I like your sense of history, and the photos are fabulous!

Thanks for the ABC link. :-) You've touched my little heart!

Richard, the pleasure is mine to provide the link for what may be our last chance in saving the environment. It seems the majority of the human race is more interested in material goods and political banter, than saving their future through the environment.

Love your videos on your webpage. My french may be rusty, but at least I understood it.