Today's fishing post deals with a story of a different bend from the news.

On Saturday, August 30, 2008, the National Post had the following article released via the Agence France-Presse:

"The legend of the Swedish beast has swirled for nearly four centuries, with some 200 sightings reported in a lake in central Sweden. "On Thursday at 12:21 p.m. (August 28, 2008), we filmed the movements of a live being. And it is not a pike, nor a perch, we're sure of that," said Gunnar Nilsson, the head of shopkeepers association in Svenstavik. In the images filmed on Thursday and posted on a website dedicated to the Storsjoe, a long serpent-like being is seen swimming in the murky waters. "A highly advanced system on one of the cameras detected heat," indicating it was a living being, Mr. Nilsson said. The first sighting dates to 1635 and the most recent to July, 2007, with most speaking of a serpent-like beast with humps, a small cat or dog-like head, and ears or fins pressed against the neck.

Here is the weblink: http://www.storsjoodjuret.nu/ where they have the video surveillance films on the web for viewing. [Click the British flag on the upper right hand corner for translation.] On the first page in the green screen there is something unidentifiable, but looks like what may be a giant eel. I am not a marine expert. Don't take my word on it.

Check out the pages named following this link on the website's first page:

If this turns out to be a modern plesiosaur or some creature deemed extinct it would not be the first. After all, many other modern animal groups existed during the Mesozoic Era, such as crocodiles, lizards, snakes, and various fish. Most of these groups are well represented in the fossil record leading to the present time, but some creatures, such as the Coelacanth, discovered off the coast of southern Africa in the 1960s, (critically endangered) and Tuatara, in New Zealand, considered endangered since 1895, were once thought to have been extinct for tens of millions of years, only to be later found alive and little changed in modern times. 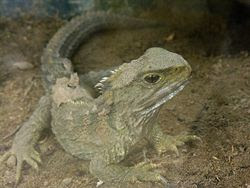 Ogopogo, similar to the Loch Ness monster in northern Scotland, resides in the Okanagan Lake in the interior of British Columbia, or so they say.

What do you think is in the video? Travis, you're the fisherman...

(Oh tee hee! Look at my stuff over there! Gosh, thanks!--Gary
PS-running a little contest with PRIZES at my blog today, too)

Steve, you have to appreciate the lizard from your neck of the woods. Have you seen one in the flesh?

Gary, of course Christmas is coming and everyone needs a unique gift to give.

I can't get the video site to load. Will try again later.

i have a lot of family in southern sweden, funny no one has mentioned it