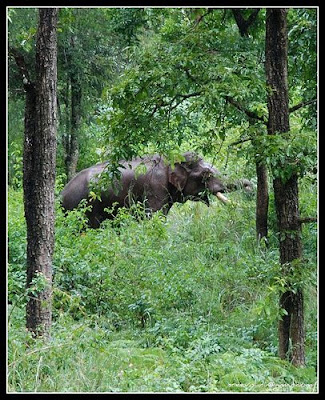 
On Saturday 13 September 2008 in Kathmandu, Nepal, police reported three wild elephants had entered the villages of Saptari and neighbouring Siraha districts where five people had been trampled to death while they slept and a fifth killed later the next day. The elephants had entered the villages from the jungles bordering India during the night, returning to the jungles in the day.

The local police set up a team to chase them away, as under Nepali law elephants are protected as an endangered species. 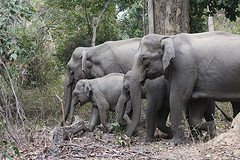 It is the shrinking forests and encroachment on elephant territory which has forced the animals to stray into human settlements looking for food, often resulting in attacks. 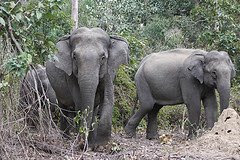 
A more detailed description of these magnificent animals from Wikipedia:

“The Indian Elephant, Elephas maximus indicus, is one of four subspecies of the Asian Elephant, the largest population of which is found in India. This subspecies is also found in Bangladesh, Bhutan, Cambodia, China, Laos, Peninsular Malaysia, Myanmar, Nepal, Thailand, and Vietnam. 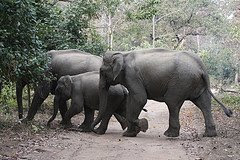 [4]
“Indian Elephants live in or near scrub-forested areas, although their habitat may vary. They tend to be nomadic in nature and do not stay in one place for more than a few days. They can live in jungles but gravitate towards areas that contain open space and grass.

"The Indian Elephant is up to 6.4 metres (21 ft) long; it is taller and thinner than the Asian elephant found in Thailand. The largest Indian Elephant was 26ft (7.88m) long, stood 11 ft (3.4 m), 9in (3.61m) at the arch of the back, and weighed 8 tons (17935 lbs). Indian elephants look similar to African elephants but they have smaller ears and shorter tusks. They are also the only elephant to be used by humans. 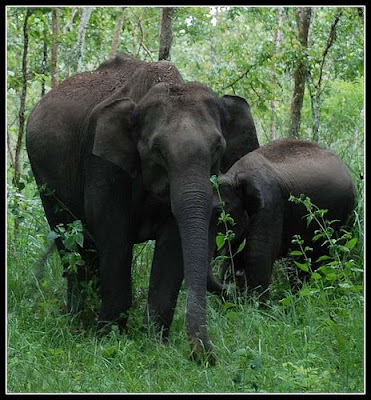 From previous posts readers will have noticed that I have a deep concern for the endangered and threatened species on this planet. When will the government authorities realize that if these species are not protected that humans will follow in their footsteps.

Elephants are amazing animals with incredible memories. A world without them would be a travesty but thats where we are headed. Sadly, When I was in Africa you could buy ivory just about anywhere.

Hallo Barbara, thanks for your comment on my blog!
I could sit all evening and study your blog! Your landscapes are amazing - and also your concern about endangered animals is very dear to me.
When you write about bears, I always think about the 5 bears they tried to repatriate in Austria. Every time when one of these bears kills a lamb on a mountain meadow, the whole country is stiff from fright that we all will be killed by the bears.
And soon they have killed all the bears although they are protected in Austria.
It's a shame!

The pictures are always wonderful in this blog.
Thank you to you and to testify against human stupidity.

human encroachment could soon wipe out all species, including our own...

It's a shame the elephants are endangered. They are magnificent animals. At the same time, I can sympathize with the Nepalese villagers. They must have been absolutely terrified. I know I would have been. Interesting post, Barbara.

Those elephants are beautiful. I'm so sorry to see such wonderful creatures being pushed out of their environment.

It's very sad the way the animals are pushed into small portions of jungle and can't adhere to their traditional travel paths - the paths they've learned from their mothers. The tiger is also suffering the same fate and can become man-killers because they're searching for food.

David, and they can paint too!

Maria, I looked up a report a university student did on the bears imported into Austria from Slovenia. It was the humans who had started the problem with de-sensitizing the bears to humans by having unguarded livestock and feeding roe deer in the forests. There was bound to be a confrontation. Then, there was the amount of range a bear needs to survive to feed itself and find a mate. To start a project with 35 bears and to end with none is purely a tragedy. Some of those who complained bitterly about the bears should have been sent into the Limestone Alps at night.

Read once that trained elephants understood more than 100 voice commands.