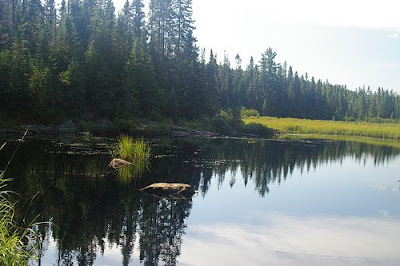 Algonquin is composed of 765,345 hectares in its vast interior of maple hills, rocky ridges, and thousands of lakes. The only way to explore the interior of this park is by canoe or on foot. 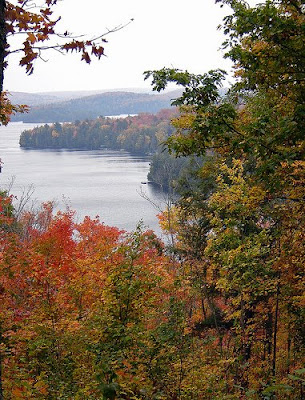 There is also a second Algonquin – along the 56-kilometre stretch of Highway 60. Here you can enjoy camping at one of eight campgrounds, hike on any of the 14 trails, or fish at one of the best trout fishing areas in Canada. More than 230 lakes have native Brook Trout and 149 have Lake Trout, which continue to provide good fishing due to the Park’s method of conservation.

Along the highway, many of the lakes are stocked with Splake (a hybrid of Brook and Lake trout) and fishing is outstanding. Spring is the best season for trout and summer brings on more enjoyment with Smallmouth Bass. 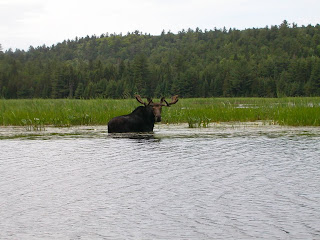 
There is a variety of wildlife, including good opportunities for seeing moose. Moose viewing is best in spring, early summer and during the mating season in late September. 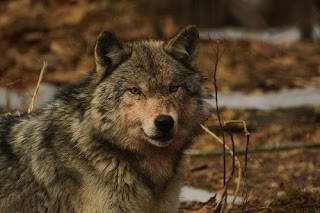 White-tailed deer and bear also inhabit the Park. Algonquin is famous for its wolves which are heard but not often seen. Park staff conduct wolf howling expeditions held every August. 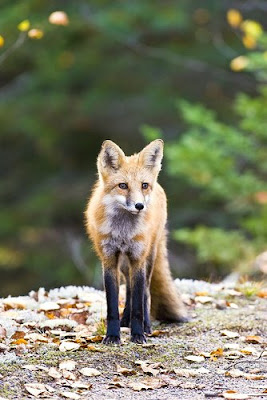 Some of the foxes in the park have a high tolerance of humans in the park, where some have received handouts and approach.

More than 260 bird species have been recorded in the Park. Many southern and overseas birders make special trips to Algonquin just to see northern specialties such as the Gray Jay and the Spruce Grouse, not to mention the rich variety of warblers or Algonquin's most famous bird of all -- the Common Loon, found nesting on just about every lake.

Babara you have a great blog here very nice nature pictures I have bookmarked it because there is so much to read and see VERY Nice!

What a beautiful place, Barbara. it must be amazingly quiet.

Now this is a place I have ALWAYS wanted to go. Unfortunately I have only driven by it on my move from Ontario to BC but it's a very special and gorgeous place. I have heard such wonderful stories.

Wonderful advice and yes, the light cleanses everything doesn't it?

You have a beautiful blog...your landscape shots are incredible especially the series on Og Lake campsite with the peak and the tent in the same shot...I also like the 4 wolves.

BTW thanks for leaving a comment on my blog and appreciate your adding us to your blogroll, I m doing the same as well. T stands for me (Thomas) and S stands for Shilpy (my wife).

This looks like a bit of trout fishing heaven.

Nice post. And excellent photos.
By the way which camera do you use?

Oh those shots are gorgeous. Just gorgeous. Something about the first pic nearly brought a tear to my eye. Thank you.

I love when getting up in the middle of nowhere by a lake and mountain, with everything still and silent, the ground fog clings to the lake surface.

maybe I do want to live in the country.

Thank you for giving us a glimpse of this amazing region!

thousands of lakes!!!! and this place is so close!

The fall colors are beautiful and the animals are wonderful. Looks like a great place to relax.

Philip, welcome, and thank you for your kind comments.

Debra, you hear only the sounds of nature: birds, wind rustling through the leaves, a splash in the water from a frog, beaver or fish jumping, crickets in the late afternoon toward evening. If you are fortunate, the barest snap of a twig in the bushes may produce a moose or deer.

Suzie, you can enjoy it here and perhaps return for a vacation. This is only the first post on this park.

Willow, it is. You can drive along Highway 60 where the lakes are up close. Stop and toss your line.

Sekhar, all photo credits are listed at the bottom of each post.

Frank. nice photographs always send my stress away. Then there is that temptation to plan a trip and go there to camp.

Leah, welcome. The first photo is like a large door has opened into another pristine world where you can almost reach out and touch it.
There is another photo of the same region with the same effect which I will post next week.

Bernard, unfortunately fog brings dampness into your tent and you have to get up to make breakfast.

That first stillness of an early morning before the birds awaken and sun tops the horizon, with a bit of chill in the air. Yes.

Patti, one can live in the country without being too far from a city's conveniences. You should visit someone who lives in the country, stay overnight to savour the experience; then repeat until you need to move.

Gary, what are you waiting for. The park remains open until October 13th in some areas, and others, all year for winter activities.

Anti-Wife, the colours are turning up there with a definite nip to the air and have barely begun in Toronto.

Steve, many trails to stomp on. I see you have recovered from your party.

You are not afraid by the wolves ???

On arriving at your blog and looking at the first picture I wondered: 'Have I died and gone to heaven whilst typing on my laptop?' Then the sound of the hoover in the room next door snapped me out of my reverie. Brilliant photos.

Afraid of wolves? No. I have seen a wild wolf up close (30 feet) during a very cold January in Edmonton. When the weather is in deep freeze there, the snowshoe hares come into the city for its warmth while the wolves follow. I had to prevent a mother with her young son from approaching one such wolf they thought a large stray dog. There is no mistaking those yellow eyes reflecting sharp intelligence.

Cuban in London, welcome. THe mist over the lake has just the right effect to catch your attention.

You show us the great places every Tuesday. Wish I was there because my live has been hectic as all get out this week.

Travis, come any time to unwind by viewing.

Always beauty and beauty, the wolfes, the lake.
Thanks.