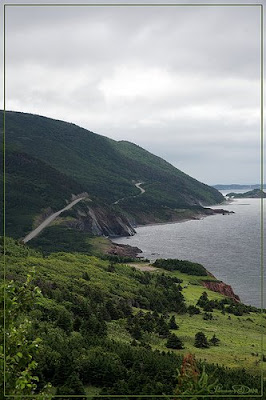 [1] The route measures 298 km (185 mi) in length and completes a loop around the northern tip of the island, passing along and through the scenic Cape Breton Highlands. It is named after the explorer John Cabot who landed in Atlantic Canada in 1497, although most historians agree his landfall likely took place in Newfoundland and not Cape Breton Island.

Construction of the initial route was completed in 1932. 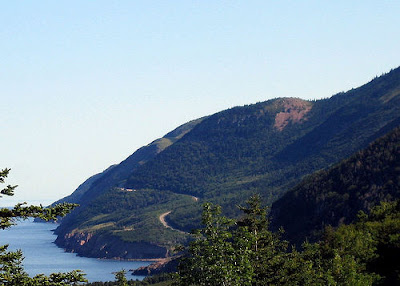 That would be a scenic place to ride a motorcycle.

Fascinating scenery. I always like to link the countryside/buildings etc. around with with history. It helps me understand things better. I don't know Canada so I will be back for more later!

what a great vacation that would be!

I could get some writing done there. Beautiful.

Charles, or a bicycle.

Gary, the sea air is good for all that ails you.

David, I like the sound of the surf on the rocks. Soothing, from time immortal.

my current part of the world, thx barbara...

if i'm lucky, i may head up that way for the celtic colours international festival next month [google for it]

Beautiful route! I'd also love to go by bycicle!

Tony, maybe you could do a post about the festival as it is bound to be quite exciting.

Maria, all that exercise would be worth it for the views.