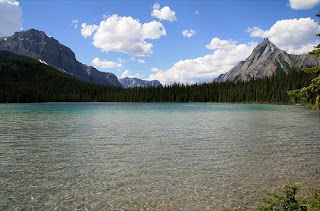 When hiking in the mountains, hikers need to apply to Parks Canada for a wilderness permit in advance. A link is provided on the sidebar for more information. The majority of the wilderness areas contain black bears or grizzly bears, and elk which Parks Canada and the Provincial Parks of B.C. and Alberta have information or restrictions with respect to these animals. They try to allow humans into the wilderness without harming the environment or bear habitat. Camping is allowed only in designated areas.

It should go without saying, that you have adequate water, food, clothing and equipment for your trip. You are responsible for your own safety. It is important to stay on the trails and not take shortcuts as this damages the environment: or you could become lost.

This first series of hikes is a 10-day backpacking trip from Kananaskis, along the Continental Divide to Yoho National Park. Today’s post covers the first day.

The trailhead is at the Mount Shark parking lot above Watridge Creek where the road from the town of Canmore along the southern side of the Spray Lakes Reservoir ends. The distance is 43km. 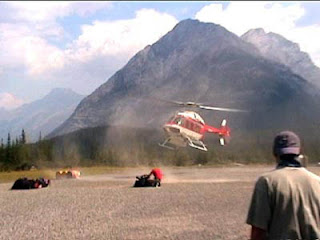 [1B -Helicopter coming in] The Mt. Shark Parking lot (off the Smith-Dorrien Road) has a heliport where you could catch the helicopter to stay at the Mt. Assiniboine Lodges. The helicopter only flies in or out three days per week.

A pleasant fire road follows enters the woods near Watridge Lake. The trail then drops down and crosses the Upper Spray River. After the second bridge over Bryant Creek you will go up a hill. The road to Trail Centre trailhead at the head of the reservoir where there is a large map and noticeboard. 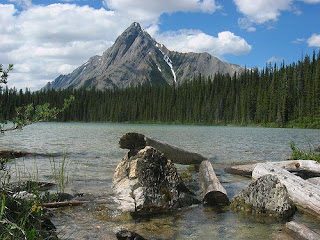 From here take the Watridge Lake Trail to the Banff National Park Boundary where there is a sign from ParksCanada about Firearm Restrictions, then continue on the Bryant Creek Trail to the shelter for another 8.5 km.


"The Bryant Creek with Cone Mountain and
Mount Mercer [2,970 m (9,745 ft), was named in 1918 for Mercer, Major-General M.S. (Major-General Mercer commanded the Third Division of the Canadian Expeditionary Force. He was killed in action near Zillibeke, Flanders in France in 1916.) WW I Official name. Major-General Mercer was placed in command of the 3rd Canadian Division in Dec 1915. He was killed on June 2nd 1916 at Mount Sorrel. He was the highest ranking Canadian killed in the Great War. To the north and Mount Turner [2,813 m (9,229 ft) located at the Upper Spray River Valley south of Bryant Creek; named in 1918 for Turner, Lt. General Sir Richard Ernest William (Lt. Gen. Turner was a well respected Canadian soldier.) Mount Morrison and Mount Turner are part of the Park Ranges and lie beyond the Spray River (Mount Shark and the Spray Range are east of the Spray River Valley). The two mountains stand together, between the valleys of Bryant Creek to their north and Currie Creek to their south. This is no coincidence as Lieutenants Morrison and Turner fought side by side in 1900 with the Royal Canadian Dragoons during the South African War. They were under the command of Brigadier-General Horace Smith-Dorrien.

"The Dragoons were a cavalry unit and had been ordered to cover the retreat of a British "search and destroy" column which was operating in the Komati river basin. The retreat was a slow operation as the column's "baggage train" was made up of wagons pulled by oxen. With only a single colt machine gun, the Dragoons were not in a strong position to defend the column. Lieutenant Morrison wrote, "I turned in my saddle and... Square across our rear a line of Boers a mile long was coming on at a gallop over the plain, firing from their horses. It looked like the spectacular finale in a wild west show. They were about 1500 yards away, but coming on rapidly and shooting at our gun, most of them, to try and stop it... I thought indeed we saw our finish."

"Two troops of the Dragoons, one under the command of Lieutenant Turner, dismounted to try to hold off the attack. For his part in the action Lieutenant Turner was awarded the Victoria Cross, the citation reading, "When the guns were in danger of being captured, Lt. Turner, although he had already been twice wounded, dismounted and deployed his men at close quarters and drove off the enemy, thus saving the gun.""* 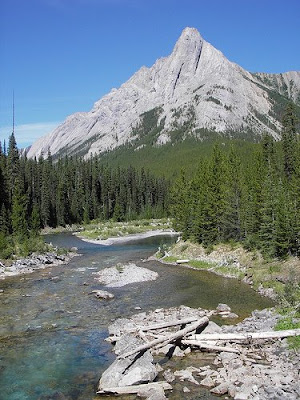 That little creek? I want to picnic RIGHT there with my toes in the water.

WOW! Love that pristine scenery! My kind of place. So much better than cities!

cool, but no way i'm going into bear country without a gun!

That scenery reminds me of the South Island here. I'm hoping to get out for a few good tramps this coming summer!

What beautiful scenery, just lovely. I want out of the city!

Gary, if you put two beer bottles in that stream they would be chilled in no time at all. That water is FRIGID.

J.L., cities do tend to be crowded. In the summer this particular trail is quite popular, so you are guaranteed to see some people every day.

Tony, I've gone into bear country without a gun. (Ferrel, be quiet.) The only times of year bears can be more grouchy than usual is in the spring after they've come from their dens and are starving; they have cubs; during the times the berries become ripe and they like to gorge themselves.

If the various areas become overcrowded with bears, the Parks close down the trails to reduce the risk of confrontations. If a hiker sees a bear or bears they are to report their sightings to the park wardens.

Steve, walking is very good exercise and wilderness scenery food for the soul.

Linda, mountain scenery does that to me too. I'm hoping I can save enough pennies for one of those fly ins to Mt. Assiniboine next year.

reporting's kinda hard once you're mangled... or dead :(

not that any gun is a guarantee, either....

A challenging but gorgeous hike. Barbara, are hikers allowed to protect themselves from bears in Canada, or are they expected to simply strip so their clothes don’t get caught in the bear’s teeth like down here in California? :)

Tony, Bernard, there is a bear pepper spray repellent which is recommended by Parks Canada. I have added a link to their Bear Management site, which explains how to deal with bears in the wilderness. Apparently, the bear spray is quite effective providing an imprint on the bear that a human is somewhat like a skunk.

As for a gun, it would have to be the proper calibre to bring down a bear in one shot; and steady aim and nerves on the part of the human.

I have been in the wilderness a few times and only saw a mother bear with cubs, once, while staying at a motel near Sunwapta Falls (Jasper). I backtracked to the motel post-haste while watching her meander away with her cubs into the brush further down the road.

Tony, there aren't that many bear attacks due to their numbers dwindling, as is their habitat. Usually it's because the human was not paying attention to their surroundings or making enough noise to warn the bear ahead of time.

That's quite the hike! It looks stunning. Is it very expensive to catch the helicopter and stay at the lodge?

true barbara... but there is always the chance of a 'surprise' meeting

As to nerves and Grizzlies: A good friend of mine who used to fly jets off of carrier decks (speaks to nerves) shot an Alaska Brown in the Aleutians a few years back -- with bow and arrow. A big one. A very big one. Boone & Crockett big.

David, I have put a link into the CONSERVATION AND NATURE section on the sidebar for Mount Assiniboine Lodge which covers all queries.

But for a quick rundown of prices:
In summer it will be $245-$400/night per person, $175/night per child. Plus tax. There are rooms in the lodge and in cabins. There are showers/saunas available.

Helicopter access from Mt. Shark Heliport is $125 one way plus tax.

The lodging prices include lodging, hiking guide services and all meals (set meal with wine or beer and other beverages).

Like you, I prefer a civilized way of adventure over the more rustic method of having to do without hotwater.

Tony, risks are a part of life. A surprise meeting would provide that opportunity of your preparedness for such a meeting.

Chris, those Alaskan Browns (Kodiak Grizzly) are the biggest of the big bears. They make the silver-tipped grizzlies look like black bears. Your friend must have nerves of steel, although I suspect he is very confident about his abilities and has courage when needed.

Oh, and what a treat it is for me to join your trips! :)
Have a nice week!

Webradio, welcome. The wide open spaces are a great place to relax.

If I weren't such a city girl I would *totally* go on this hike. The pictures are gorgeous! But I don't do so well with the whole "carry your own toilet paper" adage.

Britta, it's not only toilet paper you have to carry, but a little garden trowel (plastic if you can find one) to dig a 4" to 6" hole to place your nature call in. Then you have to cover it up with the dirt you removed but not tramp on it after. This is if you are in between the pit toilets at the campgrounds.

Or there are locations that expect a hiker to carry out everything they carried in. The key word here is "everything" which means special double plastic ziplock bags.

To avoid all this, you could take that swanky fly in to Mount Assiniboine Lodge and leave your toilet paper at home.