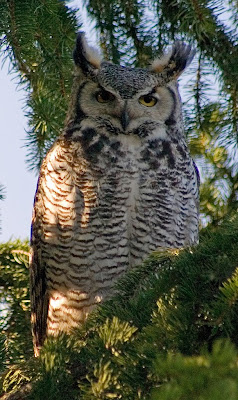 [68-Great-Horned Owl. This bird lives in a varied habitat of woodlands, desert and urban areas. With a voracious appetite it hunts squirrels, rabbits, snakes, skunks and geese. Click to enlarge.]

On Day 7 the hike will be passing over Pulsatilla Pass (2545m) to the Wildflower Campground (Ba15) covering an approximate distance of 10 km after leaving the Badger Pass Junction Campground (Jo29) at the 43.5 km mark. 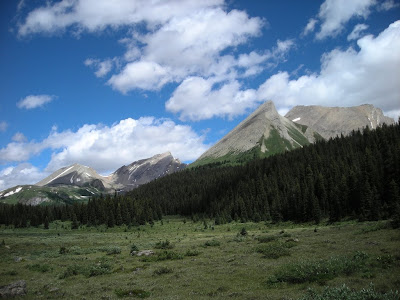 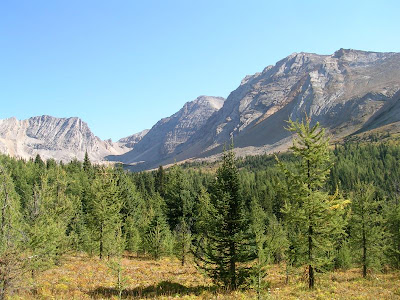 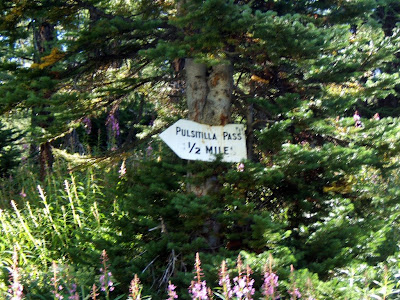 
There are open meadows and larch stands enroute to Pulsatilla Pass. 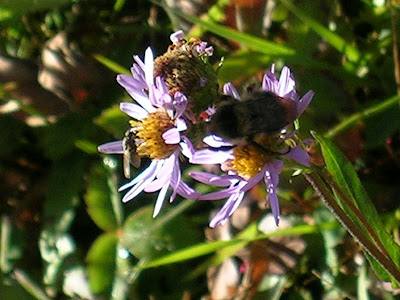 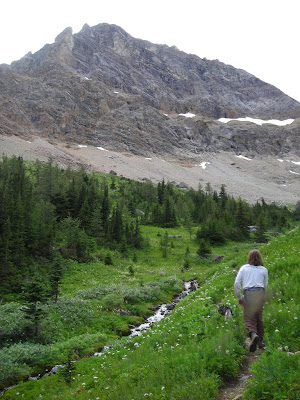 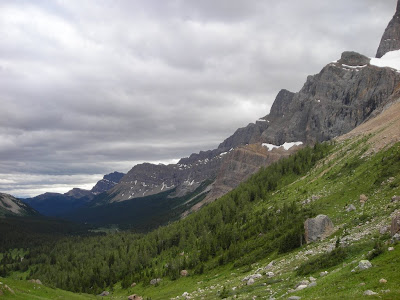 On the ascent to Pulsatilla Pass, stay left beneath the glacier draped cliffs of Pulsatilla Mountain and follow the trail that climbs to the obvious low notch. 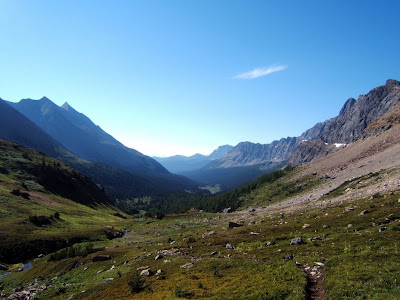 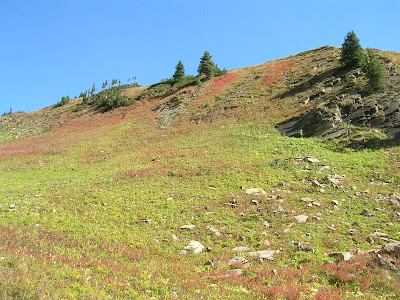 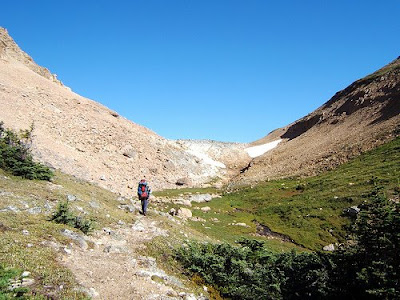 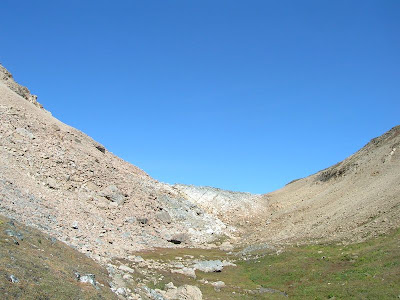 
Pulsatilla Pass with an altitude of 2345m is a large open area with many vistas. A large alpine lake sits above treeline at the north end. 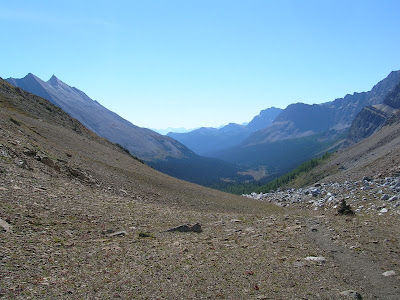 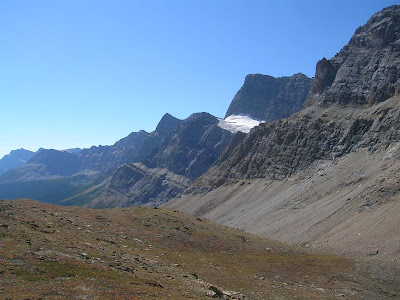 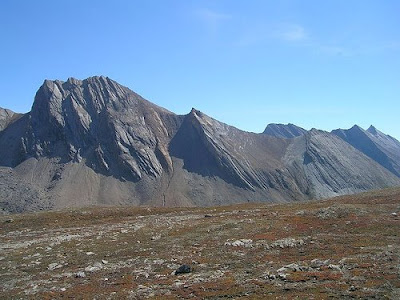 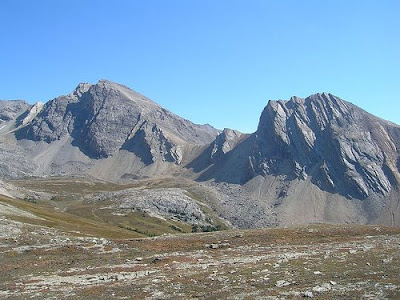 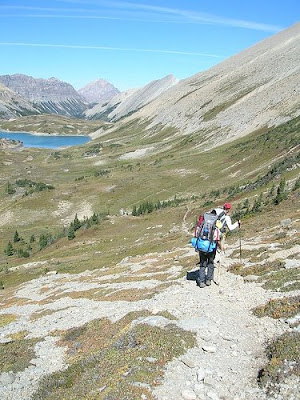 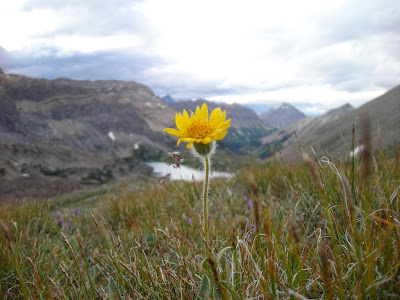 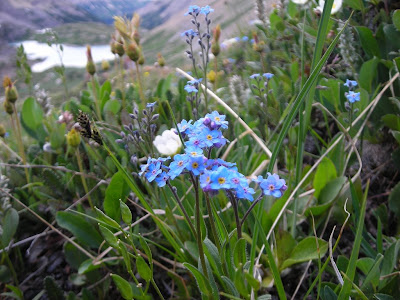 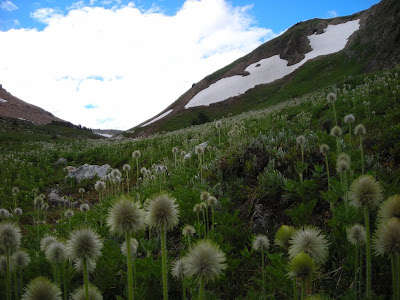 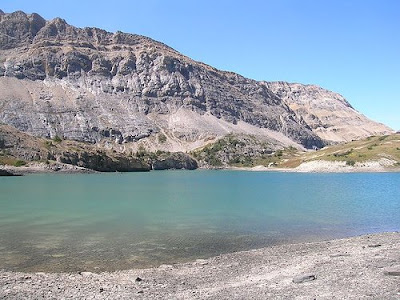 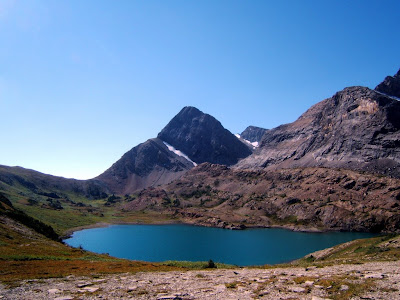 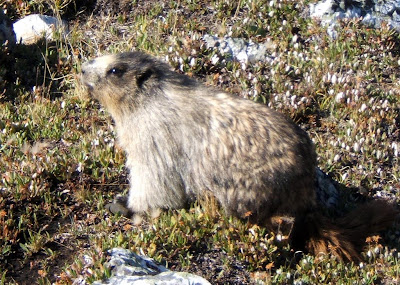 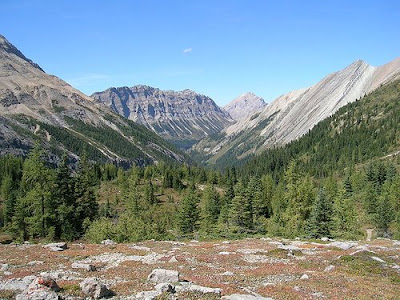 
The trail is very rough and steep here, dropping down the narrow Wildflower Creek valley to Baker Creek and the Wildflower Creek campground (Ba15). This is where the hiker's compass, map and route finding skills will come in handy. 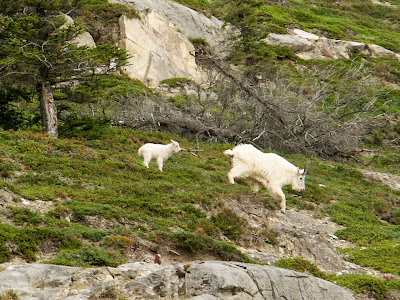 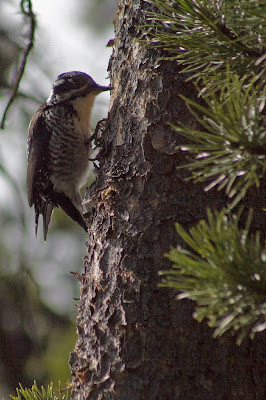 [93- Downy Woodpecker. These are the smallest of the woodpeckers in North America. The males have a red patch on the back of the head. - click to enlarge] 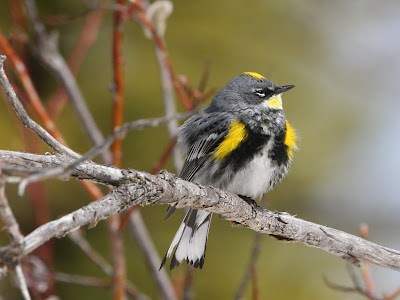 [94 - Yellow-rumped Warbler can be found in the summer across the north and western portions of North America, and in the fall it migrates south to Central America. It eats insects, spiders and berries. This bird prefers a habitat of coniferous and mixed woodland, parks and gardens. - click to enlarge] 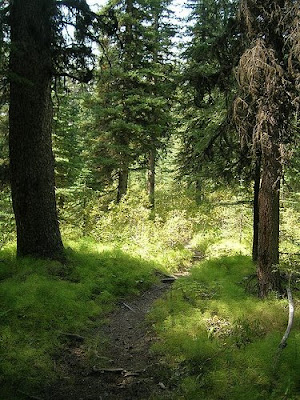 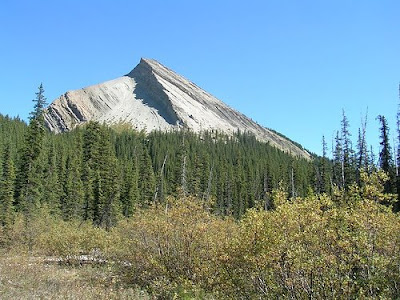 Thank you for allowing to join you on this splendid hike to Pulsatilla Pass. As for strong beginnings to hook readers, that picture of the owl hooked me alright. Now the challenge is write a descriptive sentence about an owl to have the same effect! Hey, I think an owl-sentence is a good way to start a dark fantasy novel!

What terrific photos almost to the top with the long shot of the lone trekker.

Incredible photos! Well done. It looks like a fantastic place to hike.

Awesome photos! What a trip! Glad you included photos of birds and animals too. As a first time published author it's a great resource to find blog sites like yours. tCheck out my first and recently released novel, Long Journey to Rneadal. This exciting tale is a romantic action adventure in space and is more about the characters than the technology.

I foolishly clicked on the owl's picture to enlarge it when it looked intimidating enough as it was :-). I enjoyed the rest of the photos very much. Many thanks for this fantastic tour.

Thanks for the morning ramble, Barbara. I loved the owl and the other birds, as well as the gorgeous mountain scenery.

You can definitely see how glaciers have shaped that habitat. We have seen a type of downy woodpecker down here but they are fairly rare.

Oh, that was a magnificent hike. Love the marmot. The owl was terrifyingly beautiful.

Eleanor, that might be a good idea about the owl, but unfortunately there are no owls in the first novel.

David, you must be itching to go to the Canadian Rockies by now. How many more posts will it take?

Gallow, welcome and thanks for stopping by.

Sharon, nice of you to drop by and comment.

Cuban, I'm glad to be able to entertain you will photos and narrative.

Teresa, I'm always on the lookout for flora and fauna on specific hiking trails.

Charles, you're correct about the glacial action. It hasn't been that long since there was a glacier in the pass, as the vegetation hasn't encroached enough.

Leah, I found the owl to be magnificent, a perfect addition to this post.

Robb, don't overdo your new found energy. I'm glad you find the tonic works. It's also a good idea to keep well hydrated while taking it.